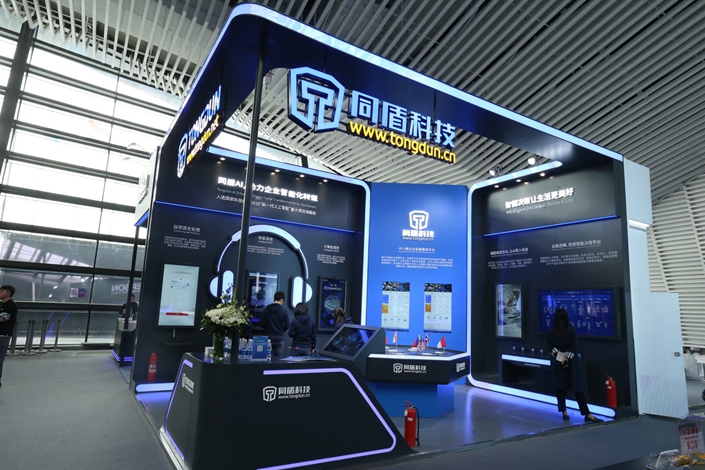 While CCTV did not specify the company in question, they illustrated the story with a screenshot of a Tongdun data product in their broadcast, and Caixin has confirmed that the accused company is Tongdun. Reached by phone on Wednesday, Tongdun CEO Jiang Tao told Caixin that “(everything) remains normal.”

But the news has sent a shockwave through the industry, as the sum of 900 million yuan accounts for most of Tongdun’s revenue. According to a presentation document the company prepared this year for its Series E financing round, seen by Caixin, Tongdun booked around 510 million yuan in revenue in 2018 and had expected to rake in 980 million yuan this year.

China has been clamping down on illegal fintech for more than a year. Lately, authorities have focused on predatory lending, a practice in which unscrupulous lenders use various means to deceive or coerce borrowers to take out loans they don’t need or can’t afford, and that carry unfair or abusive terms. To find customers and control lending risks, the firms leverage data that’s been collected illegally and pay for support services from companies that provide technology and data solutions.

Tongdun, founded in 2012, was an early entrant to the sector and quickly became a darling of the online lending industry. It has secured more than $200 million in investment through several rounds of fundraising since 2013. Temasek led a funding round in Tongdun in 2017 along with two Chinese investment firms. U.S.-based investment firm IDG Capital has also provided funding for the company, public records show.

Big data companies engaged in data gathering, mining and analysis have mushroomed in China since 2013, coinciding with a boom in the online loan industry, which has a voracious appetite for customer data. Lenders often employ the services of data companies that scour the internet to collect personal information, such as names, locations and phone numbers, in a bid to market their loans, identify fraudulent borrowers and assist collection of unpaid debts.

Police are cracking down on a group of data companies that provide technology or data services to predatory lenders, China’s Ministry of Public Security said at a briefing in Beijing last month. The ministry didn’t disclose any names, but a source close to the ministry indicated that those involved included Tongdun, Shanghai Xinyan AI Technology Co. Ltd., and Hangzhou Mojie Data Technology Co. Ltd.

Caixin has learned that warrants have been issued for the arrest of Shanghai Xinyan CEO Huang Xiangqian and Hangzhou Mojie CEO Zhou Jiangxiang. It remains unclear whether or not they have been taken in by police.