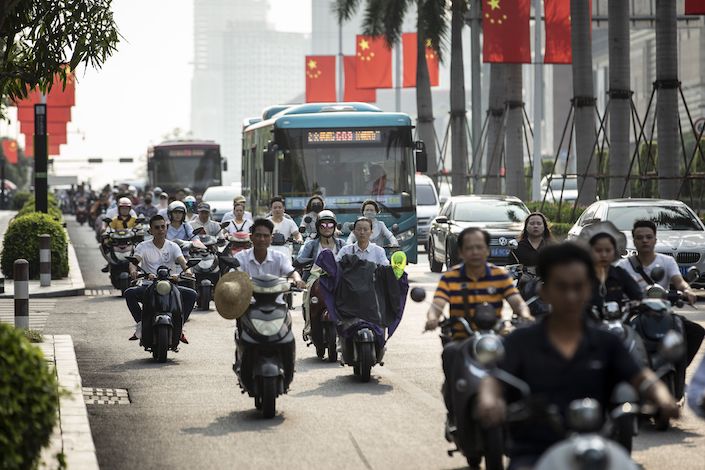 Morning commuters on motorbikes travel down a main thoroughfare in Nanning. Photo: Bloomberg

(Bloomberg) — Young consumers across China’s smaller cities have emerged as a spending force and a bright spot for businesses scouting for opportunities amid the broader consumption slowdown.

Compared with their counterparts in major cities, these small-town consumers have higher disposable incomes, lower costs of living, shorter commutes to work and more leisure hours, according to a report by consultancy McKinsey & Co. Mostly between 18 and 34 years old, this segment constitutes just a quarter of the population but was responsible for 60% of spending growth in China last year, the report shows.

The findings spotlight the need for global companies to look beyond the metropolises of Beijing and Shanghai and invest in expanding in the Chinese hinterland. Tapping these lower-tier cities and towns will be key for businesses looking to combat the slowest economic growth in China since 1992.

“This segment is relatively unaffected by the trade dispute,” said Felix Poh, a Shanghai-based partner at McKinsey who co-wrote the report. “Over the next two or three years, these young free spenders are likely the most important segment for consumer companies to focus on.”

Such buyers from smaller towns such as Mianyang, Yancheng and Zigong are the exception to broader findings of growing caution and anxiety among Chinese spenders at large, according to the report. It surveyed 5,400 respondents across 44 Chinese cities between May and July this year.

To reach this group, companies will need to revise and customize strategies that which were mostly designed for bigger cities, Poh said. Special focus should be on distribution channels and engagement on social media platforms, he said.

“Multinational companies need to find the right balance between empowering the local team and ensuring some minimum standards for global consistency,” Poh said. “They have to realize that what perhaps has served them well in the higher-tier cities may not necessarily work in the lower-tier cities.”