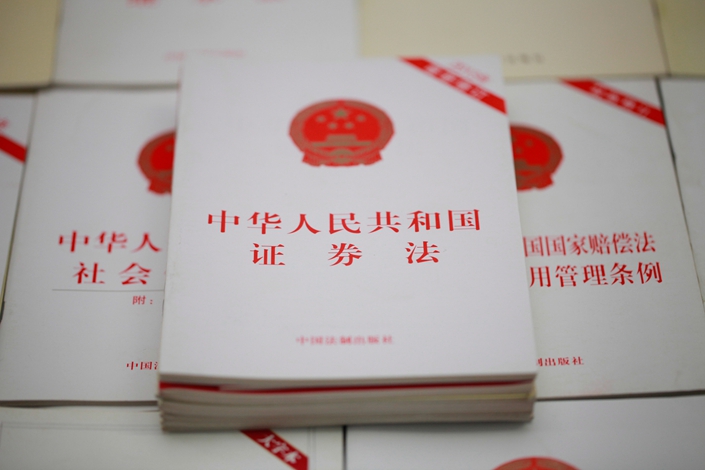 The Standing Committee of the National People’s Congress is deliberating on draft amendments poised to change the fundamental laws governing China’s capital markets.

Amendments to China’s Securities Law have rumbled on for five years, but are now hopefully nearing a conclusion.

At a meeting scheduled to run from Dec. 23 to Dec. 28, the Standing Committee of the National People’s Congress has been deliberating on draft amendments that are poised to change the fundamental laws governing China’s capital markets. The draft has moved into a rare fourth reading just eight months after passing its third reading in April, a sure sign that legislators are keen to push it through.

Chinese lawmakers have rarely seen an amendment take as long and as winding a path as this one. The original Securities Law was enacted in 1999 and underwent major changes in 2005. Since then, China’s capital markets have developed rapidly, new financial products have emerged, and regulatory methods and mechanisms have changed, making further changes to the law increasingly imperative.

The current draft amendment passed its first reading in April 2015, but was shelved amid turbulence in China’s stock markets later that year. News of the law’s progress thinned out after its second reading in April 2017, until the third reading was finally held in April 2019. Some legislators say even now that the draft amendment is incomplete and lacks consensus on many controversial issues. This shows that even if it is passed, the new Securities Law will still have inherent shortcomings that will require further overhauls in future.

China’s securities regulators don’t have it easy. That’s reflected in the fact that while the new law seeks to satisfy capital markets’ desperate yearning for the rule of law, it consistently struggles to achieve long-term efficacy. There are three deep-rooted reasons for that.

Third, securities legislation is just a part of China’s ongoing shift toward rule of law. This means it doesn’t progress in isolation. For example, investors have pushed for collective litigation for years, but have been repeatedly left disappointed — not because of the Securities Law, but because collective litigation still lacks a basis in China’s Civil Procedure Law.

To its credit, the version of the draft amendment currently open for public comment both reflects the development of China’s capital markets and responds to the calls of all parties involved. It includes a special section on the registration system for Shanghai’s new tech board, known as the STAR Market; brings depositary shares under the scope of securities; and strengthens the policing of securities violations. But the draft still carries a strong stench of institutional control.

Perhaps that is because the securities market has long been sprawling and chaotic, leading many people to demand that securities regulators expand their powers. Nonetheless, the new law should not just be a means of supervision and regulation; it should also be a way to further propel the development of the country’s capital markets. The issue at the heart of China’s economic reforms is the boundary between the market and the state. This issue is even more prominent in the capital market, where dealers, investors and regulators focus on money rather than concrete goods or services.

In fact, the question is not about the overall expansion or reduction of regulatory powers. It is about where and how to deploy them. In China’s bond issuing system, the Stock Issuance Examination and Verification Committee plays a significant role, and regulatory departments wield unchecked power. The result: rampant corruption, the fall of a succession of high officials, and profound lessons for all concerned. Any amendment to the Securities Law must balance the need to fully respect the laws of market development with the need to ensure that regulators use their powers properly.

The amendment to the Securities Law is no exception. For instance, many people approve of expanding the definition of securities. Originally, this was a golden opportunity to raise the standards for unified legal applications, provide coordinating regulators with legal safeguards and avoid regulatory arbitrage. But the debate essentially became a power struggle between different departments. The current document, which adds depositary shares to the existing legal definition and is expected to incorporate wealth management products as well, is a significant breakthrough, but remains a far cry from so-called “broad securities.”

Do these and future amendments to the Securities Law deliver on lawmakers’ original promises to standardize the behavior of securities issuances and deals, protect the legal rights and interests of investors, uphold society’s market order and public interests, and promote the development of the socialist market economy?

Chances to change the law don’t come around that often, and significant questions should be met with decisive policy. Even though it is impossible to achieve perfection now, we must leave room for future amendments. For example, the significant reform of the registration system, which is currently being piloted, should have a legal basis. But all kinds of details in the system are still being explored. The Securities Law should guide and promote those reforms.

Sweeping changes to the Securities Law should go hand in hand with corresponding tweaks to the regulatory system in order to speed a broader transition toward more functional regulation. Indeed, speeding up this transition is a key focus of the amendment.

Investors naturally gravitate toward increased regulatory powers when they help to deal with listed companies that repeatedly falsify issuances, fake their finances, engage in dodgy dealing or falsify disclosures. They also like it when regulatory institutions go into secondary markets and root out behind-the-scenes deals, market manipulation and other illegal behavior.

However, some regulatory officials remain too obsessed with improving the perceived “quality” of listed companies and replacing stable financial markets with stable stock markets. This is a mission that regulators cannot and should not shoulder, and the Securities Law should resolve this tension by drawing up new standards.

Finally, the new Securities Law should give greater prominence to the investor protections. The draft open to public comment stipulates that the issuer’s controlling shareholder, actual controller, relevant securities company, and securities service may entrust an investor protection organization set up by the government to first compensate investors who have had their rights and interests violated. This kind of measure is helpful for strengthening investor protections, but the difficulties of filing complaints and producing evidence will continue to make life hard for the majority of small and midsize investors, stymying the pursuit of substantive equality between shareholders.

The protracted amendment to the Securities Law also reveals the difficulties that China has as an emerging and transitional economy. Legislators face two tough choices. If they pursue legal stability, they may fall into abstraction and damage the law’s efficacy. If they pursue targeted applications, then they may lose themselves in detail and trivialize the value of the law. If this dilemma is to be resolved, the Securities Law must rise above detailed debates over specifics and the territorial disputes among the financial regulators, and seek to understand and clarify the boundary between the state and the market.