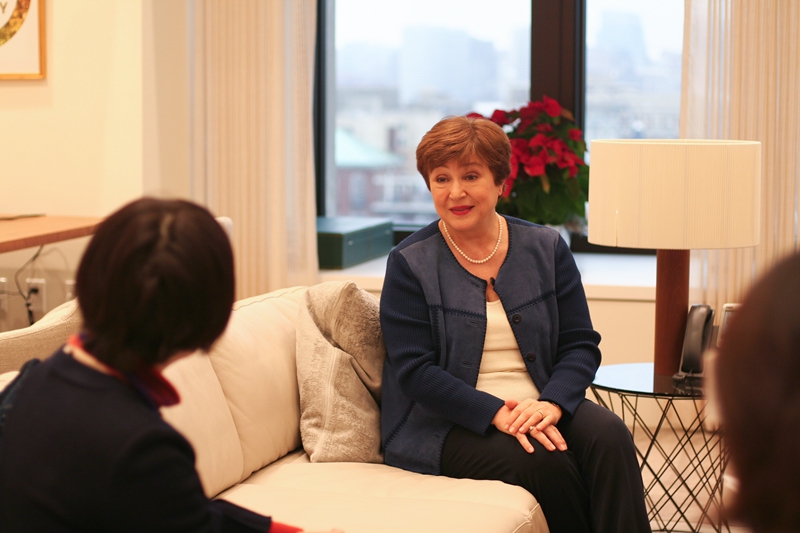 The new head of the International Monetary Fund called on Beijing and Washington to pursue their bilateral trade talks beyond the agreed phase one deal in an effort to support world economic growth amid downbeat forecasts.

In an exclusive interview with Caixin Media Dec. 16 in Washington, IMF Managing Director Kristalina Georgieva said the U.S. and China should continue the trade talks and expand them into issues vital for the global trading system, including intellectual property rights, the service sector and e-commerce.

She also predicted that with the phase one deal in place, China’s economic growth would rise to around 6% in 2020 from the IMF’s October projection of 5.8%. She said she expects the two countries to seize the opportunity from the phase one “trade truce” and push for “trade peace” to boost the world economy.

“We look forward to seeing a continuation of discussions between the U.S. and China,” Georgieva said. “This is a trade truce. To sustain a positive impact for the world economy, we need to go from trade truce to trade peace.”

Georgieva’s comments came after Beijing and Washington announced a phase one agreement Dec. 13 in which China agreed to make purchases from the U.S. and further its market opening in exchange for an American rollback of tariffs.

On Thursday, U.S. Secretary of the Treasury Steven Mnuchin told CNBC that the phase one deal, currently in a process of “technical, legal scrub,” will be signed in early January.

In the interview, Georgieva praised Beijing’s determination to move from high-speed growth to high-quality growth and to liberalize its market step-by-step to create a level playing field for domestic and foreign companies. But she also said it is critical for China to step up efforts on environment protection and social sustainability.

Georgieva was asked about accusations that China uses “debt trap” diplomacy abroad, including in Africa, providing financing for infrastructure and other projects as a way of getting indebted nations to support China’s geostrategic interests.

The IMF chief responded that borrowing can help create jobs and investment in infrastructure in the host countries and said that countries should be transparent on debt conditions, including borrowing sources, investment destinations and repayment capabilities.

The IMF has been working with the Bank for International Settlements on guidelines for regulating digital currencies. Central banks and finance ministries around the world have expressed strong reservations about digital currency initiatives such as Libra, a blockchain digital money proposed by the U.S. social media company Facebook, she said.

With respect to the IMF’s role as “reliable anchor” in the international monetary system, Georgieva said she is determined to work with member nations to push forward the 16th quota reform, scheduled to be completed by Dec. 15, 2023.

The IMF’s quota system ranks member countries based on their position in the world economy. The quotas determine nations’ financial contributions to the IMF, their voting power and their access to financing, according to the organization’s website.

As the IMF’s first managing director from an emerging-market economy, Georgieva said she is determined to heighten the institution’s awareness of IMF policies’ impact on people and its responsibility to help build a “fair and inclusive” society.

Georgieva also vowed to achieve “gender parity” in the IMF’s senior management: an increase in female representation. She said she believes that when women and men work together, they make better decisions. During her tenure as the World Bank CEO from early 2017 to 2019, Georgieva succeeded in elevating women to occupy 50% of the institution’s senior management positions.

In the interview, Georgieva lauded the U.S.-China phase one trade deal as a “very positive step” and urged that Beijing and Washington make further efforts to achieve a lasting settlement that would deliver a positive impact on the world economy.

After Georgieva took office Oct. 1, the IMF estimated in its most recent World Economic Outlook report that the trade war between the U.S. and China could mean the loss of around $700 billion, or 0.8%, for the global economy by 2020.

The Fund further cut economic growth forecasts for China and the world as a whole, citing trade barriers and geopolitical tensions eroding the potential for economic expansion, according to the report.

Beijing and Washington should pursue talks on issues including intellectual property rights, the service sector and e-commerce, which are vital for the international trading system, she said.

She said it’s key for the two sides to find areas of convergence rather than divergence, such as the notion of tech decoupling, or disconnecting China from U.S. advanced technology.

To facilitate convergence, she said multilateral organizations can play an important role in building opportunities for concerned parties to reach agreements, especially on the issue of technology, which has led to visible and rapid changes and has created new policy issues that need to be addressed.

In the interview, Georgieva said: “Borrowing is not necessarily bad. You borrow to invest in generating future income to make [the host country’s] society better off.”

While borrowing by African nations can help with job creation and economy-building, she also said nations should be transparent about debt, risks and their ability repay. Private and public funders should work together, she said.

“In Africa, two-thirds of debt today is privately funded,” Georgieva said. “That is a huge contrast to just 10 years ago. And if it is not transparent, there would be a huge risk that countries might take on a level of borrowing that they cannot sustain.”

Lenders should contribute to sustainable development and improvement in the lives of people, the IMF chief argued. “Lenders cannot ignore the impact of their loans on the future of economies,” she said.

In 2013, China launched the Belt and Road Initiative, an ambitious infrastructure development and investment plan that stretches from East Asia to Europe.

Beijing has reached and signed 173 agreements with 125 countries and 29 international organizations on cooperation in the initiative, according to a Xinhua news agency summary of in March. Countries in Africa, Latin America and South Pacific have also participated.

In the interview, Georgieva said the IMF “recognizes” that the digitalization of currency has been taking place and “already some large countries are very seriously working on central bank digital currencies.”

“It is hugely important that there is no risk of countries falling behind as a result of these developments,” Georgieva said. “That is where the Fund can play a major role.”

“The currency is not for speculation,” the central banker said. “It is different from bitcoin or stable tokens, which can be used for speculation or require the support of a basket of currencies.” Mu did not comment on Facebook’s Libra cryptocurrency project, which may be launched next year.

Georgieva said the Facebook initiative served as “a wake-up call” to regulatory authorities. The IMF recently recommended that central banks worldwide explore the introduction of synthetic central bank digital currencies (CBDCs). In a blog post this month, the IMF offered to play a significant role in CBDCs, including informing the policy debate, convening policy discussions and helping countries develop policies.

With Facebook’s cryptocurrency ambitions stalled by international regulators’ skepticism over consumer protection and financial sovereignty, the IMF has the potential to play a leading role on the issue.

The pause in the Libra project reflects the lack of an enabling environment because of concerns about sovereignty of monetary policy, Georgieva said in the interview. Regulatory authorities, central banks and finance ministries need to examine the technology and decide what regulatory parameters need to be put in place, she said.

The topic will be further discussed at the IMF’s spring meeting in 2020, focusing on the macroeconomic impact of CBDCs and related issues of sovereignty, the IMF chief said.

The vision of the IMF

When Georgieva was picked to fill the IMF’s top position, she was widely expected to bring more of a human perspective to the organization’s policymaking.

On the wall of her spacious but simply decorated office, a framed sign with the words “End Poverty” hangs prominently next to her desk. When discussing her vision for the IMF, she said it is paramount to understand how policies affect especially “the elderly, the poor, the most vulnerable.” Policies should be designed to build a fair and inclusive society, she said.

Born into a relatively privileged family in Bulgaria in 1953, the daughter of a civil engineer who supervised state road-building projects, she experienced dire financial straits in her adolescence after her father became severely ill. She witnessed the impact on people’s lives of political change in late the 1980s and early 1990s.

In her first speech as head of the IMF, delivered at the 2019 World Bank Group-IMF annual meeting Oct. 18, she told how her mother lost 98% of her life savings to hyperinflation during Bulgaria’s currency crisis of the 1990s.

Georgieva said she personally lived through an adjustment that the IMF supported in her own country that led to Bulgaria becoming more competitive with significantly improved living standards.

She said she believes that there is much more in the world that unites people than divides them and that the more the world can deliver of multilateralism, the better the chances for overcoming divisions.

“It is very important that the Fund is a predictable and reliable anchor in a world economy that is experiencing more turbulence and more uncertainty,” Georgieva said.