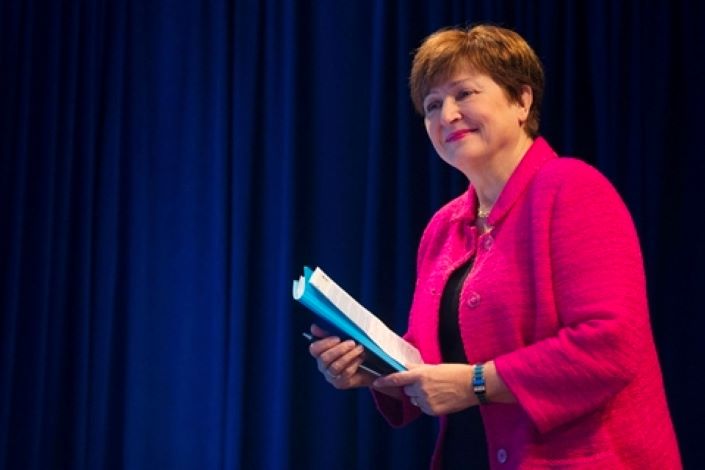 The new head of the International Monetary Fund applauded the phase one trade deal between China and the U.S. as a “very positive step” for both countries and the world economy, and called for continuous discussions on broader policy topics.

In an exclusive interview with Caixin in Washington Monday, IMF Managing Director Kristalina Georgieva said she expects the agreement between the two countries to boost China’s growth to around 6% next year, up from the IMF’s previous estimate of 5.8% made in October. The earlier forecast was made before the U.S. and China agreed on the phase one deal on Friday which effectively pauses their 18-month trade war, rolls back certain tariffs, increases imports of some agriculture products from America, and contains a commitment to structural reforms and other changes to China’s economic and trade system.

Georgieva, took over the helm of the international finance agency on October 1. Later that same month the IMF estimated that the trade war between the U.S. and China could mean the loss of around $700 billion, or 0.8%, for the global economy by 2020.

In her interview with Caixin following the phase one deal, the IMF head said the agreement should lessen the impact of the trade war on the world economy, and of course it would be beneficial for China growth.

But Georgieva also warned that this is just a trade truce. “To sustain the positive impact for the world, we need to go from trade truce to trade peace”.

U.S. President Trump tweeted Friday that the U.S. would begin negotiations on the next phase of the trade deal “immediately, rather than waiting until after the 2020 election.” But this has yet to be confirmed by the Chinese side.

China’s Vice Finance Minister Liao Min said at the press conference Friday that the second stage of negotiations will depend on the implementation of the first phase agreement. The top priority now is to sign and implement the accord, Liao said. As for when follow-up consultations will start, it’s still up to both sides to continue to negotiate, he said.

Similar sentiments were expressed by the U.S. later. In an interview aired Sunday on CBS’s “Face the Nation,” U.S. Trade Representative Robert Lighthizer confirmed that he expects the phase one deal to be formally signed in early January, but said there’s no date set for second stage negotiations. He added that any second phase negotiations is going to be determined by how the phase one agreement is implemented and the phase one agreement needs to be implemented “right down to every detail.”

For the next phase of negotiations, Georgieva suggested the U.S and China should concentrate on broader policy topics that are important to both sides and look at certain aspects of the trading system, such as intellectual property rights, services and e-commerce.