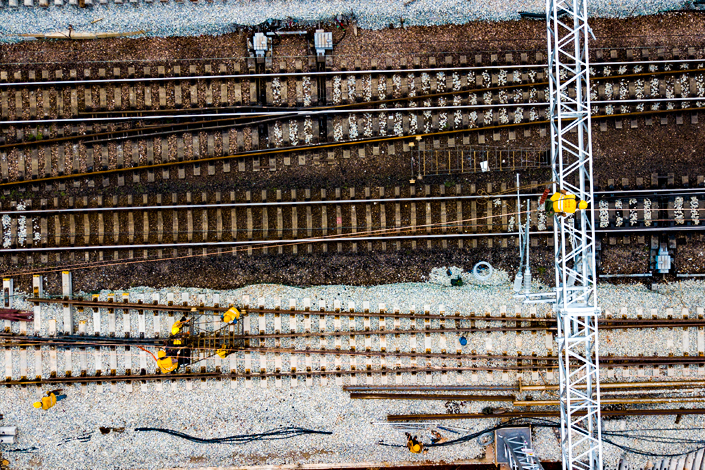 A construction crew works on a section of the Haoji Railway in Xinyu, East China's Jiangxi province, on Sept. 3.

It seemed like a good idea at the time.

When construction of the proposed Haoji Railway came up at a government planning meeting in 2008, the 1,813-kilometer (1,127-mile) freight line, running from Kholbolji in the Inner Mongolia autonomous region to Ji’an, Jiangxi province, offered a way to streamline coal transportation through the middle of the country. The railway was created to haul the fossil fuel from a region in northern China that at the time was home to 69.9% of domestic coal production, according to data from provincial statistics bureaus, to an inland area that didn’t produce much of its own coal.

More than 10 years and 193 billion yuan ($27.55 billion) in the making, the Haoji Railway started running on Sept. 28 to much fanfare, with the state-run China Daily reporting that the project would ensure Central China’s energy security and give an economic boost to localities along the line.

However, the freight volume data from the line’s first month of operations raises the question of whether there will be enough demand to support a railway designed to haul more than 200 million tons of coal a year, or roughly 547,000 tons a day. In its first month, the Haoji Railway transported 35,000 tons a day on average, according to Daqin Railway Co. Ltd., one of its shareholders.

To be fair, the railway’s operator, China State Railway Group Co. Ltd., had set a lower bar. The company aimed to be shipping an annual total of 60 million tons of coal on the line in 2020, the state-run People’s Daily reported, or 30% of total designed capacity. However, since the line opened, the railway’s shipping agent, China Railway Xi’an Group Co. Ltd., has reduced its own freight volume target to 18 million tons a year, according to a source who had seen the company’s internal forecast.

The underwhelming freight demand on the Haoji Railway, hyped as China’s longest of its kind, can be explained in part by the fact that the line is still in the early days of operation. However, changes in the domestic coal freight market and the underlying economic challenges of running such a line call into question whether the railway needed to be built in the first place.

The challenges facing the railway highlight how China’s efforts to shift to cleaner sources of energy have impacted its conventional fossil fuel industry, with mammoth infrastructure projects characterized by years-long lead times looking particularly at risk. Although China’s coal demand has continued to grow, coal’s share of the country’s energy mix fell from 70% in 2011 to 59% in 2018, according to the state-run Economic Daily. More importantly, growth in demand will slow to 0.4% by 2040, the International Energy Administration projected in a January report.

Betting on the boom

Planning of the Haoji Railway dates back to at least 2008, when it came up at a medium-to-long-term railway planning meeting of the National Development and Reform Commission, China’s top economic planning body. At the time, China had only two railway lines devoted to shipping coal, and they both ran from east to west. That left the inland provinces of Hubei, Hunan and Jiangxi hard-up for coal, especially around the Lunar New Year holidays.

Despite the advantages to building the new north-to-south line, there were concerns at the time about the complexity of creating a line that would run through seven different provincial-level railway administrations, some of which might have conflicting interests, according to a source involved in the early planning of the railway. Perhaps more importantly, China was set to embark on a mammoth expansion of its high-speed rail system, which would free up freight capacity on its conventional railway network. “From the very beginning, people thought it was crazy to build such a railway,” the source said.

Nonetheless, policymakers pushed ahead with the planning in 2012. Shareholders of Mengxi-Huazhong Railway Co. Ltd., the company behind the railway, put up 35% of the 193 billion yuan investment, led by China Railway Investment Co. Ltd. and two of the country’s top coal producers, China Shenhua Energy Co. Ltd. and China Coal Energy Co. Ltd., according to a 2014 notice from the NDRC. The rest was borrowed from domestic banks including the China Development Bank, Bank of China Ltd. and China Construction Bank Corp.

The trend can be seen in the freight volumes of the Daqin Railway, the country’s busiest coal freight line. Its shipments in the first 11 months of this year fell 4.15% year-on-year to 376 million tons, according to a report by its operator, Daqin Railway Co. Ltd.

China now has five coal freight railways: the Daqin Railway, the Shuohuang Railway, the Wari Railway, the Mengji Railway and the Haoji Railway. Together, they transport about 1.3 billion tons of coal a year, according to Caixin calculations based on public data.

How much coal the Haoji Railway can ultimately transport will hinge on demand along the line, according to a report by Daqin Railway, which has a stake in the Haoji line.

“There is still room for coal demand and transportation to grow in Jiangxi, Hunan and Hubei province, but it could narrow if demand peaks,” said Yin Zhen, associate director of the NDRC’s Institute of Comprehensive Transportation.

Before the Haoji Railway, most of the coal produced in northern China made its way to the southern and central parts of the country first by train to the Bohai Bay in the northeast, then by ship down the coast, before being transported inland. Despite the Haoji line’s advantage of being able to haul coal almost right to the gate of inland power plants, it’s still cheaper to transport it by sea, according to people engaged in the line’s early preparation. For the line’s customers, the shorter the rail journey, the more of their profit they hold on to. That doesn’t bode well for a coal freight railway billed as China’s longest. The situation has undercut the Haoji Railway’s competitive advantage.

And that’s not Haoji Railway’s only pricing problem. The line’s base rate is 0.184 yuan per ton of coal, more than 22% higher than the average price of 0.15 yuan per ton for the national freight railway. That further squeezes the profit of its customers.

“There is no profit in transporting coal to southern China,” said Li Shaochun, who is involved in the coal shipping business of Shaanxi Coal and Chemical Industry Group, the Haoji Railway’s second-largest shareholder. “Freight costs take up 60% of a shipper’s revenue. Margins are so tight that there is no difference between shipping the coal down the line and selling it locally. Under these conditions, coal companies usually prefer to sell to local traders and consumers.”

Cutting freight prices would make the Haoji line more competitive, but analysts don’t think that’s likely to happen. The government keeps a tight grip on the market and hasn’t issued any policy suggesting it would consider cutting prices. Four of the country’s five coal freight lines are run by units of China State Railway Group. One coal analyst said that the situation might improve if railway administrators could agree to allocate the Haoji Railway some of the coal that had been earmarked to other lines.

Another problem plaguing the Haoji Railway is facilities for loading and unloading coal from the trains, some industry insiders have pointed out. There were plans to build 81 such facilities along the line. However, only 24% of the facilities had been completed by the time the trains started running — dampening the railway’s freight volume. Some market participants believe that the need to finish these facilities is another reason authorities will be reluctant to lower the prices on the line anytime soon.

Much of the demand for the railway has so far come from a single stakeholder.

Shaanxi Coal and Chemical, which holds a 12.5% stake in the Haoji Railway, had shipped 700,000 tons of coal on the line by the end of October, accounting for over 90% of the line’s total freight volume. The company aims to supply at least 12 million tons of coal by 2022 along the line to Hunan province in a bid to open up the coal market in central China.

However, other stakeholders are less optimistic about the railway’s prospects. Three of its other shareholders — China Coal Energy Co. Ltd., Inner Mongolia Yitai Coal Co. Ltd. and Inner Mongolia Mengtai Group Co. Ltd. — didn’t follow through with their initial investment pledges, and reducing their stakes in the railway from 10% to 2.3%, 10% to 2%, and 2% to 0.05%, respectively, according to interim audit of Mengxi-Huazhong Railway that was released in September.

“The poor performance of coal in recent years left us with losses, so we gave up a portion of our stake,” one industry insider told Caixin.