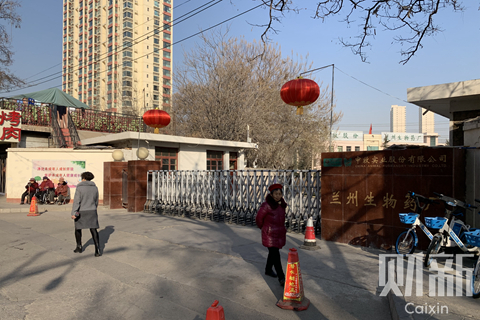 Fears of an outbreak of highly contagious and hard-to-treat brucellosis drained the cheer out of New Year celebrations for residents of neighborhoods around a biopharmaceutical plant in northwest China’s Lanzhou city, Caixin learned.

As of 9 a.m. Wednesday morning, queues stretched tens of meters outside a lab of the Lanzhou No. 2 People’s Hospital as people waited for blood tests for the bacterial disease. The Lanzhou Biopharmaceutical Plant is on the northeast periphery of Lanzhou, the capital of Gansu province.

“(We are) very worried about the results and have no mood for the holiday,” a person in the queue giving only the surname Wu told Caixin.

Wu said his community is less than 100 meter away from the front door of the factory. A notice was posted on the community’s gate Dec. 27 advising residents to go for free brucellosis testing in designated hospitals and clinics in the city until Jan. 4, Wu said. Results of the tests are expected in one week, doctors at the hospital said.

Dozens of students and researchers at a veterinary research institute in Lanzhou tested positive for antibodies to the Brucella bacterium in early December, sparking fears of a brucellosis outbreak.

Brucellosis is an infectious, animal-borne bacterial disease commonly seen among sheep, cattle, goats, pigs and dogs. Humans can also contract the disease through close contact with infected animal tissue or through ingestion of unpasteurized dairy products from infected animals.

The disease, also known as Malta Fever or Mediterranean Fever, can cause recurring fevers, joint pain and severe headaches, among other symptoms. Chronic brucellosis is especially hard to cure and causes a general lack of energy and a persistent feverish state. Symptoms can last months or even years and cause damage to human fertility, although the disease is rarely deadly.

The Gansu provincial public health authority confirmed Dec. 26 at a press briefing (link in Chinese) that 181 of 671 blood samples tested positive for brucellosis antibodies among staff members and students at the Lanzhou Veterinary Research Institute, an affiliate of the Chinese Academy of Agricultural Sciences, since late November. One person showed clinical symptoms.

Brucellosis spread in China in the 1970s and 1980s but has been effectively controlled. The country’s Law on the Prevention and Control of Infectious Diseases lists the brucellosis as a class II infectious disease along with AIDs and SARS.

Investigations found that the spread of the disease was caused by contaminated factory exhaust. Lanzhou Biopharmaceutical Plant, a unit of China Animal Husbandry, used expired sanitizers while producing Brucella vaccines between July 24 and Aug. 20, according to the Gansu Provincial Health Commission at the Dec. 26 briefing. Officials of the factory haven’t commented.

Failed disinfections resulted in the bacteria entering the factory’s exhaust. This infected people working at the nearby Lanzhou Veterinary Research Institute, which was downwind from the factory, the authority said. Production at the plant was halted Dec. 7.

Without explaining the possible risks to nearby residents, officials said at the briefing that antibody tests will be carried out for residents of nearby areas. Public information showed that there are eight residential communities with a combined population of more than 10,000 located within 500 meters of the Lanzhou Biopharmaceutical Plant.

The Lanzhou No. 2 hospital is among 11 medical institutions designated to offer free antibody tests for brucellosis infection. The hospital tested 1,274 samples between Dec. 28 and Jan. 1.

On Jan. 1 alone, the 11 institutions received a total of about 1,000 people for testing, Caixin learned.

Among people who received results for tests between Dec. 28 and 30, more than 10 read positive for antibodies at different degrees, Caixin found. One female surnamed Hua with a high-degree positive result said she has shown symptoms of fatigue and pain.

Hua said her blood sample was sent to the Lanzhou Disease Prevention and Control Center for further analysis.

An official at the Disease Prevention and Control Center said antibody-positive results don’t necessarily mean infection, and there is no need for medical treatment if no symptoms are evident.