China’s Pneumonia Outbreak Widens to 59 Amid Hunt for Source 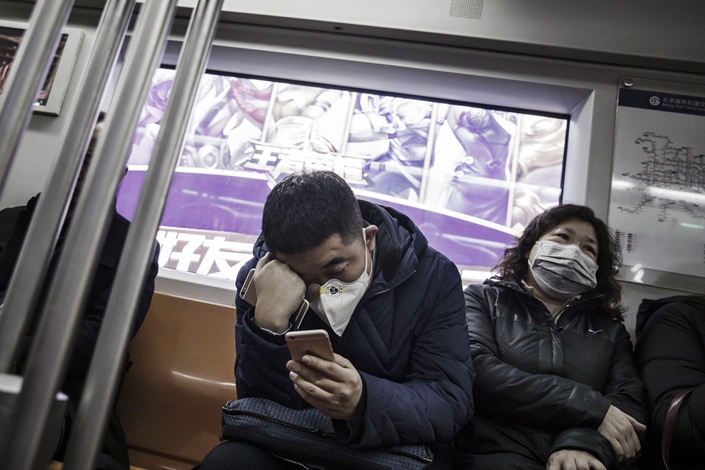 (Bloomberg) — A pneumonia outbreak in China that’s infected 15 more people doesn’t appear to be spreading from human to human, officials said, after ruling out SARS as a potential cause of the mysterious disease.

As of Sunday morning, 59 people had been diagnosed with pneumonia, the cause of which is unknown, the Wuhan Municipal Health Commission said in a statement late Sunday. That’s up from 44 on Friday. Seven people are in serious condition. Investigations found some patients are business operators at a seafood market in the central Chinese city.

“As of now, preliminary investigations have shown no clear evidence of human-to-human transmission and no medical staff infections,” the commission said in the statement in Chinese. Reported symptoms are mainly fever, while some have had shortness of breath.

Cases involving health-care workers would be a worrying sign that the infectious agent is capable of spreading between people, potentially touching off an epidemic like the outbreak of Severe Acute Respiratory Syndrome, or SARS, that killed almost 800 people about 17 years ago.

Respiratory pathogens such as influenza, avian influenza, adenovirus, SARS and the Middle East Respiratory Syndrome coronavirus, or MERS-cov, have been excluded, authorities in Wuhan said. Pathogen identification is still under way, they said.

“The reporting patterns for both SARS and MERS involved high severity illness among health care workers, particularly in the intensive care units,” said James M. Wilson, a pediatrician who has helped monitor health security threats for 25 years. “That is a critical, priority indicator that we are not seeing in this case — a reassuring sign.”

Among the 59 patients, the first developed symptoms on Dec. 12 and the latest on Dec. 29. Some 163 people who have been in close contact with cases have been followed up for medical observation, the commission said.

The situation is being monitored by the World Health Organization, which said it’s in active communication with its counterparts in China.

The United Nations agency activated its incident-management system at the country, regional and global level and is standing ready to launch a broader response if it’s needed, the WHO’s regional office in Manila said in Twitter posts Saturday.

Authorities in Hong Kong, Taiwan and Singapore increased precautions at airports to prevent any possible spread of the infections.

Hong Kong’s Centre for Health Protection said its enhanced surveillance system picked up 16 sick people who had recently traveled to Wuhan. Most of them tested positive for flu. Six had no positive lab results. Authorities have found no discernible link between these cases and the pneumonia cluster in Wuhan.

A 3-year-old girl with a history of travel to Wuhan who was hospitalized in Singapore with pneumonia turned out to have Respiratory Syncytial Virus, a common cause of childhood pneumonia, and isn’t linked to the pneumonia cases in Wuhan, the city’s Ministry of Health said Monday.

The Wuhan seafood market, which has since been closed, also sold birds, pheasants, and snakes, along with organs of rabbits and other wildlife, the University of Minnesota’s Center for Infectious Disease Research and Policy said Friday, citing media reports.

That’s triggered concern about the potential jump of an unknown virus to humans —reminiscent of SARS, which was subsequently identified as a coronavirus.

Since then, scientists have discovered other novel coronaviruses, including MERS-CoV, which are now “readily recognized as routine causes of severe respiratory illness,” said Wilson, a former chief of operations with the Department of Homeland Security’s National Biosurveillance Integration Center. “This increased awareness is thanks to SARS, MERS, and dramatically improved access to diagnostics,” he said.

It’s not known whether a SARS-like “coronavirus” has been identified in the Wuhan cluster, although there have been “numerous unsubstantiated reports mentioning a novel coronavirus that is SARS-like,” the International Society for Infectious Diseases’ ProMED-mail program, an internet service to identify unusual health events, said in an email Friday.

“If test results indicate there is novel respiratory pathogen involved, then China should be commended for rapid detection and response — the epitome of what is supposed to happen,” Wilson said.

Meanwhile, Hong Kong public hospitals admitted seven more people with flu-like symptoms who had recently traveled to Wuhan, bringing the total number of reported cases in the city to 15 since the end of last month.

The patients, aged between two and 55, all visited Wuhan in the past 14 days and display fever, respiratory infection or pneumonia symptoms, the Hospital Authority said in a statement Sunday. All are being kept in isolation, according to the statement.

The government on Saturday classified its response level to the outbreak as “serious” — the second-highest scale of action in its three-tier system, with the top being emergency, according to a statement from the Department of Health. The current classification estimates the immediate health impact on the local population to be moderate.

None of the latest seven people hospitalized in Hong Kong had visited a wet market in Wuhan, according to the Hospital Authority’s statement.