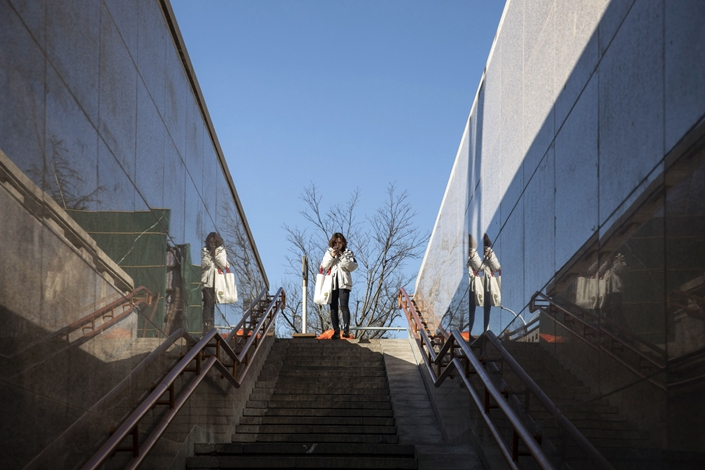 A woman looks at her phone while entering a pedestrian underpass in Beijing on Feb. 15. Photo: Bloomberg

The tax cuts were worth more than 2% of gross domestic product, according to a statement from the tax authority on Monday. That means that the nominal value of the economy likely grew to about 100 trillion yuan at the end of 2019, according to Bloomberg calculations, up from 92 trillion in 2018.

The data confirms President Xi Jinping’s statement on New Year’s Eve that GDP was “expected to be close to 100 trillion yuan” in 2019. The tax agency didn’t provide a detailed breakdown of revenues or how it calculated the GDP contribution.

Revenue growth fell due to the cuts, including a reduction in value-added tax rates and an increase in the amount households could deduct from their income. That decision, touted as the most aggressive tax cut ever by policymakers, aimed to boost investment and consumption.

Tax revenue contracted in the first nine months of 2019 compared to the same period in 2018, but resumed growth in October due to a low base comparison, the Ministry of Finance said in a November statement. Tax revenue in the first 11 months grew 0.5% on year, according to a separate MOF statement last month.

There’s a slight difference in the total tax revenue figures reported by the Ministry of Finance and the State Taxation Administration, but it’s not clear why the two differ.

The Ministry of Finance is expected to publish a full-year income report later this month that also includes nontax revenues such as profits by state companies that are turned over to the national treasury.