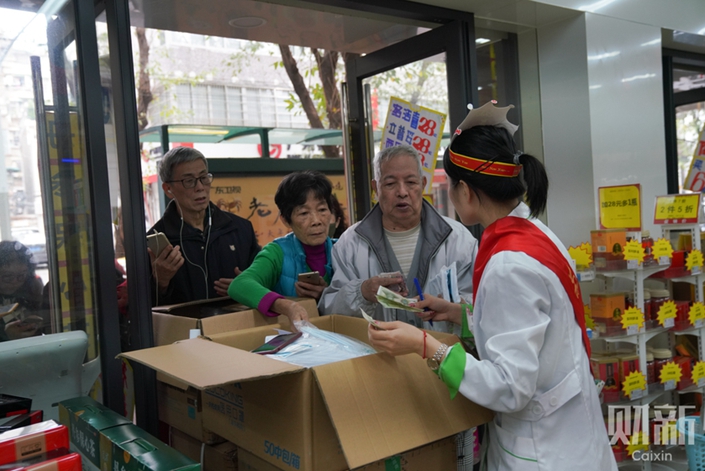 The outbreak of viral pneumonia that’s spreading across China has raised concerns that the world’s second-largest economy could take a hit as consumer confidence slumps, hurting retail sales and spending on travel, leisure and entertainment.

Share prices of Chinese airlines, travel and restaurant companies dropped sharply this week after the government confirmed that the disease, thought to be caused by a previously unknown type of coronavirus, can be transmitted between humans and significantly raised the number of known cases and deaths. Now, economists are warning that consumption could suffer and dent economic growth in the first and second quarters of the year and prompt further policy easing by the government.

“If the pneumonia couldn’t be contained in the short term, we expect China’s retail sales, tourism, hotel and catering, travel activities likely to be hit, especially in Q1 and early Q2,” UBS AG economists Zhang Ning and Wang Tao wrote in a Wednesday report. “Our forecast of a sequential growth rebound in Q1 and Q2 2020 would face some downside risk. The government would likely strengthen its policy easing to offset the shock from the pneumonia, especially for those directly affected sectors, which could help support related activity rebound in later quarters.”

Since December, health authorities have been grappling to contain the mysterious lung disease that has been compared with the severe acute respiratory syndrome (SARS) pandemic that killed more than 700 people worldwide in 2002 and 2003. The new SARS-like virus, which has been given the name 2019-nCoV, is thought to be a previously unknown type of coronavirus that may have first spread to humans from animals at a now-shuttered seafood market in the central Chinese city of Wuhan, where most of the cases have been diagnosed.

As of Wednesday noon Beijing time, nine people had died and the number of confirmed coronavirus cases on the Chinese mainland had climbed to 339, the State Council Information Office said. A total of 1,394 people are under medical observation. Cases have been reported in Chongqing, Shanghai and Macau, and the disease has now spread overseas, with infected people found in the U.S., Japan, South Korea and Thailand.

In 2002 and 2003, the SARS outbreak, which started in Guangdong province, infected thousands of people in China and Hong Kong, eventually spreading to 37 countries and territories. More than 8,000 people contracted the virus and 774 died, mostly on the mainland. Chinese authorities initially covered up the extent of the SARS outbreak, but a change in official policy led to greater transparency and the involvement of the World Health Organization. As part of its strategy to prevent the disease from spreading and bring it under control, the Chinese government imposed strict quarantines and travel bans.

The economic impact of the new coronavirus could follow the same trajectory as the SARS epidemic, analysts at Nomura International (Hong Kong) Ltd. wrote in a note on Tuesday. SARS first emerged in November 2002, worsened dramatically between March and May 2003, and was finally contained in June and July 2003. Year-on-year gross domestic product (GDP) growth dropped from 11.1% in the first quarter to 9.1% in the second quarter, dragged down mostly by two main subcomponents — transport, storage and postal services; and hotel and catering services — Nomura said. But the adverse impact of SARs on industrial production, the property sector, exports and fixed-asset investment was less severe.

Analysts at UBS noted that in 2003 the government provided targeted fiscal policy support for affected sectors, such as waiving some fees for tourism, transport, hotel and catering sectors. Monetary and credit policy became even more accommodative, with M2 growth rising further from 18.5% in March 2003 to above 20% in May and 21.7% in August 2003.

“The economic impact this time around will obviously depend on how far the virus spreads, how many people it kills and the response of the authorities,” analysts at London-based research firm Capital Economics wrote in a report Tuesday. “[B]ut there are a couple of reasons for optimism. While it is still early days, the current virus does not appear to be as deadly as SARS, which had a fatality rate of nearly 10%.

“What’s more, while the authorities in China were initially slow to respond, in the past couple of days they have become much more open about the spread of the virus and proactive in trying to contain it,” the analysts wrote.

But Nomura’s economists warned that as the annual weeklong Lunar New Year holiday — which this year starts on Friday — approaches, the current mortality rate could be underestimated given the early stages of the development of the pneumonia and the lack of an effective vaccine. This could bring increased downward pressure on China’s growth, particularly in the services sector, in the short term.

But referring back to the SARS epidemic, they and analysts at China International Capital Corp. Ltd. noted that once the disease was brought under control, economic activity rebounded quickly and GDP growth recovered to 10% in the third quarter.