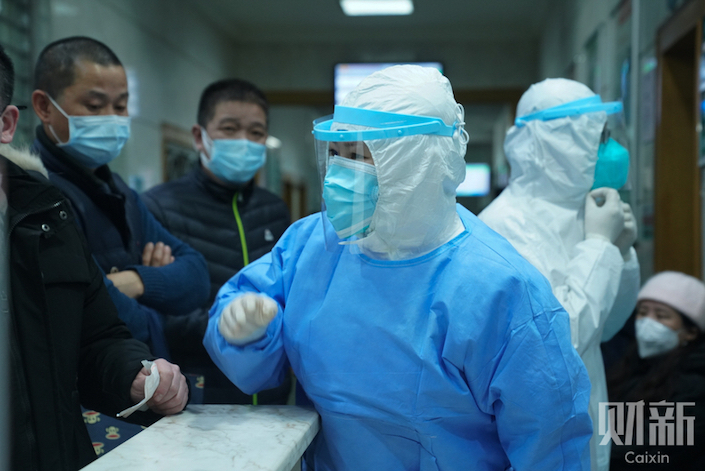 It’s New Year’s Eve. But there is nothing celebratory in the hospitals of Wuhan. It is a war zone, with no truce in sight.

At 7 in the morning, medical workers start the day wearing full protective gear and goggles. For hours they treat suspected viral pneumonia patients in their surgical gowns — no time for eating, drinking water or going to the bathroom, and sweating heavily inside the safety suits.

A nurse tells me her mother is having heart surgery in another hospital. She is swamped with patients and can make only a brief call during her lunch break to get surgery updates from relatives.

The lack of hands is not the only problem. Many hospitals in Wuhan have issued public announcements calling for donations of critical medical resources, including goggles, surgical masks, surgical hats, surgical gowns and protective masks.

The war against the new coronavirus is expanding quickly. As of 4 p.m. Jan. 24, there are nearly 900 confirmed cases with 26 deaths. Hubei province alone has 549 confirmed cases and 24 deaths. The real number of infections could be much higher, as thousands of suspected cases are waiting to be tested.

The virus spread quickly across the country. In addition to Hubei province, 15 other provinces and provincial level municipalities, out of the total of 34 in China, have announced highest-level emergency response measures to the coronavirus.

Wuhan, where the virus was first reported, is building a quarantine center in a suburb. Construction has started and is expected to be finished by Feb. 3.

As the city locks down, shortages of medical staff and critical resources start to emerge. Testing kits are in constant shortage, and many hospitals are running out of beds for critically ill patients. In a few hospitals, simply because of the lack of testing kits, there have been pneumonia-related deaths that are highly suspected to be linked to the coronavirus but can’t be counted as confirmed infections.

A man surnamed Wu tells me about his father, who suffered a severe infection of the lungs. The symptoms and CT scan highly suggested coronavirus. Wu asked the Wuhan Red Cross Hospital to conduct a virus test for his father, but the answer was that the hospital simply doesn’t have any diagnostic testing kits.

“If no testing, there is no confirmation, then the patient is not allowed to be hospitalized, and there is no hope to have any testing in the future,” Wu says. “There are many people like my father at this outpatient clinic.”

Jiang Chaoliang, the Hubei Communist Party chief, said publicly today that the city will accept all suspected cases and put them in effective quarantine. Medical professionals from outside Wuhan start flying into the city today. Guangdong province sent 135 people, and there are similar teams coming from Shanghai and elsewhere.

As the Year of the Rat begins, Wuhan and millions of its residents are anxiously waiting and wondering: When will there be enough hospital beds and medical supplies to care for them?