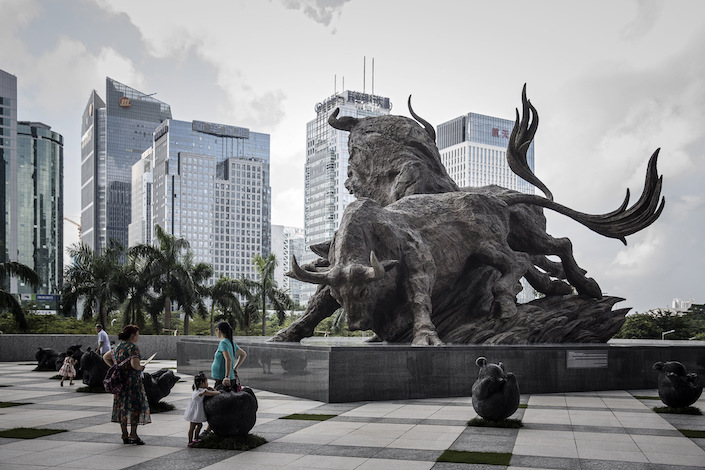 People stand in front of a sculpture of bulls at the entrance to the Shenzhen Stock Exchange building in Shenzhen. Photo: Bloomberg
China’s stock markets will remain closed until next Monday as the country fights to halt the spread of the viral pneumonia that has claimed more than 80 lives domestically while proliferating abroad.

In separate statements (link in Chinese) Monday, the Shenzhen and Shanghai stock exchanges said trading is now scheduled to resume Feb. 3. Both markets have been closed since Jan. 24 for the Lunar New Year holiday and were originally set to reopen Jan. 31.

Resumption of trading for the stock connect programs, which link the mainland markets with the Hong Kong bourse, will also be postponed until Feb. 3, according to the statements. Hong Kong’s financial markets are due to reopen Jan 29.

Listed companies, which are supposed to publish their 2019 earnings estimates by Jan. 31, can delay the reports until Feb. 3, the bourses said. Bond transactions scheduled for Jan. 31 and Feb. 3 will also be postponed until after the market resumption.

Earlier Monday, the State Council, the cabinet, said the seven-day Lunar New Year holiday will be extended to Feb. 2, three days longer than initially planned. It also instructed kindergartens, schools and universities to postpone reopening to limit the spread of the virus.

The deadly disease, caused by a new strain of coronavirus, has sickened 2,840 people in China and killed 81 as of late Monday, forcing a number of cities to impose travel bans. It has spread to 12 countries outside China with more than 80 cases of infection confirmed.

Fears of wider contagion mounted as Zhou Xianwang, the mayor of Wuhan — the epicenter of the outbreak — said Sunday that more than 5 million people left the city before it was locked down Jan. 23. Zhou offered his resignation Monday over his handling of the crisis.

While the domestic markets are closed, investors abroad have been shaken by fears of the viral disease and its effects on China’s already slowing economic growth. Chinese companies listed in the Unites States have widely suffered a slump over the past few days, led by travel and consumer services providers.

The Chinese government ordered travel agencies to suspend all tour groups and sales of trip packages to reduce contagion risks. Customers are allowed to obtain refunds for advance purchases.

E-commerce giants have also been affected. Alibaba Group dropped over 3.8% Monday while archrival JD.com closed down 4.8%.

Futures on the FTSE China A50 Index sank as much as 5.9% in Singapore Monday and extended the declines in after-hours trading. The offshore yuan fell 0.8%, trading more weakly than its 50-day and 200-day moving averages, according to Bloomberg.