By Sun Huixia and Flynn Murphy 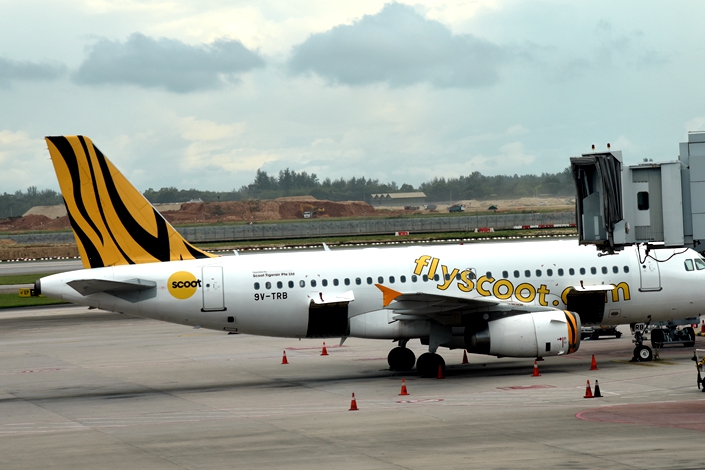 Singaporean budget airline Scoot announced Monday that it would offer two one-way flights to bring Chinese travelers stranded in Singapore to Wuhan. Photo: IC Photo
As the number of cases of coronavirus continues to rise both in and outside of China, travelers from Wuhan are facing a tough journey home as airlines cancel their flights into the city at the epicenter of the outbreak.

The bureau didn’t reveal where the Wuhan tourists currently are, but the most popular destinations between Dec. 30 and Jan. 20 were Japan, Thailand and Singapore, according to International Air Transport Association data on flights leaving the city.

Singaporean budget airline Scoot suspended its daily flights between Singapore and Wuhan, capital of Central China’s Hubei province, on Jan. 23. Prior to this, the subsidiary of Singapore Airlines operated two flights daily between the cities, each with a capacity of around 300 passengers.

However, the airline on Monday announced that it would offer two one-way flights on Wednesday and Thursday to bring Chinese travelers stranded in Singapore to Wuhan.

On Jan. 23, Wuhan imposed a massive quarantine in a step to halt the spread of the coronavirus that first appeared there. All bus, subway, ferry and long-distance bus systems in the city of 11 million people were suspended, and authorities asked residents to remain in the city.

On Wednesday, U.K. flag carrier British Airways suspended all flights to and from the Chinese mainland, citing advice from the British Foreign Office about the dangers of the virus.

“We apologise to customers for the inconvenience, but the safety of our customers and crew is always our priority,” the airline said in a statement.

StrategicAero Research Chief Analyst Saj Ahmad said he expected to see “every major blue-chip carrier you can think of re-evaluating their China operations … given the inability thus far of China's health authorities to rein in the spread of the coronavirus.”

"I think the next day or two will be critical. If more cases are uncovered, then I am sure airlines will de-risk their exposure and start axing flights for an indeterminate amount of time.”

On Tuesday, U.S.-based United Airlines announced the suspension of dozens of flights to Wuhan and three other Chinese cities between Feb. 1 and Feb. 8, citing reduced travel demand.

The same day, executives from several major U.S. carriers were told by the White House that a temporary ban on China-bound flights is on the table, according to CNBC.

The U.K. and United States have been monitoring flights arriving from China as a precaution to contain the fast-spreading virus.

Flights between Hong Kong and the mainland will be reduced by half and high-speed trains, tour buses and ferries between the two regions will be suspended from Thursday onwards, Hong Kong Chief Executive Carrie Lam said Tuesday.

Macao advised visitors holding passports issued in Wuhan to leave voluntarily if they do not exhibit any signs of an infection.

From Monday, visitors to Macao holding Chinese passports issued in Hubei and those with non-Macao-issued travel documents who visited Hubei within the last 14 days have been told to produce a doctor’s note showing they are not infected with coronavirus. Any visitor with a history of travel to Hubei within the last 14 days is barred from entering the region’s casinos.

As the number of confirmed infections in Taiwan rose to three, all mainland tour groups were ordered last Saturday to leave by the end of the month.