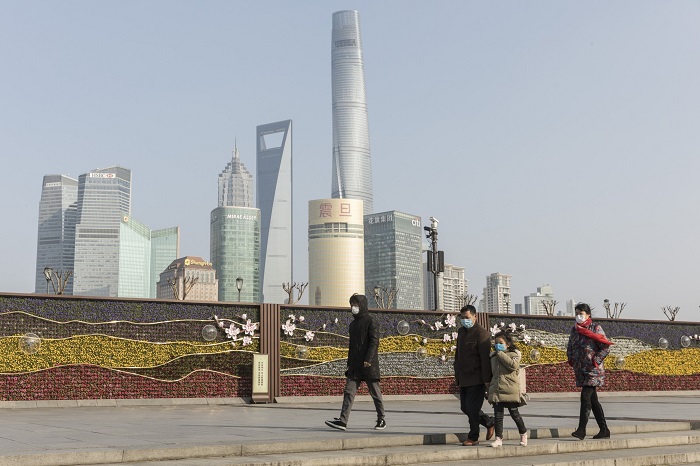 Pedestrians walk on a road near the Bund in Shanghai. Photo: Bloomberg

Chinese financial markets opened weakly on Monday, the first trading day after an extended Lunar New Year holiday, as stocks, commodities and the yuan all lost ground on concerns about the economic impact of a new coronavirus outbreak.

The benchmark Shanghai Composite Index dropped nearly 9% when trading resumed after a Lunar New Year pause that saw markets last trade on Jan. 23. It came back slightly during the trading day to close down 7.7%. The Shenzhen Component Index closed down 8.5%.

“It is really hard to trade stocks,” said Li Shuwei, chairman at Beijing WanDeFu Investment Management Co. “It’s impossible to predict how this disease will develop. Even the experts have no clear idea when the outbreak will end, let alone stock traders. It’s too early to buy stocks right now and it’s also difficult to sell as all shares are limit down. So I will just have to wait and see.”

The outbreak of a new coronavirus that first appeared in the central Chinese city of Wuhan accelerated over the holiday period, leading to a one-day delay in the reopening of stock markets in Shanghai and Shenzhen that was originally set for Friday last week. That outbreak has seen more 17,000 people diagnosed with the disease in China, with 361 dead, according to the latest statistics.

Read more
In Depth: How Wuhan Lost the Fight to Contain the Coronavirus

Other financial markets also saw sharp weakness. The country’s three major commodity exchanges were hit by a wave of selling, with China’s benchmark iron ore contract falling by its daily limit of 8%. Copper, crude and palm oil also sank by the maximum allowed. Meantime, China’s currency, the yuan or renminbi, fell past the key 7-per-dollar level.

The weakness came even as the central bank took steps to try and ease the selling pressures. The central bank said on Saturday it would inject sufficient liquidity to financial markets after they reopened through monetary policy tools such as open market operations, standing lending facility, relending and rediscount.

Pan Gongsheng, a deputy governor of the People’s Bank of China (PBOC), said in an interview that the central bank would offer 300 billion yuan ($43.3 billion) in low-cost funds to major national and local banks in Central China’s Hubei province, where the outbreak is centered, for them to provide low-interest loans to enterprises that produce urgently needed medical supplies and daily necessities.

Authorities have also instructed lenders to rollover the loans of enterprises that get hit hard by the outbreak and have trouble repaying their debts on time. In another move aimed at stemming selling pressure, China’s securities regulator also instructed brokerages (link in Chinese) to temporarily halt most short selling, Caixin has learned.

Wang Tao, an economist at UBS, said it is difficult to quantify the outbreak’s economic impact, but forecast it could shave more than 2 percentage points off China’s first quarter economic growth.

“Assuming that the outbreak will be controlled in the first quarter with few new cases thereafter, we estimate that first quarter GDP growth will drop to 3.8% year-on-year, while subsequent normalization of activities, release of pent-up demand and policy support should see growth rebounding in the second to fourth quarters,” she wrote. “With this assumption, we downgrade China's 2020 GDP growth forecast to 5.4%.”