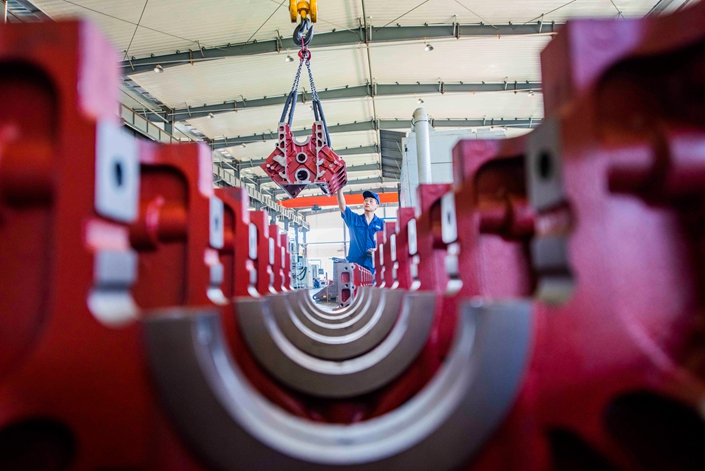 A worker is seen on the shop floor of an engine-maker in Weifang, in East China's Shandong province. Photo: IC Photo

Activity in China’s manufacturing sector expanded in January at the slowest pace since August as growth in output, new orders and employment all softened, a Caixin-sponsored survey showed Monday.

The Caixin China General Manufacturing Purchasing Managers’ Index (PMI), which gives an independent snapshot of operating conditions in the manufacturing sector, fell to 51.1 in January from 51.5 in the previous month, the weakest reading in five months. A number above 50 indicates an expansion in activity, while a reading below that signals a contraction.

The Caixin PMI is one of the earliest available monthly indicators of conditions in China’s vast industrial sector and is closely watched by investors. Manufacturing accounted for about 27% of China’s GDP in 2019, government data (link in Chinese) show.

“China’s manufacturing economy recovered at a slower pace at the start of the year,” said Zhong Zhengsheng, director of macroeconomic analysis with consultancy CEBM Group Ltd., a subsidiary of Caixin Insight Group. “Although corporate confidence was boosted by the trade deal, some manufacturers did not replenish stocks despite the pickup in production, due to limited improvement in domestic and foreign demand.”

“In the near term, China’s economy will also be impacted by the new pneumonia epidemic, and therefore need to gain support from proper countercyclical policies,” said Zhong.

In the PMI, the subindex for new orders dropped for the third straight month in January after reaching an almost seven-year high in October, while the gauge of new export orders fell into contractionary territory, ending three straight months of expansion.

Production growth slowed, with the output subindex posting its lowest reading since August. The employment subindex fell for the first time in three months into negative territory. “Some firms implemented down-sizing policies as part of attempts to reduce costs, which contributed to a renewed fall in employment,” according to the survey.

The gauge for future output expectations, which measures how optimistic or pessimistic manufacturers are about their production over the next 12 months, rose in January to the highest point since March 2018, as business confidence continued to improve “due chiefly to the phase one trade deal between China and the U.S.,” said Zhong.

China’s official manufacturing PMI, released by the National Bureau of Statistics on Friday, fell to 50 (link in Chinese) in January, down from December’s reading of 50.2.

The official PMI polls a larger proportion of big companies and state-owned enterprises than the Caixin PMI, which is sponsored by Caixin and compiled by London-based data analytics firm IHS Markit Ltd.