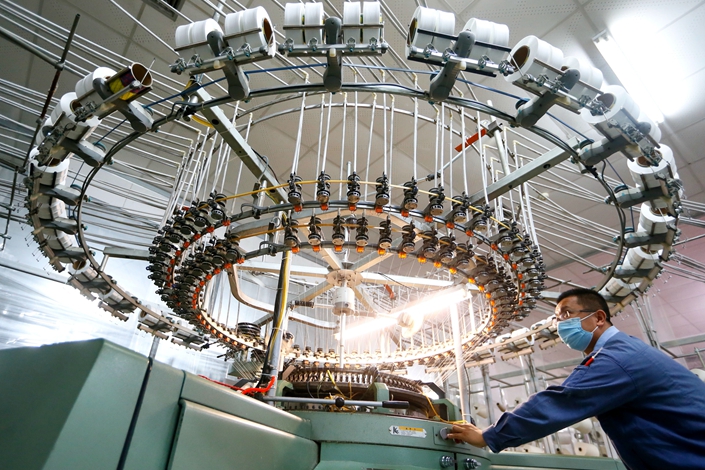 The Caixin China General Manufacturing Purchasing Managers’ Index (PMI), which gives an independent snapshot of operating conditions in the manufacturing sector, fell to 51.5 in December from 51.8 the previous month, the weakest reading in three months. A number above 50 indicates an expansion in activity, while a reading below that signals a contraction.

The Caixin PMI is one of the earliest available monthly indicators of conditions in China’s vast industrial sector and is closely watched by investors. Manufacturing accounted for nearly 30% of China’s gross domestic product (GDP) in the first nine months of 2019, government data (link in Chinese) show.

The weakening of the PMI underscores the challenge facing policymakers in preventing a further slowdown in growth in 2020 after months of mild fiscal and monetary stimulus failed to fuel domestic demand. China’s economy grew 6.2% in the first three quarters of 2019, down from 6.7% in the same period the previous year, amid sluggish domestic and global demand exacerbated by the ongoing trade war with the U.S. The government is due to release full year 2019 GDP data on Jan. 17 and some economists are forecasting a further slowdown to 6.1%, which would be the weakest growth since 1990.

China’s leaders reiterated their commitment to ensuring stable growth and preventing financial risks at the Central Economic Work Conference in December, suggesting there will be no major stimulus in 2020. But many analysts are expecting further monetary and fiscal easing after Premier Li Keqiang said on Dec. 23 that further cuts to banks’ reserve requirement ratio (RRR) would be made, along with other measures to reduce borrowing costs for smaller companies who often struggle to get loans and face higher interest rates than large state-owned enterprises.

On Wednesday, the People’s Bank of China announced a RRR cut of 50 basis points, which will take effect on Jan. 6 and release about 800 billion yuan ($115 billion) of liquidity into the financial system.

In the PMI, the subindex for new orders dropped for the second straight month in December after reaching an almost seven-year high in October, while the gauge of export orders edged down although it remained above 50. The output subindex edged down for the second month, despite remaining at a relatively high level while the measure of employment fell to barely above contraction.

Input costs expanded at a faster pace in December than the previous month, although the growth rate was still softer than the historical average. But the higher raw material prices and staffing costs prompted producers to raise selling prices in December for the first time since June, according to the survey.

The gauge for stocks of finished goods returned to expansionary territory after contracting for two straight months, an improvement some companies attributed to expectations that demand will improve in the coming months, according to the survey.

The index of future output expectations posted a strong increase in December, suggesting manufacturers are more optimistic about the outlook over the next few months. But the reading was still weaker than its historical trend as companies expressed concern over ongoing trade tensions, environmental protection policies and intense market competition, according to the survey.

“Subdued business confidence was a major factor behind the economic slowdown” in 2019, Zhong said. “As the phase one trade deal between China and the U.S. has sent out positive signals, there is room for a recovery in business confidence, which should be able to help stabilize the economy.”

In December, the world’s two largest economies reached an agreement on phase one of a deal that aims to resolve their damaging trade war. Following the announcement of the truce, which includes the U.S. rolling back punitive tariffs on imports from China, some economists raised their forecasts for economic growth in 2020.