Chinese Cities Eerily Empty Even as Country Returns to Work 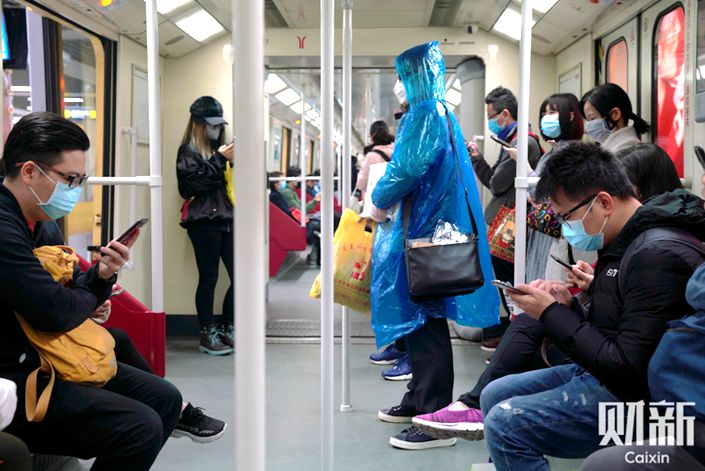 After China’s deadly coronavirus outbreak prompted the government to extend the Lunar New Year national holiday, many people in the country officially returned to work Monday — but it was far from business as usual.

The eerie scenes illustrated that life in China remains far from a return to normality as authorities strive to contain the epidemic, which as of Sunday night was confirmed to have infected more than 40,000 people in China and killed 909, according to official figures.

During what is normally the morning rush hour, almost-empty trains ferried a handful of passengers along Beijing’s subway system. On quiet streets largely bereft of vehicles, a few commuters hurried past red banners exhorting them to be vigilant against possible signs of the virus.

“When entering public areas, please remember to put on a face mask,” one of them read.

In Sanlitun, a major Beijing retail and office area that usually throngs with people, there were few signs of life. “A few more people have come today because they have to go back to work,” a security guard told Caixin Global. “But they haven’t got many customers.”

The capital’s flagship Apple store remained closed until further notice for “health precautions,” according to an announcement hastily pasted to its glass door. The U.S. tech giant has followed other major retailers like IKEA, Starbucks and Muji in temporarily shutting stores on the Chinese mainland.

Staff at clothing retailers Uniqlo and Adidas told Caixin Global their stores were operating on reduced hours while the epidemic was ongoing. Over at the Nike outlet, a few customers wandered the aisles while several store clerks stood around idly. “It’s basically been like this all day,” one of them said.

Some of China’s largest companies took steps to restrict the number of staff in their workplaces.

Internet search giant Baidu Inc., which employs around 30,000 people, circulated a notice among staff requiring them to first undergo quarantine and receive company approval before setting foot in the workplace. “From Feb. 10, employees will return to work on our campuses in a safe, scientific, gradual, and planned manner,” the notice said. “Staff who have not been asked to return are to continue working from home.”

Other firms took extra precautions. Online retailer JD.com Inc., which employs more than 200,000 people, welcomed back frontline workers with face masks, protective goggles, gloves, thermometers and disinfectant. A spokesperson for the company told Caixin Global that JD.com was conducting regular inspections of its delivery stations and requiring workers who feel unwell to immediately visit a hospital for follow-up checks.

Shared workspace company WeWork told Caixin Global that the majority of its over 100 branches in Greater China, including locations in Beijing, Shanghai, Guangzhou and Chengdu, opened as usual on Monday. However, the company has urged employees with no urgent business in the office to work from home until Friday, a spokesperson said.

A 28 year-old surnamed He, who works for a consulting firm in the eastern metropolis, spent most of the day working from home. “The company’s mailed us disinfectant and face masks,” he told Caixin Global. “When I stepped out to buy some pizza for lunch, I saw very few people on the streets.”

Ding, who works for a pharmaceutical firm in Shanghai, said his company had told everyone to work from home until at least Feb. 17. “The company that manages our office building has told them anyone who comes into work today must register their ID number at the door,” Ding told Caixin Global. “Otherwise, they won’t let you in.”

There were signs that China’s manufacturing hubs were humming along, albeit at reduced capacity. A sales director surnamed Ma at a midsize components factory in the southern city of Dongguan told Caixin Global around 80% of the company’s assembly line workers were on shift Monday, although those from severely afflicted regions had yet to return. “All the large factories are basically up and running, but some only have about one-third of their usual workers,” Ma said.

The coronavirus outbreak, which erupted in China in December, has sent shockwaves through the country’s economy, causing business suspensions, disrupting supply chains, and severely curtailing the movement of millions of people.

An article published last week by the Economist Intelligence Unit predicted that China’s yearly real GDP growth could slump to 5.4% if the epidemic comes under control by the end of March as expected, but it would fall further if the epidemic is not contained.

Several cities in Hubei, the central Chinese province hit worst by the outbreak, remain under lockdown.