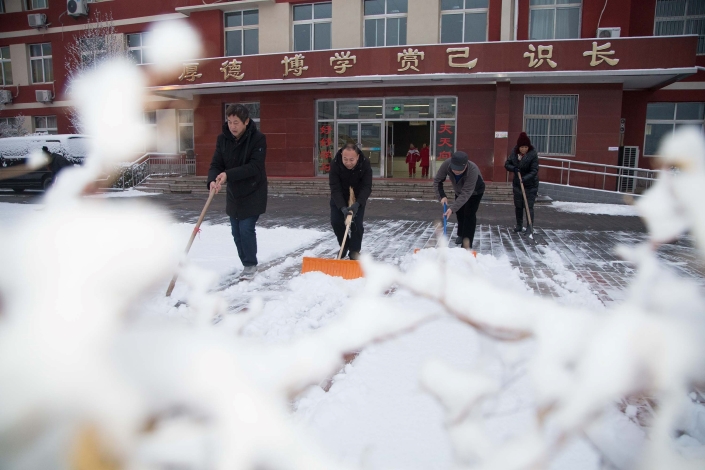 Photo: VCG
Chinese authorities have extended the weeklong national holiday and closed schools around the country until further notice as part of emergency measures to control a viral epidemic that has struck during its busiest travel period.

The moves are among a wave of measures both in China and overseas that aim to stem the flow of people as the number of reported cases worldwide of the new strain of coronavirus, also known as nCoV-2019, neared 3,000.

The State Council, China’s cabinet, announced Monday morning it would extend the Lunar New Year public holiday by an extra three days to Feb. 2, in a bid to prevent the spread of the disease by limiting large gatherings at places like travel hubs, offices and academic institutions.

Schools have been instructed to await further instruction from the Ministry of Education before resuming classes.

The extended break flies in the face of appeals made by senior officials on Sunday for China to return to pre-holiday levels of factory production to address widely reported shortages of medical equipment, such as protective masks and garments, in areas with high infection rates.

“We must at all costs return to work and manufacturing and raise our output,” Wang Jiangping, vice minister of the Ministry of Industry and Information Technology, had said at a press conference.

Shanghai’s municipal government said Monday that businesses should not reopen before Feb. 9, and that classes should not resume until Feb 17. China’s eastern Anhui province also followed suit with new traffic control measures on both roads and highways including body temperature screenings.

The measures come as Singapore’s government expanded its travel advisory Monday, recommending against non-essential travel to the entire Chinese mainland — some of the strongest measures taken by any country.

Travel advisories issued by other nations have mostly focused on Hubei province in Central China, the epicenter of the coronavirus outbreak, where 76 of the 80 deaths resulting from pneumonia, an advanced form of the disease, have taken place. Over the weekend, several countries including the U.S., Australia and France either issued advisories or raised their warning levels, with some looking to evacuate their citizens.

Meanwhile, Hong Kong and Macao shut their borders to those originating from the area. In the early hours of Monday morning, the Hong Kong and Macao governments both imposed immigration bans on residents of Hubei province and those who visited the region in the past 14 days, although in Macao, individuals who present a certificate confirming they are free of infection may be allowed to enter.

As of Monday morning, Hong Kong confirmed eight cases of the disease while Macao reported five.

Since Thursday, Wuhan and several other cities in Hubei have implemented citywide lockdowns, including a ban on local and intercity transport such as flights and rail services, in an attempt to quarantine millions of residents. Beijing and Tianjin have suspended long-distance coach services while Shanghai has suspended coaches and hired cars.

Monday’s measures came after Zhou Xianwang, mayor of Wuhan, announced overnight that more than 5 million people had left the Chinese city out of a combination of virus fears and for the Lunar New Year holiday — some while the city was in lockdown.

Since it was reported to the World Health Organization in December, the coronavirus has spread to countries and regions including Thailand, Japan, South Korea, Vietnam, the U.S., Singapore, Australia and Canada.