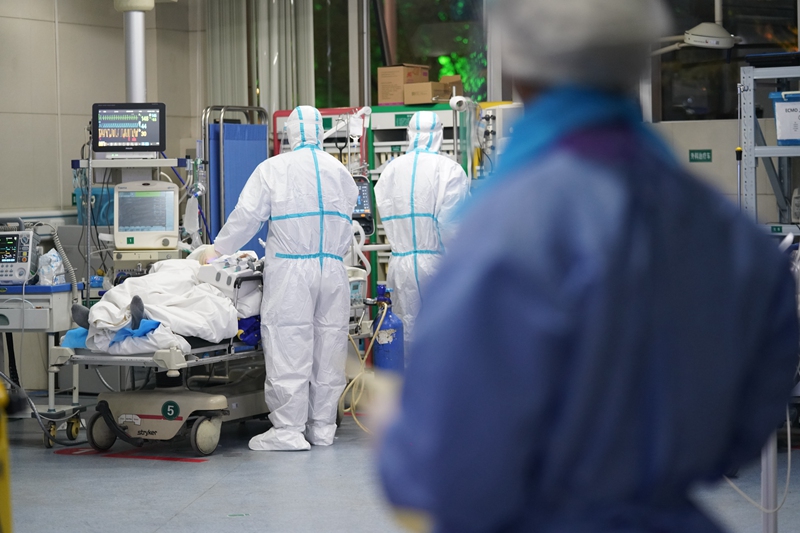 Doctors apply treatment to a patient in the intensive care unit at the South Central Hospital in Wuhan on Feb. 4

(Wuhan) — It took only a few minutes for Peng Zhiyong to make a decision that he knew could be highly risky — admitting a patient diagnosed with “unknown viral pneumonia.”

That was Jan. 6. Peng, the director of the Intensive Care Unit (ICU) at the South Central Hospital of Wuhan University, signed off on accepting the patient into his department. Before that, the person from Huanggang, a city 76 kilometers away from Wuhan in Hubei province, was turned away by several hospitals.

The patients’ mysterious, infectious pneumonia later proved to be caused by a new strain of coronavirus known as 2019-nCoV. Since December the disease quickly spread from Wuhan to the rest of China and beyond. As of Saturday, confirmed infections of the virus surpassed 35,000 in 25 countries. It is evolving into one of the most dangerous epidemics in the past 20 years.

But in early January, public awareness of the looming epidemic was still limited. Word started circulating among physicians in Wuhan of a rising number of pneumonia patients infected by a virus similar to SARS — a deadly coronavirus that claimed nearly 800 lives in a 2003 outbreak.

As a veteran physician with Ph.D. degrees in anesthesiology and intensive care medicine, Peng was a frontline doctor in Hong Kong 17 years ago during the SARS outbreak. Rich clinical experience gave him an acute sense of the new disease’s virulent potential. On Jan. 3, Peng learned that gene sequencing results from BGI Group found that the new virus shares 80% of the genetic code of the SARS virus.

“I knew at that time the new virus was likely to be passed through humans,” said Peng in a recent interview with Caixin.

After accepting the Huanggang patient Jan. 6, Peng called the hospital president asking to apply stringent quarantine measures in the ICU department. The ward was renovated in accordance with the highest quarantine standards for SARS control with independent air supply, according to Peng.

While some colleagues questioned whether the measures were excessive, Peng insisted they were necessary. And he was proved right. The quarantine zone originally had 16 beds. All of them were filled three days after the first patient moved in.

Now the 150-member team of South Central Hospital’s ICU department led by Peng has been fighting against the virus for more than a month. All medical workers have given up holidays and worked in shifts to keep the ICU running at full capacity. In the face of shortages of protective gear, doctors and nurses have to reduce food and water consumption while working to avoid leaving the quarantine zone and changing suits.

As the battle on the front lines grinds on, understanding of the new coronavirus is becoming clearer. In the latest edition of its treatment plan, the National Health Commission confirmed that the virus is mainly transmitted through respiratory droplets and contacts. Patients infected show different degrees of symptoms ranging from minor, flu-like symptoms to fever, lung infection, respiratory failure and even multiple organ failures.

Compared with SARS, the new virus often causes minor symptoms at the beginning but is more contagious and can cause infected people to deteriorate faster. The disease usually takes three weeks to escalate to critical condition, medical experts told Caixin.

“We still understand very little about the pathogenesis of the virus and are not clear about the actual cause of the multiple organ failures,” said Jiang Li, ICU director at Beijing Xuanwu Hospital who is currently in Wuhan. It makes the rescue and treatment of severe patients a challenge, Jiang said.

The rapid course of the disease means that intensive care professionals are the main force battling the virus. As the epidemic continues unfolding, the number of critical patients is rising rapidly. According to official data as of Thursday, there were 4,821 patients in critical condition, up from 962 from the previous day.

“We are racing with death to snatch (the life) of patients,” Peng said.

Huang Xiaobo, ICU director at the Sichuan People’s Hospital, arrived at Wuhan on the night of Jan. 25 in the first wave of physicians to aid Wuhan’s disease control. He was assigned to the Wuhan Red Cross Hospital the next day, where he encountered a devastating scene.

The Red Cross Hospital is a small, district institution with 400 medical workers and 300 beds. On Jan. 22, the hospital was designated by the Wuhan government as one of the institutions to treat fever patients. After that, it was overwhelmed as more than 700 patients flooded in every day. Ordinary fever patients were mixed with those infected by the coronavirus, and the whole hospital was contaminated, Huang said.

“All the beds were occupied, and even the hallway was packed by patients for observation. People only wearing one-time masks came in and out freely,” Huang said. A large number of medical workers at the hospital were also infected, he said.

As of Jan. 26, about 60 of the Red Cross Hospital’s medical workers had either been diagnosed with the coronavirus or were under observation. The rest of the staff, no matter from which department, were transferred to the respiratory department after a short training. They were “like cannon fodder” rushing to a battlefield, Huang said.

Following the urging of Huang and his team, the Red Cross Hospital closed for three days to set up clear boundaries between quarantine zone, clean area and buffer zones. Doctors also used the three days to examine all hospitalized patients and separate those infected with coronavirus from those who were not.

The case of Li Wenliang, a 34-year-old ophthalmologist in Wuhan, illustrates the rapid deterioration the disease can cause. Li was one of the whistleblowers who first set off alarms about the new virus and was also infected while treating patients. He told Caixin in a telephone interview Jan. 30 that he expected to recover and was determined to return to the fight.

But on Feb. 5, Li told Caixin in a message that his condition worsened. In the early morning of Feb. 7, Li died after an hours-long rescue attempt in the ICU.

Huang from the Sichuan People’s Hospital also remarked upon the rapid development of the new virus in patients. Unlike flu viruses such as H7N9 and H9N1, which often cause severe symptoms at the beginning, most patients infected with the new coronavirus first show mild symptoms but quickly deteriorate after a certain point, Huang said. Minor symptoms such as low fever and fatigue at early stages also make the new virus more difficult to detect and control.

Peng said it often takes three weeks for patients to develop from minor flu-like symptoms to critical or even fatal conditions.

“People with strong immune systems may recover after two weeks, but the elderly and those with basic health issues could worsen to respiratory failure and other organ failures,” Peng said. “The second week is the watershed.”

Among patients with mild symptoms, 15% to 20% seem to worsen in the second week, said Du of the Peking Union Medical College Hospital.

For those whose conditions turn critical, the third week is the fatal test, doctors have observed.

“Some get through the third week, but others won’t make it,” Peng said.

Clinical records show that the average age of infected patients is 56 while those entering the ICU average 66, indicating older people are more vulnerable to the virus.

“About one-third of patients I observed showed systemic inflammatory response syndrome that led to multiple organ failure and critical conditions,” Peng said. “It happened in only two or three days for some patients.”

According to medical experts and frontline doctors, 15% to 20% of new coronavirus patients could develop severe conditions, and among them 25% to 30% worsen to critical condition.

There has yet to be a widely agreed mortality rate for the disease. Several ICU doctors estimate that the death rate among patients in critical condition ranges from 10% to 40%, meaning the overall mortality rate may be 0.6% to 1%.

What is more worrisome is the virus’s damage to people’s lower respiratory systems, causing serious consequences even after a patient recovers. Peking Union’s Du said it could take at least six months for patients to recover heart and lung function.

The mission of ICU doctors is to help patients maintain body functions as long as possible until the virus is exhausted so that the patients’ immune system can gradually recover, Huang said.

But rescue efforts are sometimes restricted by a lack of equipment, Huang said. The doctor said he witnessed five deaths in the ICU at the Red Cross Hospital since he arrived. Three of them would still have had the chance to survive if a procedure were available that’s known as extracorporeal membrane oxygenation (ECMO), which circulates blood through an artificial lung back into the bloodstream, he said. But as a small institution, the Red Cross Hospital doesn’t have such equipment.

While more ICU doctors like Huang and Peng have come to Wuhan to rescue patients from the brink of death, Jiang said more efforts should also made at the early stages to prevent mildly ill patients from deteriorating.

“What I want to do most at this moment is to solve the problem upstream, to find out patients who are in the process of deterioration and apply treatments for them as early as possible,” Jiang said.

Delayed treatment allows many mild patients to deteriorate and miss the best opportunity to recover, the doctor said. It is believed to be the major reason that Wuhan has recorded a much higher than average mortality rate than the rest of the country.

ICU doctors fight hard to rescue critically ill patients from death, but that is a late remedy, Jiang said. The most effective way to tame epidemic is to control the sources of disease, cut off transmission paths and protect vulnerable groups, she said.

“I guess none of the three things has been done well,” she said. “What we are seeing is too late.”

“It is easier to control the disease before patients’ condition develops into severe conditions,” Peng said. “After that, it is much more difficult to cure and would demand more of already-scarce medical resources.”

For now, there’s no relief in sight for the ICU doctors.

“The number of severe patients continues rising, and ICU doctors have to be prepared for a lasting war,” said Xi Xiuming, an intensive care medicine professor at Beijing Fuxing Hospital.

Read more about Caixin’s coverage of the coronavirus epidemic.