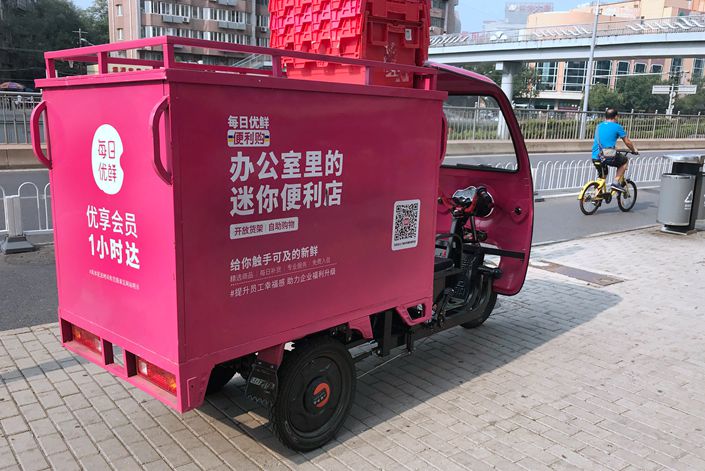 Internet grocery suppliers are facing exploding demand due to the outbreak of a new coronavirus in China, leading to spates of frenzied online buying and long delivery times for millions of Chinese consumers purchasing food from the safety of home to avoid contagion.

The sudden feast for sites like Missfresh and Freshippo contrasts sharply with the plight of restaurants, which are shaping up as one of the hardest hit sectors shunned by people afraid of venturing outside. Many brick-and-mortar supermarkets also remain open during the outbreak, as local governments seek to reassure residents that ample food supplies will be available.

A situation of “free-for-all buying” of goods in short supply has developed on Alibaba’s Freshippo online grocery site, the company said. In more typical times, the site needs to replenish its stock two to three times a day, though that could rise to as much as seven or eight times during the peak Lunar New Year period that fell in late January this year. But in the current market, the company sometimes has to replenish its stock as often as every half hour.

The big jump in business is also straining Freshippo’s logistics capabilities. About 70% of the company’s deliverymen typically choose to stay on the job during the Lunar New Year holiday period, which is normally enough to meet seasonal demand, said a company worker, speaking on condition of anonymity. But the sudden demand surge has led to a shortage of delivery labor.

“Midnight and 8 a.m. are our two peak delivery times, meaning sometimes it could take up to two hours to clear the backlog,” she said.

Missfresh CFO Wang Jun said that in the wake of the outbreak, total demand for his company’s products has doubled, with order volume up three to four times. Missfresh’s average order size has also jumped from 85-90 yuan ($12.18 to $12.89) to 120-125 yuan.

The online grocery platform of online-to-offline services specialist Meituan has also seen a clear and continuing rise in business activity in the cities of Beijing, Shanghai, Shenzhen and Wuhan, a company representative said. Daily sales in Beijing are now as much as two to three times what they would be during normal times.

But the news isn’t all rosy for such site operators. While business may be booming, rising prices for vegetables, sometimes caused by lack of supplies due to the Lunar New Year holiday, have put pressure on online operators’ margins, according to some operators.

At the macroeconomic level, the surge in demand for food — and difficulty getting it from farms to consumers due to seasonal lack of workers — has driven China’s consumer inflation to highs not seen for eight years. Earlier on Monday, the nation’s statistics bureau reported the consumer price index (CPI) rose 5.4% in January, citing rising food prices and the coronavirus outbreak as factors behind the big increase.