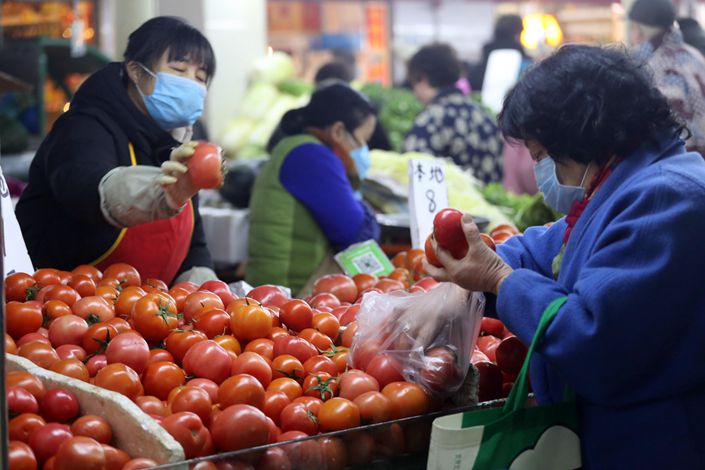 Rising food prices helped to fuel a 5.4% year-on-year jump in consumer prices in January, 0.9 percentage points higher than the previous month and the highest since October 2011, as China’s economy began to feel the pain of the novel coronavirus outbreak, official data (link in Chinese) showed on Monday.

The consumer price index (CPI) growth beat the median estimate of a 4.9% rise (link in Chinese) by a Caixin survey of economists.

The price hikes were mainly caused by the Lunar New Year holidays and coronavirus outbreak, according to a statement (link in Chinese) by China’s National Bureau of Statistics. A favorable base effect was also a factor, the statement said, contributing 4 percentage points of the CPI increase.

In January, the CPI rose 1.4% compared with the previous month, the first month-on-month acceleration after two months of deceleration.

Supply disruptions and hoarding due to the coronavirus outbreak may have helped to keep food prices elevated during the week after the Lunar New Year, a period in which they would normally drop back, economists from research firm Capital Economics Ltd. said in a note.

Analysts from China Merchants Securities Co. Ltd. expected (link in Chinese) that CPI growth could slow over the next few months as base effects diminish and the pork supply rebounds. China’s stock of brood sows rose 2.2% month-on-month in December, the third rise in a row, according to data (link in Chinese) from the agriculture ministry. The analysts estimated that CPI growth would dip below 4% after the first quarter of the year and under 3% after the second quarter.

Producer prices ended a deflationary period last month, with the producer price index, which gauges changes in the prices of goods circulated among manufacturers and mining companies, up 0.1% (link in Chinese) year-on-year in January, the first rise since May 2019. Capital Economics economists said it still might be too early to see the impact of the hit to demand on prices as factories were closed during the last week of January. Some factories have not resumed production yet as the epidemic has forced many workers to stay home.

Many economists said that the coronavirus outbreak would hurt China’s economy in the first quarter of this year, with the damage to growth most concentrated in consumption. Analysts with consultancy CEBM Group Ltd. estimated that GDP growth could be 1 to 1.5 percentage points lower than earlier predictions for the first quarter. For the entire year, they forecast GDP growth to be 0.3 to 0.5 percentage points lower than they originally forecast. The virus’s impact on discretionary spending, which includes things like leisure and entertainment, will not be easy to recover from, though its impact on nondiscretionary spending will rebound shortly after the epidemic subsides.

Economists from Goldman Sachs (Asia) LLC and Beijing Gao Hua Securities Co. Ltd. revised down their 2020 household consumption growth forecast for China from 7.4% to 6% as many public facilities are shuttered and stores are closed across the country.