By Ding Jie, He Jingwei and Mo Yelin 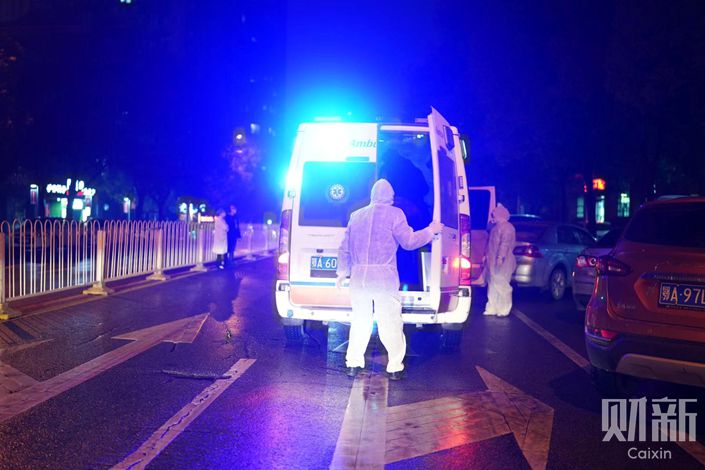 In the Baibuting community in the coronavirus-stricken city of Wuhan, Central China’s Hubei province, residents are still waiting for information on local infections. Photo: Ding Gang/Caixin

Weeks after officials allowed a massive Lunar New Year gathering to go on in a Wuhan community despite knowing of the new coronavirus threat, residents of the Baibuting area say they still haven’t been told the true extent of the outbreak in their area.

As of Monday, no official figures had been released for either confirmed or suspected coronavirus infections in the neighborhood located in Wuhan’s Jiangbei district, several residents told Caixin. “We don’t know how things are developing as the authorities are declining to reveal the number of infections,” said one resident, speaking on condition of anonymity due to the situation’s sensitivity.

Wuhan is believed to be the origin of the new coronavirus that has killed more than 1,000 and infected more than 40,000 in China, as of the end of Monday. Baibuting came under spotlight last month after it was revealed that a huge Lunar New Year gathering of more than 10,000 families was allowed to take place even though local officials already knew of the virus’ existence.

Though no official data has been released showing the outbreak’s magnitude in Baibuting, Caixin has learned of at least two confirmed cases in the community. One, involving a 56-year-old named Tang Guihua, was diagnosed on Feb. 4.

Other cases of fever — a primary symptom of infection — have also been seen in the neighborhood. A Caixin investigation on Feb. 4 found an unknown number of cases of fever existed in at least 57 buildings in the community. A worker from the neighborhood committee that provides support services for Baibuting told Caixin that the community was seeing a daily increase of three to five suspected cases of infection at the time.

On Monday, a microblogger claiming to be a Baibuting resident wrote a plea for help on Weibo, the Chinese equivalent of Twitter. “There were no quarantine centers in the community to deal with people who are suspected of having the virus and those who have experienced fever,” the post read. “Many of them are still staying at their homes. We are in despair.”