How Hot Money, Not Chip Move, May Have Sent TV-Maker’s Stock Sky High 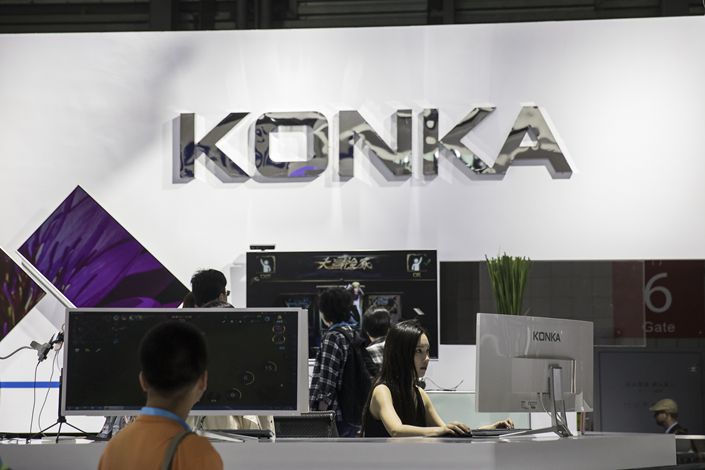 Revenue from Konka’s chip-making efforts has so far had little effect on the company’s bottom line. Photo: VCG

A TV-maker that drew attention after its stock posted a week of dramatic growth may have been buoyed by handful of hot money trades, undermining its claim that the company’s push into semiconductors was behind its strong performance on the bourse.

On Feb. 4, the second trading day of the Year of the Rat, shares of Shenzhen-listed Konka Group Co. Ltd. shot up 10% hitting the daily limit. That prompted the company to issue an explanatory statement pointing to its chip-making strategy.

Konka has gone on to hit that upper limit each trading day since, except for Tuesday, when its shares rose 5.7%. Mainland regulators place an upper and lower limit of 10% on daily stock movements in an attempt to prevent speculation.

The company’s blistering performance came amid a generally sluggish showing by China’s financial markets, which have been battling fallout from a virus outbreak that has claimed more than 1,100 lives and saw the Lunar New Year break extended to reduce contagion risks.

Konka’s shares were trading at 4.69 yuan that day. They closed 90% higher at 8.81 yuan on Wednesday, giving the company a market cap of 22.2 billion yuan.

In its Feb. 4 statement, the company pointed to recent efforts to move into semiconductor manufacturing after it partnered with Henan province-based Konsemi Storage Technology Co. Ltd. Konka said it sold 100,000 chips in December alone, and aimed to sell up to 100 million by the end of this year.

But a Caixin analysis suggests much of Konka’s trading volume during the period came from just a handful of traders, an unusual trading pattern that can indicate price manipulation.

Revenue from Konka’s chip-making efforts has so far had little effect on the company’s bottom line. The firm is yet to announce its 2019 earnings, but it said in a statement Feb. 6 that it had so far made 200,000 yuan from selling semiconductors, comprising 0.01% of its total revenue last year.

Konka reported profit of 353 million yuan for the first half of 2019, on revenue of 26 billion yuan.