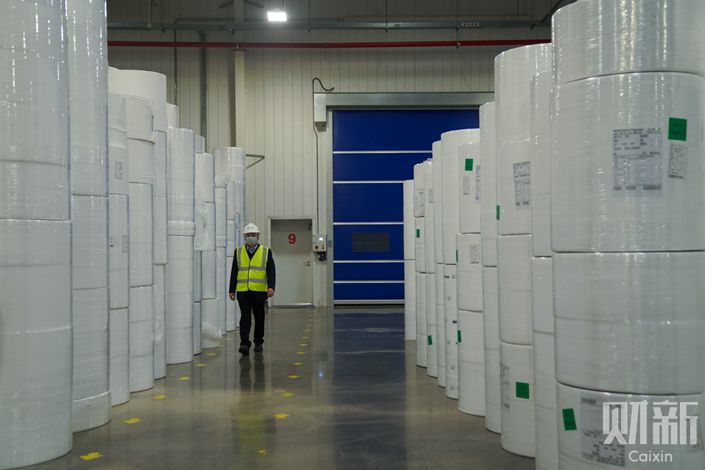 People across China are finding it hard to get medical supplies, especially face masks, as efforts continue to contain the novel coronavirus outbreak.

Many manufacturers in nonmedical sectors have taken the initiative to refit their production lines to produce masks and protective suits with policy support from their local governments, Caixin has learned.

Though this added production capacity will improve supply of these emergency items, it will not be an instant fix. Production will not go online for at least a couple of weeks as newly purchased manufacturing equipment is installed, shortages of upstream raw materials are overcome, and the weeks-long production cycle for surgical masks kicks in.

Many provinces have enacted emergency approval procedures for nonmedical manufacturers to refit their factories to produce medical supplies, especially masks. By 4 p.m. Friday, 88 new licenses for medical device production had been approved, including four for medical protective masks, 17 for medical surgical masks and 20 for disposable medical masks. These included, around 600 licenses have been approved around the whole country for producing medical masks.

The famous shoe-making city of Putian in East China’s Fujian province, for example, decided earlier this month to subsidize businesses to refit existing or build new production lines to make masks and protective suits to help with ongoing efforts to contain the virus. Companies able to meet certain criteria and start production in time will get a refund of as much as 60% on the purchase of necessary equipment.

A government official in Putian in charge of helping shoemakers shift to mask production told Caixin that the city had not previously had any mask-makers. But to ensure that its residents and industries have enough protective gear during the outbreak, the local government developed the new policies. It has been working with a range of different businesses in the city to step up capacity to make medical protective gear.

The official said factories in Putian have started producing ordinary masks with a maximum capacity of 2 million units a day. But medical masks call for stricter production criteria, so more time was needed to refit workshops to meet quality standards.

Along with manufacturers transitioning from other industries, some places in China have restarted mask factories previously shut down for years.

In the city of Bazhong, Southwest China’s Sichuan province, a mask factory built in 2003 for the outbreak of severe acute respiratory syndrome (SARS_ has been relaunched after being closed since 2010. Local staff familiar with the situation told Caixin the factory was recently revamped and started production on Feb. 3.

But as it’s now difficult to purchase the most advanced production lines, the factory is continuing to use its semi-automatic legacy equipment from the past. This involves workers manually sewing the masks after machines cut them into shape.

As mask makers gradually resume production after the extended Lunar New Year holiday, capacity is expected to start returning to normal levels. But industry insiders told Caixin there will be a delay of a week or two before the newly produced masks can get to the market.

Liu Jingzhen, chairman of state-owned pharmaceutical-maker Sinopharm, explained that after masks leave the production line, they are not ready for use until they go through proper sterilization and chemical treatment to meet certain safety criteria. This process could take seven days to two weeks.

As the equipment needed to make the masks, there are also continuing shortages of raw materials from upstream supply chains.

Sources from Guangdong Sunlight Medical Equipment Co. Ltd. told Caixin the price for mask-related raw materials has inflated 10-fold due to shortages, especially of meltdown nonwoven fabrics, a crucial filter material for medical masks. Some suppliers have even tried repurposing material for masks from their lower-stream factories. Sunlight Medical, with a capacity for 50,000 masks a day, recently received express manufacturing approval in less than half a day from regulators in South China Guangdong province.

Associate Medical & Hygiene Products (Shixing) Co. Ltd., a company in Shaoguan, Guangdong, was recently approved to make surgical masks. But a staff member told Caixin it had received only one piece of newly purchased mask-making equipment and could not start sizeable production until the rest arrived. Some of their items were scheduled for delivery after May, he said.

One supplier of production equipment explained to Caixin that the components used for mask-making usually take at least three months to be manufactured. Even in a race against time to respond to the crisis, it would take more than 20 days. Too many orders have been received since the virus outbreak, he said, and most were still nowhere near a prompt delivery.