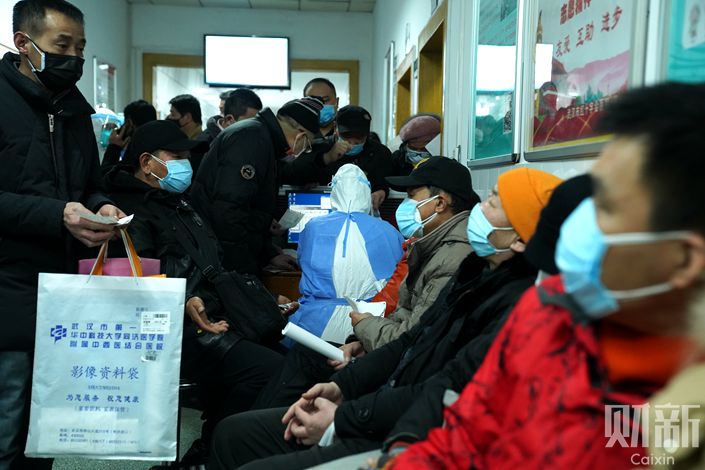 Wuhan’s self-quarantine policy went ahead despite concerns that it posed a risk to public health. Photo: Cai Yingli/Caixin

The deaths of four family members in the central Chinese city of Wuhan who succumbed to the new coronavirus while self-quarantining in the same apartment have once again raised serious questions about the policy of staying home imposed at the start of the epidemic.

Chang Kai, a notable director at Hubei Film Studios, died on Feb. 14 from pneumonia caused by the virus also known as Covid-19, according to an obituary published by his employer. He was 55. His father, mother, and older sister also died from the same illness between Jan. 28 and Feb. 14, Caixin learned from one of Chang’s former college classmates.

The story of their deaths starkly illuminates how authorities in the disease-stricken city may have mishandled the spread of the virus by initially pursuing a policy of home quarantine in a bid to relieve pressure on overburdened, undersupplied hospitals.

That policy went ahead despite concerns that it posed a risk to public health. Chen Bo, a professor at Wuhan’s Huazhong University of Science and Technology, told Caixin that home quarantine could spark clusters of cross-household and cross-community infections, and cause more deaths by allowing serious infections to progress without treatment.

One of Chang’s former schoolmates told Caixin that Chang’s father first reported symptoms of coronavirus infection on Jan. 25, the first day of the Lunar New Year. Chang took the older man to several hospitals in Wuhan but was turned away each time due to a shortage of beds. Three days later, Chang’s father died.

But the family’s tragedy was only just beginning. On Feb. 2, Chang’s mother died after contracting the disease.

The same day, Zhong Nanshan, a leading Chinese epidemiologist helping direct the response to the outbreak, said in a TV interview that it was “extremely dangerous” for hospitals with insufficient beds to send home people diagnosed with the virus or suspected of having it.

Also on Feb. 2, authorities in Wuhan announced they were ending the home quarantine policy, and began sorting patients into confirmed cases, suspected cases, people with fevers — a common symptom of both the new coronavirus and many other health problems — and people who had been in contact with coronavirus patients but had not yet shown symptoms. The new policy isolated patients in each category and treated them accordingly.

However, the change in approach came too late for the Chang family. On Feb. 14, hours after Chang himself passed away, his older sister also lost her battle with the virus. Chang’s wife, who also contracted the disease, remains in a serious condition.

One of Chang’s former college classmates showed Caixin a message written by the filmmaker on his deathbed describing his family’s fruitless search for hospital beds, his grief at his parents’ demise, and his own ailing health.

Written in poetic classical Chinese, it ends: “As I draw my last feeble breaths, I say to my family, my friends, and my son in faraway London: All my life, I was a filial son, a responsible father, a loving husband, and an honest person! Farewell to those I love and to those who loved me!”

Friends paid homage to the “kindhearted and easygoing” director. “I hope this tragedy will be investigated so we can know whose fault it was,” the classmate said.