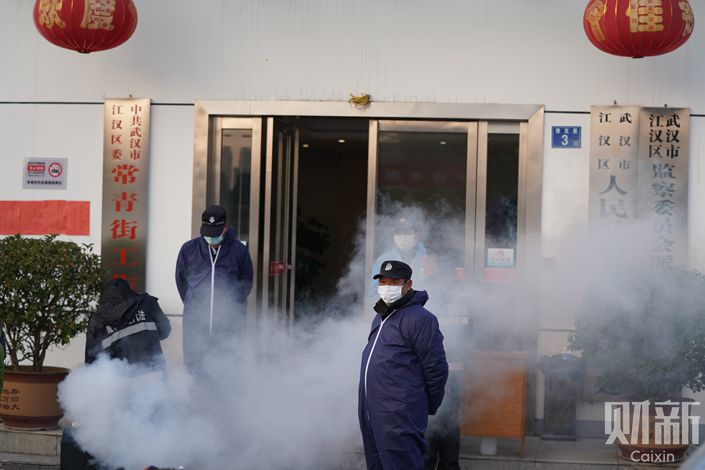 China’s coronavirus epidemic remains serious. Authorities are continuously ramping up disease prevention and control measures, with several localities in Hubei, the province at the center of the outbreak, implementing so-called wartime controls.

The country faces great challenges to its ability to carry out these measures in a lawful, scientific and orderly manner. On Feb. 5, President Xi Jinping said at a government meeting that as epidemic reaches its toughest phase, it is increasingly important to manage prevention and control work according to the rule of law while ensuring that it progresses smoothly.

We believe the country’s response to the coronavirus epidemic is a stress test for the rule of law in China. The desperate situation we face is no excuse to neglect the principle of the rule of law.

However, when the epidemic erupted, officials in many parts of China pursued measures that evidently violated the law or citizens’ rights. Some areas arbitrarily closed roads, cut off villages and blocked the flow of traffic. Some publicly leaked the personal information of people who may have been infected. Other controls were overtly discriminatory, for example by denying entry to people from severely affected areas like Hubei, banning absent residents from returning to their homes, or stopping tenants from using rented apartments.

Many of the above policies won praise from people at the grassroots level, but that reaction was largely due to fear of the epidemic. The fact remains that governments at all levels allowed such behavior go unchecked and, in some cases, even actively facilitated it. Faced with unusual circumstances, the holes in Chinese-style governance became all too apparent. That’s a great failing of our country’s rule of law.

How to use thinking and methods guided by the rule of law during epidemic control is therefore a question that remains to be answered. Fortunately, some departments and localities have already seen the error of their ways. Recently, the Supreme Court and a number of government organs jointly issued suggestions on how to deal with criminal behavior that obstructs epidemic control work. The document clearly defines the criminal standards and legal consequences of resisting epidemic control, provides unified judicial and enforcement measures, and can also be seen as a response to previous cases that have sparked concern due to vague standards.

The General Office of the State Council has also issued a notice strictly prohibiting the arbitrary closure of high-speed roads, the obstruction of major provincial highways, the forcible quarantining of villages, the digging up of village roads, and the flow of emergency vehicles. We hope that these policies will be practically enforced.

Some government departments, not to mention a large number of citizens, claim that disease control should be free from abstract, sometimes-pedantic debates about the rule of law. After all, they say, who will be in charge if the epidemic gets out of control? Any abuses can always be corrected later. Faced with criticism of their heavy-handed responses, they loudly fire back: “Have you got a better idea?” Such claims rely on shelving the legality and rationality of the means in order to justify the ends. As China’s countless painful past experiences have proven, this can be a dangerous mix.

In order to advance disease control while hewing to the rule of law, we must first disencumber ourselves of the notion that desperate times permit desperate measures.

China already has laws and regulations governing epidemic control. For example, the Law on the Prevention and Treatment of Infectious Diseases and the Emergency Response Law both lay out detailed requirements on everything from announcing an epidemic to controlling one. In addition, emergency measures are subject to a host of legal norms. If all localities and government departments had strictly administered the current laws at the start of the outbreak, would the situation have deteriorated to the point we are at now?

When it comes to administering the law, we can’t afford half measures. The initial stages of the epidemic were marked by a lack of clear information, but the official silencing of Li Wenliang and other whistleblower doctors meant a grim situation festered further. The central government has stressed the need to carry out epidemic reporting and announcements in accordance with the law, by promptly and accurately reporting outbreak information according to statutory content, procedures, methods and timeframes. Up to now, this work has been far from ideal. In Hubei, and especially in Wuhan, we still don’t know the true number of infected people, leaving those involved in disease control with obvious blind spots.

Legal disease control methods must dovetail with the principle of proportionality. When faced with a number of different policy choices, we must choose those that best protect citizens while damaging their rights and interests as little as possible, not those that save the most trouble for the departments in charge.

Recently, a number of cases have emerged in which citizens have been punished for being suspected of “endangering public safety.” These types of cases are extremely complicated: Do they constitute deliberately spreading the virus? Such cases must be handled with extreme deftness and be able to withstand the dual tests of substance and procedure.

Officials who have not done enough to control the epidemic should be called to account and investigated where necessary. Those guilty of breaking the law or criminal behavior, such as official neglect or dereliction of duty, should be severely punished. The Supreme Court and other departments have clearly stipulated that during the course of disease control work, staff at national institutions whose roles require them to organize, coordinate, direct, or control responses, investigate disasters, provide medical treatment, spread information, guarantee and transport the supply of materials, and are found to have abused their position or neglected their duties with resulting significant damage to public property or the country’s or people’s interests, should be tried and punished under the relevant laws.

Several officials have already been removed from their posts for inadequate responses to the epidemic. In recent days, the central government replaced key leaders in the Hubei provincial and Wuhan municipal governments. Since the start of the epidemic, the substandard performances of certain officials in Hubei has been obvious to anyone who cares to look. The government’s internal discipline procedures shouldn’t mask the need for a full legal investigation.

As the epidemic continues to spread in Hubei, officials must ramp up policies like shutdowns, quarantines and medical treatment. Across the country, governments at all levels are caught between returning to work and risking more infections, and keeping people at home at great damage to the economy. Prevention and control already constitute a serious test of China’s rule of law. We hope that all levels of government in all areas will take measures that stand the test of time, that are successful, and that thereby form a precedent for China’s future development of the rule of law and the modernization of social governance.