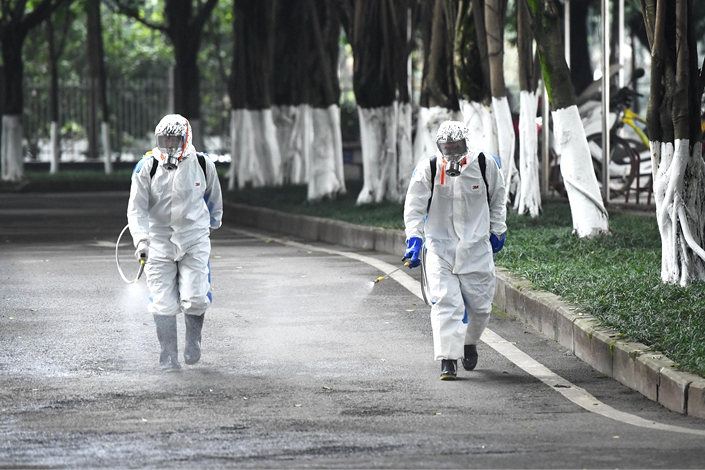 Workers spray disinfectant on a road at a factory in Southwest China's Chongqing municipality on Feb. 19. Photo: China News Service

Recent Covid-19 infections among workers at a Chongqing mineral producer and a Beijing e-commerce company reflect difficulties many Chinese firms are facing as they try to balance safety and productivity on resuming business after an extended Lunar New Year holiday.

The more serious of the cases began last month at a plant making titanium oxide, a mineral often used as a coloring agent, in the southwestern metropolis of Chongqing. The unit of Pangang Group has since been shut down completely, idling hundreds of workers, after a cluster of at least three infections occurred at its facility in the city’s Ba’nan district.

The other case at e-commerce firm Dangdang also dates back to last week as employees were returning to work following a Lunar New Year holiday that was originally set to end Jan. 31. Since that case involving a single worker emerged, all of the company’s employees have been asked to work at home, several company sources told Caixin.

The issues at the Pangang unit and Dangdang come as millions of Chinese slowly return to work. Many who work in big cities like Chongqing and Beijing come from smaller towns, and returned home for traditional family reunions during the Lunar New Year. The government extended the holiday by a week or more to try and reduce the likelihood of more infections as millions of people travel back to their long-term places of residence and offices.

To control risk, many companies are asking employees to continue working from home for some or all their hours to avoid chances for infection. But the cases at Dangdang and the Pangang unit illustrate the risks that come when offices do finally reopen.

The Pangang unit, which employees between 400 and 500 people, never fully closed during the Lunar New Year holiday. The company’s cluster of cases is believe to have begun after a worker surnamed Li attended a Jan. 21 gathering with former classmates, including one from Hubei province where the outbreak began, according to the city’s government news department. After the gathering Li returned to work the next day.

A third case was confirmed on Feb. 10, though the person had no close connection with the first two cases. Later that employee recalled resting in a company lounge where the infection could have occurred, a person familiar with the situation at the company told Caixin. At present, the company’s buildings have been sealed off and more than 100 employees have been quarantined at a hotel, Caixin has learned.

The Dangdang case involved a marketing department employee whose mother and sister were also infected, Caixin has learned, based on notes from a Wednesday evening conference call on the matter led by one of the company’s vice presidents.

The employee had come to Dangdang’s office for three and a half days from Feb. 10, the day it resumed business after the extended holiday. She had contact with some other employees during that time, according to notes from the call. Her mother was diagnosed with the virus on Feb. 15, and the employee was quarantined from that day. She later got a fever on Feb. 18 before being diagnosed.

In response to the case, Dangdang asked all of its employees to work from home from Feb. 19.