By Shen Fan and Guo Yingzhe 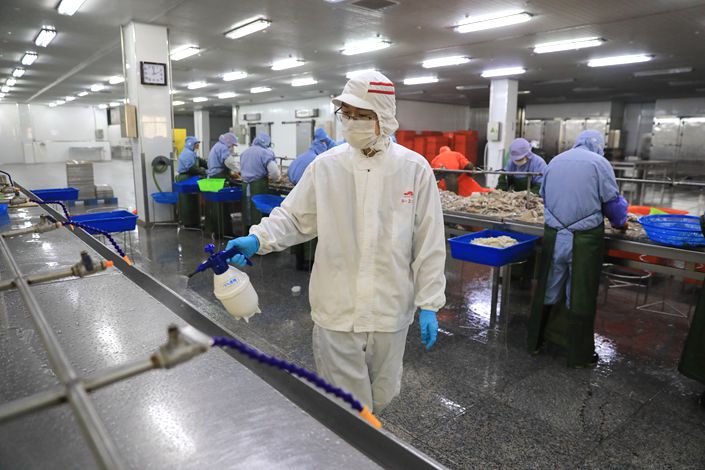 After the Lunar New Year holiday, workers at a seafood processing plant are back on the job Saturday in Zhoushan, East China's Zhejiang province. Photo: IC Photo

China is grappling with competing demands to fight the Covid-19 epidemic and get its economy back on track, as businesses struggle to resume operations amid a shortage of workers, disrupted supply chains and sluggish demand.

Many manufacturers have found it difficult to fill their factory floors as workers have had trouble returning to their jobs after going back to their hometowns for the Lunar New Year holiday due to travel restrictions. Among those who have made it back, many face mandatory quarantines to contain the spread of the virus.

Official estimates suggest that China’s migrant workers will make a total of around 300 million trips to return to the places they work in after the holiday, but only about 80 million trips had been made as of Friday, Liu Xiaoming, a vice minister of transportation, said on Saturday at a press conference (link in Chinese). Another 120 million trips will likely be made by the end of February, he said.

This means about one-third of the country’s migrant workers will still not have returned to work at the beginning of March. Last year, the number of migrant workers rose 0.8% to nearly 291 million, according to data (link in Chinese) from the National Bureau of Statistics.

Outside of Central China’s Hubei province, the outbreak shows signs of easing, as the number of new daily confirmed cases outside the province has now dropped for over 10 days in a row. Given the reduction in health risk, authorities have urged businesses to resume work and mitigate the economic impact of the virus. Travel restrictions have constrained consumption and production, and many small businesses face a severe cash crunch, risking bankruptcy if they do not resume normal operations.

Multiple local governments have rolled out measures to support companies in their areas, and some firms have deployed charter buses to help their employees come back. Electronics giant Foxconn Technology Co. Ltd. has offered extra bonuses on one of its campuses to employees able to begin work in the next few weeks.

A survey (link in Chinese) by investment bank China International Capital Corp. Ltd. last week showed that the energy, finance, internet and agriculture industries have seen higher ratios of operation resumption, while sectors that rely on direct onsite interaction, such as property, tourism and catering, have been more heavily impacted.

Labor shortages are not the only headache for businesses trying to restart operation. A survey (link in Chinese) of more than 2,100 small and midsize businesses by a team at Peking University showed that disruptions of logistics are another major obstacle, delaying supplies of raw materials for many manufacturers.

Many business owners said that shortages of funds and rising customer arrears were among the major issues they faced, and that the lack of labor was not as severe as imagined, according to an online survey (link in Chinese) of 950 business managers, employees and investors. “Operation of privately owned enterprises is basically driven by orders, and the anticipation of a shrinking market has led them to stop hiring or even start to lay off staff,” two organizers of the survey wrote.