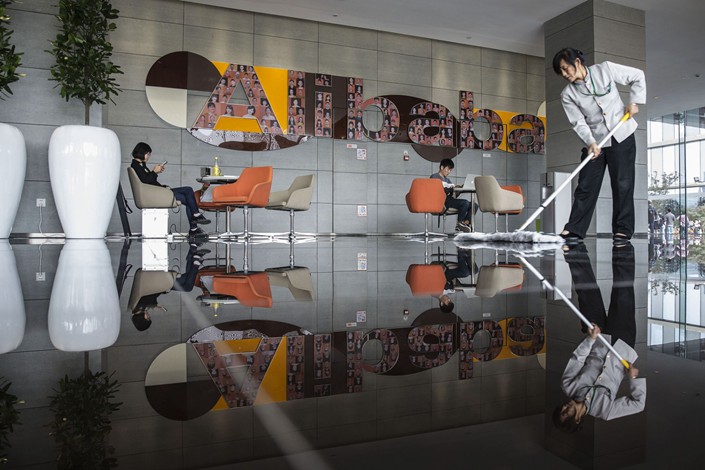 An employee mops the floor in a building lobby at the Alibaba headquarters in Hangzhou on Oct. 13, 2015. Photo: Bloomberg

(Bloomberg) — The coronavirus epidemic is exposing the dichotomy of the world’s second largest tech economy. Chinese businesses like Alibaba and Meituan with outsized footprints in the material world are rushing to contain the fallout while virtual denizens ByteDance Inc. and Tencent Holdings Ltd. ride a surge in social media and entertainment.

It boils down to the difference between hawking analog and digital wares. Alibaba Group Holding Ltd. and Meituan Dianping have shed $28 billion of market value since Covid-19 erupted in central China in January because they depend on millions of people and trucks to ferry packages and meals through an increasingly tangled nationwide transport network. WeChat operator Tencent, which flogs virtual goods like costumes and armor in mobile games or sprinkles advertising online, has gained about $18 billion. Its market value now hovers around half a trillion dollars.

More than any other company, Alibaba’s fate is intertwined with that of the world’s No. 2 economy. Its caution on Feb. 13 about weakening earnings exposed just how much China’s most valuable company depends on old-fashioned elbow grease in delivery, manufacturing and logistics. The e-commerce giant warned of a “significant” hit this quarter because the people who take orders, fabricate products and then ship them to doorsteps can’t get to their jobs. It’s a reminder of how much the fortunes of China’s tech giants hinge on unglamorous, analog tasks — at their peak, Alibaba’s partners deliver upwards of a billion packages a day.

“We just have fewer delivery people now because my co-workers couldn’t get back to work,” said a courier for Alibaba partner SF Express who would only give his surname as Qiu before dashing off. “Those of us still working are assigned more packages. Good thing I got a break during the Spring Festival,” he said, referring to the Lunar New Year holidays.

China’s corporations are struggling to cope with the coronavirus outbreak to varying degrees. Some such as Tencent and TikTok-owner ByteDance are benefiting from a vastly increased audience as millions are confined to their homes, with mobile gaming and livestreaming their only recourse to entertainment. Tencent, which reports earnings in March, is expected to unveil a surge in time spent on games such as Honor of Kings and growth on WeChat. For now, analysts are projecting its fastest pace of sales growth since 2018 in both the December and March quarters.

But few in tech offer as broad a glimpse into business under the epidemic than Alibaba. The company initially benefited from a surge in online shopping from millions confined by the largest work-from-home undertaking in history. Yet, it turns out, a lot of the millions of packages that get delivered every day are cheap items such as groceries and face masks. Consumers are eschewing pricier merchandise given growing fears that the eventual hit to the Chinese economy could be far worse than expected.

“Logistics is probably the biggest bottleneck right now, but it is improving. However, it is not the only bottleneck,” said Jerry Liu, a Hong Kong-based analyst with UBS who expects things to get back to normal only around the second half. “We do assume weaker demand for e-commerce platforms even if online penetration is higher in recent weeks. Based on our checks, a part of that is due to less spending on things that are not urgent, such as apparel or electronics, versus outbreak prevention items or food.”

Alibaba’s got other problems too — like discontent in the ranks. Hangzhou, its home, is a city under self-imposed siege. Just an hour from Shanghai, the city famed for its scenic lake has imposed some of the harshest quarantine and coronavirus-prevention measures outside of the outbreak’s epicenter. Into its third week, the clampdown is posing unusual challenges to tens of thousands of employees that chieftain Jack Ma proudly proclaimed only last year were more than willing to go the extra mile.

For one employee, the ordeal began weeks ago. Local officials barred the Alibaba staffer from returning to her own rental apartment for days because she was from out-of-town. She lived and worked from a colleague’s apartment, sending a selfie to her boss every morning to prove she was logged on and raring to go. She’s only allowed to leave her temporary quarters once every three days.

“There’s no such thing as counting overtime hours at Alibaba,” said the 27-year-old who goes by Lilac but wouldn’t allow the use of her last name for fear of reprisal. “You have to check messages on DingTalk whenever it rings.”

An Alibaba spokesperson said the company was helping merchants cope. Streams on Taobao Live, where brands and merchants showcase products to prospective shoppers, have more than doubled since the start of February, the company said in a messaged statement

“On our platforms and throughout our ecosystem, we’ve rolled out measures to mitigate much of the pain being felt by merchants and to restore ‘normalcy’ through technology,” the spokesperson said.

Longer term, any hit to China’s economy will of course wallop consumer spending across the board — regardless of whether it’s virtual or physical goods. That means Tencent and ByteDance get hammered too.

But Alibaba has an ace up its sleeve. Its cloud computing arm is China’s leader and the foundation for much of a post-outbreak surge in online activity — the virtual piping of increasingly digital businesses. Though barely a tenth of revenue at present, it’s been growing at 60%-plus year-on-year even before the epidemic.

Their own warnings aside, investors know better than to count the company out. During the SARS epidemic of 2003, Alibaba not only remained operational despite stringent quarantine measures, it successfully launched Taobao from Ma’s apartment — the online shopping platform that catapulted the company into the stratosphere.