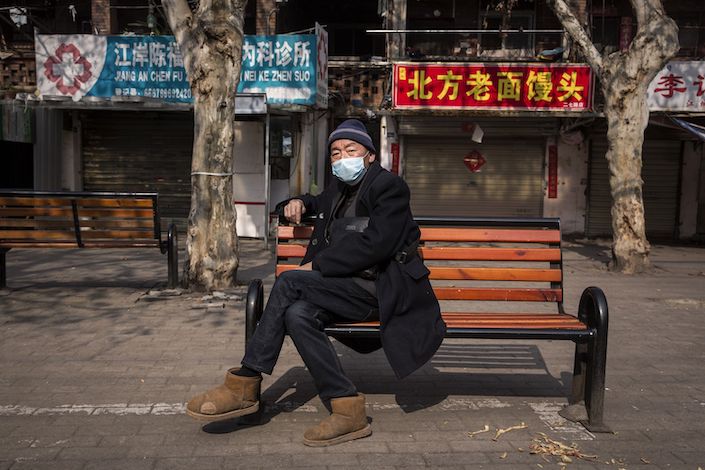 An old man sits on a bench in Wuhan on February 5, 2020. Photo: Bloomberg
At least 19 people, mostly seniors, died in a social welfare facility in Wuhan located just one block away from the seafood market where the deadly Covid-19 outbreak is suspected to have originated, even though the local government acknowledged only one death from the virus.

As of last Thursday, 11 seniors died from respiratory failure after recurrent fevers, a nurse at Wuhan Social Welfare Institute told Caixin. She said the facility’s infirmary didn’t have Covid-19 testing capability and many medical workers have had fever symptoms. The facility recently arranged chest CT scans at a nearby hospital for residents and staff. A scan report the nurse showed a Caixin reporter states that the patient has multiple patchy ground-glass shadows in the lungs, similar to many confirmed Covid-19 cases.

Unexplained deaths from lung ailments among the elderly at the Wuhan Social Welfare Institute and similar facilities suggest that nursing homes may be another blind spot as the government’s epidemic-fighting efforts have focused on hospitals and other communities. Last week it came to light that Chinese prisons reported more than 500 previously uncounted Covid-19 cases among guards and inmates.

At least two other nursing homes in Wuhan also recorded deaths either possibly from the virus or confirmed cases. A family member of an 85-year-old resident at Gu Tian Rong Ji Nursing Center told Caixin his mother died at the nursing home and the family suspected she was infected by a care worker. The head of the nursing home acknowledged that one of the caregivers was confirmed with the coronavirus but denied that the deceased resident was infected by the worker.

Another community senior care center with about 40 residents also found eight tested positive for the virus. The rest of the residents and staff are quarantined at the center and no visitors are allowed, a community worker said.

The Wuhan Civil Affairs Bureau disputed the report about the Wuhan Social Welfare Institute Friday night through the government’s official WeChat account, saying the facility checked its residents and staff and found that 11 seniors tested positive for the virus and one of them died while being transferred to a hospital.

According to the government response, the welfare facility started testing residents and staff Feb. 11, although Caixin learned from sources that multiple seniors died between late December and Feb. 19 after showing virus symptoms such as fever, breathing difficulty and loss of appetite.

After Wuhan tightened quarantine measures to restrict people from leaving their homes and to send the sick into makeshift quarantine quarters, many people lost contact with elderly family members in nursing homes. Family members of people in nursing homes say they have been trying to find out how many residents may be infected, where the elderly are quarantined, whether there are caregivers, what test results show and whether the government can send more medical and care staff to institutions.

A list of the dead at the social welfare facility obtained by Caixin showed 15 fatalities between Dec. 23 and Feb. 11 and four more Feb. 18. Of the total of 19 fatalities, only the death of an 83-year-old male Feb. 15 was clearly linked to Covid-19. Eight others were attributed to infections, including six to lung infections and two deaths from shock caused by infection. The remaining 10 fatalities were reportedly from other causes, and five of them took place before Feb. 11 when the nursing home started testing for Covid-19.

The nursing home never before had so many deaths in such a short time, according to a staff member who has worked there many years. Except for one 27-year-old female with cholecystitis, all of the 18 others on the fatalities list were in their 80s and 90s and most had diabetes, high blood pressure, stroke or disabilities, according to the list.

The facility, just a few hundred yards from the seafood market that may have been the starting point of the outbreak, is a combination senior hospital and nursing home. It is home to 458 senior residents with 190 staff, 21 property management personnel and eight care workers. The facility has been sealed off since Jan. 21 as local authorities stepped up efforts to contain the outbreak. All staff have been asked to stay in the facility.

A doctor in the welfare facility’s infirmary said he participated in the treatment of a patient in late December who had a fever as high as 107.6 degrees Fahrenheit (42 degrees Celsius). The patient died from septic shock possibly caused by infection, but the cause of infection was unknown because no virus check was done, according to the doctor, who was later confirmed infected with Covid-19 himself.

A care worker said more than 10 seniors died during the Lunar New Year holiday. At first, they had fever and lost appetite. Those with recurrent fevers were transferred to quarantine rooms but died after a couple of days, the worker said.

“Since they were never confirmed with tests, we don’t know whether they died from the virus,” the worker said. “But before the outbreak, even though many of the seniors at the nursing home have chronic diseases, we have never seen so many deaths in such a short time.”

A family member with the last name Zhu said he was told his 92-year-old father died from a heart attack Feb. 11 in the infirmary. The nursing home called the son Feb. 9, telling him to take his father to a hospital because he had a fever of 103 degrees Fahrenheit. As the son had a fever himself and his community was locked down, he couldn’t come to the nursing home.

Some family members of deceased seniors told Caixin that the nursing home didn’t take sufficient protective measures and residents were not even asked to wear masks.

The doctor at the infirmary said the nursing home wasn’t sealed off until Jan. 21, when the outbreak was already spreading quickly in the city. Because it was close to the Lunar New Year, there were many visitors at the nursing home every day. It hasn’t been ruled out that visiting family members might have brought the virus into the nursing home, the doctor said.

A medical worker at the nursing home said it’s also difficult to implement quarantine measures because of staff shortages and residents with dementia.

Hubei Vice Governor Wan Yong emphasized Saturday on a video conference that nursing homes face severe situations as the elderly are at high risk of infection. The Wuhan Civil Affairs Bureau said Friday that it aimed to finish screening tests on every person in nursing facilities that have found confirmed or suspected vases by Saturday and will finish tests in all other nursing facilities by Feb. 28.