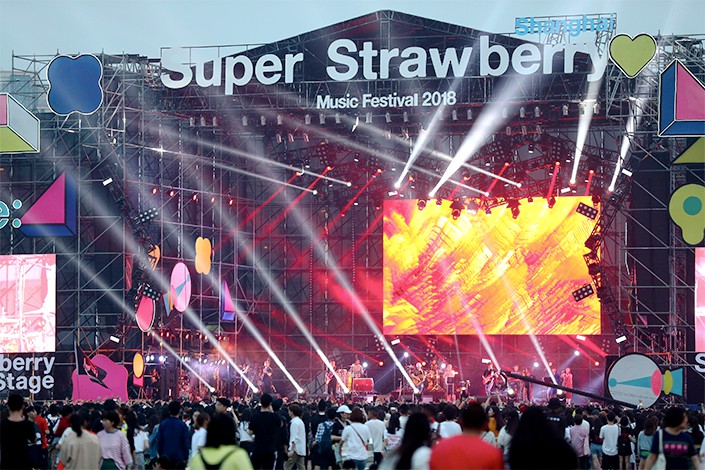 Fans gather at the Strawberry Music Festival in Shanghai in May 2018. Photo: IC Photo

Live music across China has been put on pause amid the ongoing coronavirus epidemic, with events all the way from national festival tours down to local club gigs cancelled, so amid this enforced silence, one of China’s biggest independent record labels is exploring the potential of livestreaming events.

The Strawberry Music Festival, an 11-year-old touring event attended by hundreds of thousands of people every year, will postpone all of its shows originally scheduled for the first half of 2020 until the latter half of the year. Around half of the 20 shows planned in different cities this year were set to take place in the first six months.

“Wuhan has always been our first stop each year. If circumstances allow, there will be one (in Wuhan) this year too,” said Shen Yue, vice president of Modern Sky Entertainment Co. Ltd., the record label behind Strawberry.

Postponing shows has had a big impact on the company’s cash flow. Shen said that venues, regulatory approval and artist schedules had all already been arranged for the shows and all expenses have been paid, but it’s now unclear when the planned income will actually arrive.

Some events have simply had to be cancelled altogether, particularly those involving artists from overseas with busy schedules. Japan’s The Novembers and American icons the Pixies both cancelled their spring China tours and have begun refunding tickets. Modern Sky said it took two years to prepare for the Pixies tour.

But the current setbacks may have a silver lining, said Shen. “There are things that we were not able to achieve through offline channels that we now have the time and opportunities to work on. We have harvested what we did not achieve before,” he said.

This month, as huge swathes of the country simply stayed home on government orders, Modern Sky has put live music online, working with livestreaming platforms such as Bilibili, Kuaishou, and ByteDance’s Watermelon Video.

Its co-production with Bilibili in the first week of February, put together in less than three days, attracted more than 1 million viewers and Modern Sky’s account on the livestreaming platform gained 100,000 new followers.

But its success led to other platforms seeking out similar cooperation. The second event, produced with ByteDance, the company behind the wildly popular TikTok short-video app, attracted 1 million views in the first hour and is set to showcase 82 acts until the end of the month.

Shen said the exact costs of the event hasn’t been calculated, but the ByteDance cooperation is likely to break even or even turn a small profit.

Shen sees this as a model with major potential and thinks these online music events are not just for the current, unusual set of circumstances, but will continue after the outbreak ends.

“Though we didn’t want this, it’s also an opportunity for the industry. The epidemic has brought some turbulence, but also some adjustments in the format and potential (of music festivals)” he said. “We are now able to take a moment and think, maybe that would reshape the face of this industry.”

Besides festivals, other kinds of music events are also setting up shop in cyberspace amid the new coronavirus outbreak.

Shanghai bar Taxx and Beijing night club One Third for instance tried livestreaming versions of clubbing, dubbed “cloud-clubbing,” on ByteDance’s Douyin, the Chinese version of TikTok. Each reported millions of views, with Taxx saying it took in 700,000 yuan ($99,455) and One Third reporting 2 million yuan in revenue on the first day.