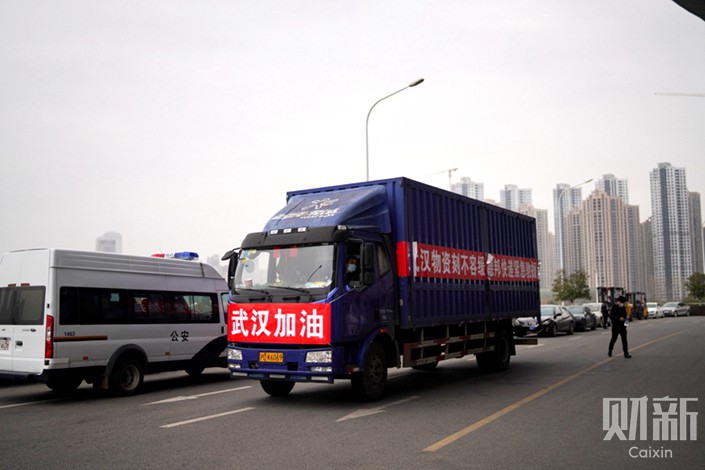 A truck carrying donations arrives in Wuhan on Feb. 2. The sign on the front of the truck reads "Come on Wuhan." Photo: Ding Gang/Caixin

Hours after Wuhan went into an unprecedented lockdown on Jan. 23, a former dentist sprung into action.

Hao Nan posted an ad online at 5 a.m. calling for volunteers to help launch a home quarantine program in the city for confirmed and suspected Covid-19 patients.

Hao and his team at the Zhuoming Disaster Information Service Center, which he founded in the wake of the 2008 Wenchuan earthquake, received nearly 2,000 applications, from which they selected 200 doctors as well as social workers and psychotherapists. Those volunteers manned an online support network that provided medical and quarantine guidance for people who couldn’t find a place in the city’s overwhelmed hospitals, and helped critically sick people contact medical institutions.

As healthcare systems, particularly in Wuhan and surrounding Hubei province, have been swamped amid the new coronavirus outbreak, civil society organizations like the Zhuoming Center, private businesses, and individual volunteers have played a critical role in filling the gaps: helping with supply shortages, supporting patients and doctors, reaching out to neglected people, and generally keeping the wheels of society spinning.

Do what the government can’t

From the very beginning of the crisis, the alumni association of the China Europe International Business School (CEIBS), a Shanghai-based executive MBA program provider, made its principles clear: do what the government can’t; don’t create more problems; and do not snap up domestic supplies. They partnered with conglomerate Fosun International Ltd., whose chairman Guo Guangchang is a CEIBS alumnus.

Shortly after the Huoshenshan Hospital, one of two makeshift hospitals built rapidly in Wuhan, started accepting patients, its roof was damaged in a storm. After the construction firm behind the hospital said it urgently needed N95 masks for the workers repairing the roof, the CEIBS alumni association flew masks to the hospital the next day via helicopter.

Though the government’s support has focused on Wuhan, the city with two-thirds of Hubei’s cases, other cities in the hardest-hit province are also struggling. But private donations are helping keep their heads above water. “Without their donation, our hospital could have been totally wiped out by the infection,” a nurse at a county-level hospital in Hubei said.

Gu Dian, an English teacher turned career coach, recruited more than 60 volunteers to acquire supplies for hospitals. He said at first he just wanted to donate masks himself, but after speaking to some doctors and learning about community workers moving corpses without protective gear, he realized more had to be done.

“There are too many fish stranded on the beach. We just want to rescue one more fish, and another, and another,” a member of Gu’s team said.

There are several challenges that need to be surmounted by these private donors. Most domestically-made protective gear is being requisitioned by the government, overseas inventories are being rapidly depleted, international couriers are cutting their number of deliveries to China, and some countries are restricting medical exports in anticipation of a wider pandemic.

Gu’s team has worked up a plan to address these problems -- from sourcing global suppliers, prioritizing the equipment most in need, clearing customs quickly, to surmounting logistical hurdles.

“To get the donations into the hands of the needy, we are doing this as if we are running a startup,” said Xiao Lin (pseudonym), a volunteer at Wuhan University’s alumni association. In Xiao’s 100-strong team of alumni, a few doctors make lists of what should be bought, business owners are making purchases and arranging deliveries, and local volunteers are providing on-the-ground support. It’s not easy to get things where they are needed, said Xiao, adding, “We are constantly trying to work out who we need to find next to get through the next step in the logistic chain.”

Saving lives is the priority

Yaya (pseudonym) is one of a team of nearly 2,000 volunteers helping unhospitalized sick people in Hubei.

She said her team has collected more than 40,000 requests from people in critical condition and submitted the requests to a central government supervisory group. As there are few available beds, volunteers are put in the hard position of deciding which requests should get priority. At first, the top of the list was cases in which whole families had been infected or parents had died, leaving orphans behind, Yaya said. But it’s hard to choose which cases are the most severe, and many people not chosen at first later worsened.

“At first, everybody wanted to help as many as possible, but there were just too many people that needed help,” Yaya said, “A lot of volunteers are on the verge of breakdown. I tell them, ‘You have to be strong so that you can help more people.’”

Hao’s organization, Zhuoming Center, launched an online clinic for coronavirus patients. “When frontline hospitals don’t have enough resources to save everyone, we are here to help,” Hao said. The main task of the center’s 200 volunteer doctors is to screen patients, send those with mild symptoms into quarantine at home, and identify patients in severe condition and help them find a hospital bed.

Hao recalled a case in which members of a family of three were all infected. In her last call, the daughter told Hao that no more help was needed because her dad had unplugged her mother’s oxygen machine as he didn’t want to see her suffer any more. Four days after the mother died, he was admitted to hospital, but died three days later. Hao cried after hearing the news.

The center also helps patients with other serious diseases, who are at risk of being overlooked as the medical system focuses on getting the virus outbreak under control. The center helps find hospitals that can still provide chemotherapy and emergency surgeries.

Chen Yiyi, a 23-year-old Chinese student in Australia, launched an online group on Feb. 11 to collect information about non-coronavirus patients in severe condition. Within a week, the online group received requests for help from 167 patients, mostly those suffering from organ failure or emergency conditions such as cerebral hemorrhage. The group eventually helped about one-third to find hospitals, but six died while waiting for help. Chen’s efforts helped bring official attention to the issue, with the Wuhan government announcing on Feb. 16 that several emergency rooms would be set aside for non-coronavirus patients.

From N95 masks to oxygen machines, from portable heaters to menstrual pads, from fixing broken spectacles to replacing cellphone screens, so much of what frontline workers need, big or small, is provided by volunteers.

As a nation’s governance is modernized, allowing diversified participants is a must, said Li Hong, director general of One Foundation, a charity organization founded by Chinese movie star Jet Li. When a disaster hits that goes beyond the government’s capacity, the benefit of civil society is demonstrated, Li said.

One takeaway from this outbreak is that civil society groups should be given more room to play their role, said Deng Guosheng, deputy director of the Institute for Philanthropy of Tsinghua University. The next step should be strengthening coordination between the government and civil society, he said.

Government officials in Hubei and some other provinces have shown a lack of awareness of private players’ role in society, and have failed to adequately guide them, Deng said. There is still a lot of work for social organizations and civil society groups to do in the ongoing epidemic, and this will continue into post-disaster reconstruction, he said.