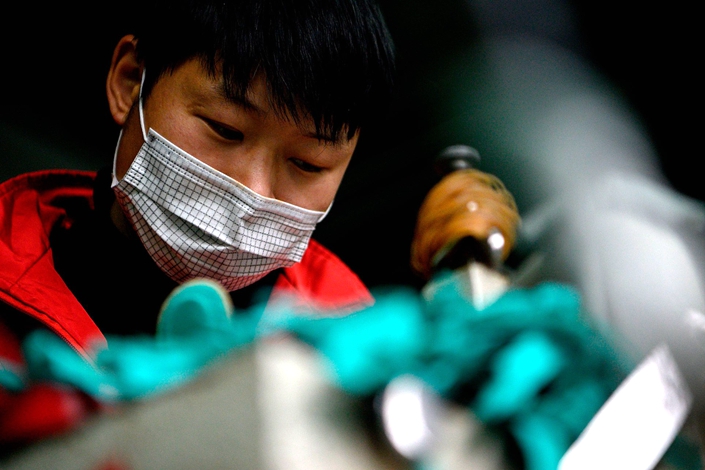 A worker wears a face mask as he makes insoles a factory in Wenzhou, Zhejiang province, on Feb. 27. Photo: Bloomberg

Qualified small- and medium-sized businesses nationwide with principal or interest due between Jan. 25 and June 30 can apply for a delay to the end of the second quarter, the China Banking and Insurance Regulatory said in a joint statement with the central bank on Sunday. In Hubei province, the center of the outbreak, the waiver applies to all companies, including large firms, according to the statement.

Chinese banks are taking extraordinary steps to avoid recognizing bad loans, seeking to protect themselves and cash-strapped borrowers from the economic fallout of the epidemic, as Bloomberg News reported last week. Regulators told lenders not to downgrade loans with missed payments or report delinquencies to the country’s centralized credit-scoring system before the end of June, according to the statement.

The push by banks and regulators to ease the wave of debt going bad is part of a broader effort by President Xi Jinping’s government to shore up the Chinese economy, which some forecasters predict may suffer a rare quarter-on-quarter contraction to start 2020. Gross domestic product may shrink by 2.5% in the first quarter, Nomura Holdings Inc. economists led by Lu Ting said in a report on Saturday, after the country’s manufacturing sector reported record-low activity in February.

In addition to pumping billions of yuan into the banking system to make it easier for lenders to extend credit, authorities have cut interest rates, reduced taxes and pledged to adopt more “proactive” fiscal policies.

S&P Global estimated last month that a prolonged health emergency could cause China’s non-performing loan ratio to more than triple to about 6.3%, amounting to an increase of 5.6 trillion yuan ($800 billion) in bad debt. With the loosening bad loan recognition standards, the ratings agency expected “questionable” loans to may peak at 11.5% of the GDP in the aftermath of the epidemic.

Shares of Chinese banks rallied. Industrial & Commercial Bank of China Ltd. and China Construction Bank Corp. both gained as much as 1.9% as of 10:36 a.m. in Hong Kong.

Still, the banking regulator said lenders need to categorize loans as non-performing should the borrower fail to repay after resuming operations for a certain period of time, according to the statement. It also urged banks to cut the average financing costs to small businesses in Hubei province by more than 1 percentage point this year.