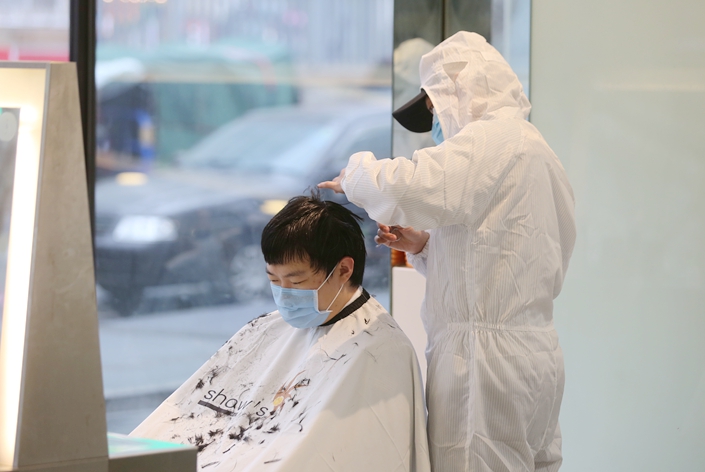 A barber in a protective suit gives a customer a haircut in Nanjing, East China’s Jiangsu province, as many businesses in China's services sector reopen. Photo: IC Photo

As the deadly new coronavirus epidemic continues to severely impact China’s economy, governments at all levels have released a flurry of rescue policies. Right now, it is important that we follow them to the letter.

Even more importantly, we must view this outbreak as a warning to resolve some fundamental problems that Chinese businesses have been facing for quite some time. These include excessive tax burdens, high and inequitable social insurance payments, and the high difficulty — and expense — of fundraising. Only by straightening out these issues can we restore stability and reach our social and economic development targets.

Since the end of January, companies have seen their normal production and operations take a huge hit from stringent disease control measures and delays to the nationwide return to work following the Lunar New Year holiday. The accommodation, catering, entertainment, transportation, and travel sectors, as well as self-employed workers and small and midsized businesses, have been affected particularly badly.

Consequently, authorities around the country have issued a number of temporary remedial policies, supported by overarching measures from the central government in Beijing. On Feb. 18, the Standing Committee of the State Council — China’s cabinet — committed to stage-by-stage reductions and remissions of corporate social insurance payments and eased the policy of corporate payments into employees’ housing funds.

On Tuesday, the Standing Committee went even further by officially encouraging financial institutions to grant temporarily extensions to indebted micro-, small, and midsize enterprises and adding new loans at preferential interest rates. At the same meeting, officials also pledged additional support for self-employed workers. Other government departments and commissions, as well as disease-stricken Hubei province, have built on these policies to issue more detailed remedial measures of their own.

Though it’s all well and good to issue such policies, the key issue is how to effectively carry them out. Note that the majority of the aforementioned measures are designed to be temporary or enacted in phases. In some cases, businesses need to ask for approval, policies will only last until May or June, or measures are merely extensions or deferrals on payments that might still have to be made before companies have fully returned to normal production levels.

In addition, although the decision to ease corporate social insurance payments is well-intended, many businesses, especially smaller ones, don’t have wide coverage in the first place, making them unlikely to benefit dramatically from the new policy. As the epidemic’s future progress remains uncertain, the effects of these rescue policies remain to be seen. But we mustn’t be scared of tweaking or strengthening them where necessary.

It must be said that the problems faced by micro-, small, and midsized businesses didn’t start with the coronavirus. Rather, the epidemic has simply thrown them into sharper relief. For a long time, companies have borne heavy tax and social insurance burdens, while smaller enterprises have found fundraising particularly challenging.

In recent years, the central government has promoted a reform designed to cut bureaucracy and open up space for tax and fees reductions, thereby making continuous progress to structural reforms on the financial supply side. However, it has been unable to root out certain systemic and mechanism issues, and amid growing downward pressure on the Chinese economy, policymakers are frequently caught up in seemingly intractable issues.

Now, the coronavirus epidemic has thoroughly exposed those issues. Further cutting taxes and fees only adds to the country’s fiscal problems, while lightening the burden of social insurance payments risks the very sustainability of the country’s social insurance system. At the root of it lie the years-long discussions about reform in several sectors, few of which have translated into real action.

We cannot keep kicking the can farther down the road: It has become plainly obvious that some systems require overall, structural change. We hope that the epidemic can spur policymakers to act decisively and accomplish what they’ve long said they will do.

Most remedial policies thus far are based on short-term considerations, but they portend the future focus of Chinese reforms. Government agencies must watch carefully to see which policies, after further appraisal and improvement, can be made long-lasting and systemic. Of those, we must place particular emphasis on reforms to finance, taxes and fees, and the social insurance system.

Financial reform must continue to focus on resolving the difficulty and expense of fundraising for micro-, small, and midsized companies. Some of the already-announced rescue measures contain support for inclusive finance, something that has the most potential for long-term action.

In the future, we must deepen our reform of supervisory systems and mechanisms, actively guide financial institutions to return to their origins, and better satisfy the needs of the real economy. We must allocate more capital resources to the key development areas and weak links of our economy and society. Whether or not we can eradicate our financial system’s prevailing discrimination against private enterprise and small businesses will be a key litmus test for the effectiveness of reforms.

We must also deepen tax and fees reform by continuing VAT cuts, streamlining the tax system, and easing the tax burden on businesses. In addition, scholars have argued that consumption tax should play a more prominent role in the ongoing shift from a manufacturing- to a service-based economy, and can do so by being viewed as a category of local tax.

Social insurance reform is increasingly becoming a point of contradiction in many societies and economies. On Feb. 14, China’s central government passed a plan heralding changes to the country’s basic pension system. Although this plan has not yet been formally announced, it will undoubtedly be an important step for social insurance reform.

Recently, the former head of China’s central bank, Zhou Xiaochuan, wrote in these pages: “We must analyze, measure and discuss (social insurance reform) from many different angles and pay particular attention to incentives in all areas in order to make bold and effective reforms.” He reminds us that “we must rapidly carry out pension reform, because it might only get harder the longer we leave it.”

That latter sentiment might as well apply to the problems inherent in China’s overall reforms. Apart from long-held issues of vested interests, the reason why we have put off these reforms is because recognizing the problems and forming a consensus around resolving them is tough, and policymakers therefore lack the determination to take the steps required to fix them.

It is extremely surprising that while China’s social and economic problems worsen by the day, leaving businesses and individuals to shoulder ever-greater costs, some government departments airily announce important breakthroughs in reform or even claim that they’ve already delivered their entire reform agendas. In exactly the same way that stifling information cannot check the spread of an epidemic, reforms enacted “on paper” cannot effectively make things easier for businesses.

Right now, what we need more than giving business-supporting policies a proper rollout is to advance disease control and economic and social development. We must consider the predicament of businesses from a long-term perspective and promote the relevant reforms. To rescue our companies, we must embrace root-and-branch reforms, not just a little pruning around the edges. That’s the only way to stabilize expectations and restore companies’ confidence.