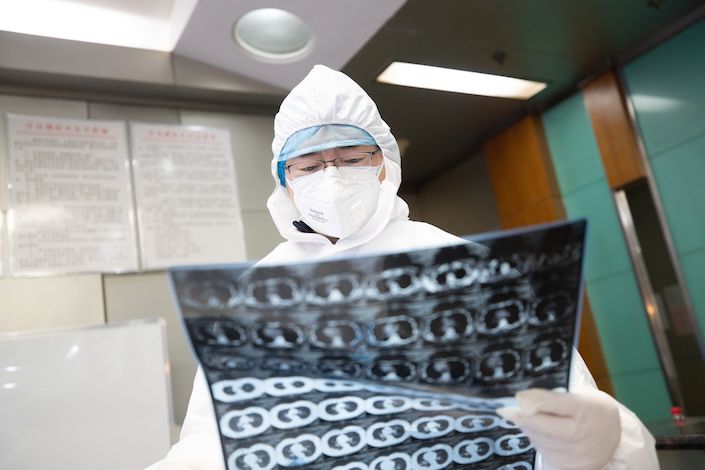 A doctor examines the chest scan results of a Covid-19 patient. Photo: Caixin

Tianjin found two more people who tested positive again for the Covid-19 virus after they recovered and were discharged from hospitals. The cases appeared after the northern Chinese city reported no new cases for four consecutive days.

Recovered patients tested positive again in several provinces, raising concerns that the outbreak could gain ground again following days of declines in new infections in most parts of China.

About 14% of patients who recovered from the novel coronavirus and were discharged from hospitals in southern Guangdong province tested positive again in later checkups, local health authority disclosed Feb. 25. Similar cases were reported in Sichuan, Hubei and Hunan.

There is no clear consensus on this phenomenon or whether such patients could still be infectious. Experts said the positive tests could be because the patients’ lung inflammation was still in the process of absorption, so there may be intermittent detoxification.

One of the two Tianjin patients is a 47-year-old employee of the local high-speed railway, where a cluster of employees and family members were infected in late January. The second was infected during family gatherings in February. Tianjin previously reported three other cases of resurgence, one of which tested negative later and was discharged again.

A recent research paper also found four recovered patients, all medical workers infected during their work, who repeatedly tested positive, suggesting the epidemic may be harder to eradicate than previously thought. These patients’ family members were not found to be infected, but it could because they are medical professionals and have taken extra precautions at home, according to the study, led by radiologist Xu Haibo at Zhongnan Hospital of Wuhan University and published Feb. 25 in The Journal of the American Medical Association.

Recovered patients who test positive again are suggested to have another test in 24 hours. If both results are positive, the patients should be hospitalized. There could be various reasons for repeated positive results, said Zhong Nanshan, a leading authority on respiratory health who came to public prominence for his role in fighting SARS.

“Now the key question is not whether one could get infected again, but whether he/she could be contagious to others,” Zhong said.

A coronavirus researcher said a positive swab test suggests a patient should still be contagious. The sample a swab collects is basically droplets, which could get out of a person’s throat and are certainly infectious, the researcher said.

Zhong said some of the cases could be residue virus presence in stool or intestines, and whether they are contagious still needs to be observed.

Meanwhile, as the country gradually resumes social and business activities after a month-long suspension, a resurgence of new infections may appear, warned Zeng Guang, chief epidemiologist of the China Center for Disease Control and Prevention and a senior expert at the National Health Commission.

Factories, schools and hospitals are the most vulnerable places, Zeng said Sunday in an interview.

“I do not dare to be too optimistic at this moment,” Zeng said.

Bruce Aylward, an assistant director-general of the World Health Organization, also warned Monday in Beijing that the outbreak could gain ground again as schools reopen and work resumes.