In Depth: The Maddening Mystery of Defeating the Covid-19 Epidemic 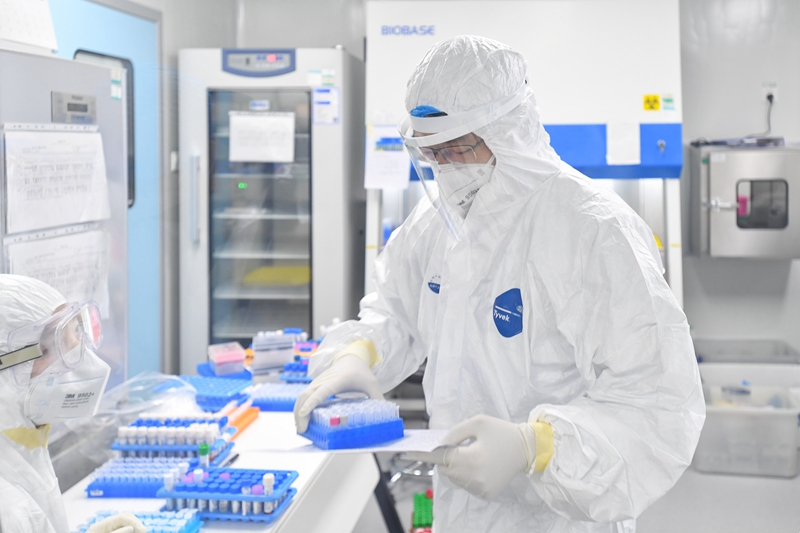 Doctors and scientists still face many unsolved puzzles about the highly infectious Covid-19 coronavirus, even after fighting it for more than two months. The disease has spread around the world, claiming almost 3,000 lives.

Scientists sequenced the new virus and captured its detailed image shortly after the outbreak, identifying it as a new strain of coronavirus similar to SARS and MERS. But many distinctive features make the new pathogen more unpredictable than its deadly relatives and harder to control.

The epidemic, which is believed to have started in central China’s Wuhan around early December, has spread exponentially to 61 countries, affecting more than 86,000 people as of Sunday. But identifying virus carriers quickly and accurately remains a challenge because of the unreliability of existing tests. Complicating the situation is the large number of asymptomatic patients and recovered patients who might still carry the virus.

Doctors and researchers are also struggling to find effective therapies. A recent study by the Chinese Center for Disease Control and Prevention (China CDC) found that the overall mortality rate of Covid-19 is about 2.3%. Although the new virus is fatal less often than SARS at 9.6% and MERS at 34.4%, it has caused many more deaths because of the larger numbers of people infected.

The disease is also much more lethal among patients whose conditions turn critical, as it often triggers respiratory failure, multiple organ dysfunction or septic shock. The fatality rate for patients with severe conditions amounted to 49%, the China CDC study found.

Pharmaceutical companies in China and abroad are racing to test existing and new drugs for the illness, but no therapy has been confirmed as effective.

“There is no magic medicine yet,” said Zhang Wenhong, an infectious disease doctor who leads Shanghai’s coronavirus expert team. “The only effective cure is to use all medical resources to keep patients alive.”

A long-term solution would be creating a vaccine. Several epidemiologists including Walter Ian Lipkin, the director of the Center for Infection and Immunity at Columbia University in New York, have predicted that Covid-19 is likely to become a reoccurring seasonal disease that lives with humans, underlying the importance of developing a vaccine.

A number of research institutions have speeded up vaccine development for the new virus, but the rollout of a new vaccine will take months or even years and will require significant, ongoing investments.

“Although drugs and vaccines may not be available in the short term, this epidemic warns us once again that research should never stop,” said Ding Sheng, director of the School of Pharmaceutical Sciences at Tsinghua University in Beijing. “Humans and pathogens coexist. As germs are constantly evolving, the struggle between humans and diseases will never stop.”

A painful lesson in the early battle against the coronavirus at the epicenter Wuhan was the failure to detect early patients and place them under proper observation, partly because the city’s medical facilities were overwhelmed by an influx of patients, experts said.

The situation has changed as more makeshift hospitals were built for patients with mild symptoms. But concerns about missed diagnoses linger because of questions about the accuracy of the mainstream test used for confirming cases.

Health officials have recommended nucleic acid tests (NATs) as the main method to confirm the presence of the coronavirus in humans due to its low cost and quick results. The technology involves collecting samples from patients and testing them for specific kinds of molecules that appear in the genetic material of the new coronavirus.

But there is growing concern that the tests are producing large numbers of false negatives. In an interview with Chinese state broadcaster CCTV in early February, Wang Chen, an expert in critical diseases and director of the Chinese Academy of Medical Sciences, said one characteristic of the virus was that “not all of those infected by it return positive NATs.”

Hu Bijie, an infectious disease expert in Shanghai, said the accuracy of NATs might be affected by multiple factors including the sample’s quality, the lab technician’s methods and the test kit’s sensitivity.

After a severe shortage of test kits in the early days, Chinese officials simplified the approval process to allow more manufactures to develop and produce test kits quickly to meet the surging demand for virus tests. But the shortened reviews also give room for approval of some incompetent products, experts said.

A study published by the medical journal Chongqing Medicine in early February found that some test kits available on the market could miss as many as 50% of cases.

Gene sequencing is another major method for confirming coronavirus infections. But while gene sequencing is comparatively accurate, it is also expensive and time-consuming and requires special facilities that not all hospitals have.

NATs often take a day or two to show results. But some novel testing methods based on antibody detection can diagnose an infection in 15 minutes. By reading people’s immunoglobulin, the new testing methods could better detect early infections and asymptomatic patients, experts said.

China's Ministry of Science and Technology solicited research projects for rapid test kits between Feb. 8 and Feb. 13. Caixin learned that around 300 projects were registered with the ministry. Traditionally, virus test-kit development takes at least two years for research and development, clinical trials and regulatory approval. Amid the urgent demand, the ministry said selected projects would win approval within a month and half.

But how reliable they are remains a question. Several doctors in Wuhan said they could only “take a try” of the new test methods. At the current stage, NATs are still the most trusted measure for confirming Covid-19 infection, several experts said.

Some puzzling features of the novel coronavirus make it a cunning enemy. One that threatens disease-control efforts is that it seems to infect certain people without causing clear symptoms.

It is unknown how large the group of asymptomatic patients could be because of a lack of official statistics. But a study published Feb. 17 by China CDC in the Chinese Journal of Epidemiology found that 889 out of the 72,314 patients and suspected patients studied showed few symptoms, or about 1.2% of the total.

A study by Chinese epidemiologist Shen Hongbing portrayed a different image of asymptomatic patients compared with other confirmed patients. Studies of hospitalized patients showed that elderly people, especially men, are more vulnerable to the virus. But Shen’s team found that young women with an average age of 32.5 account for a major group of asymptomatic patients.

With slight or even no pneumonia-like symptoms, some patients showed lung infections in CT scans and some didn’t, the study found.

The key question is how could patients without clear symptoms affect others.

Unlike SARS, which is transmitted by patients with typical symptoms, Covid-19 can be spread in a more invisible way, some studies found. A paper published Feb. 19 by researchers in Guangdong and Hong Kong in The New England Journal of Medicine reported that an analysis of patient swabs found that asymptomatic patients carry the same amount of virus as ordinary mild patients, suggesting similar contagious capacity.

The findings mean the widespread practice of relying on symptom-based screening for the disease may not be effective at preventing its spread.

“If patients with slight or no symptoms cause more infections, the chain of virus spread will be more difficult to trace and stop,” said Zhang Wenhong, the Shanghai epidemiologist.

More alarmingly, a number of Covid-19 patients who have recovered and been discharged by hospitals later tested positive again, fueling fears that they were still infectious.

Experts said the reappearance of positive results in recovered patients could reflect discrepancies in samples or that the patients weren’t yet fully healthy. But there is no conclusion whether the virus detected in the recovered patients was still active and infectious.

Scientists are racing to find more effective therapies. According to a public registry of Chinese clinical trials, 271 Covid-19 drugs were ready for or already in clinical trials as of Feb. 27.

While developing new drugs may take years, researchers are now mainly focusing on repurposing existing medicines to fight the new virus. Flu and HIV medications are under study as potential Covid-19 treatments, including HIV drug lopinavir/ritonavir, antivirals remdesivir and favipiravir, and the anti-malaria medicine chloroquine phosphate.

One of the frontrunners is lopinavir/ritonavir, a combination drug sold by AbbVie Inc. as Kaletra or Aluvia, which works by preventing certain viruses from replicating and is used to treat HIV. China’s National Health Commission in late January approved its off-label use to treat the new coronavirus.

The other promising candidate is Gilead Sciences Inc.’s remdesivir, developed by the American biotech company to fight Ebola. Gilead said last week that it would start two phase three clinical trials for remdesivir to accelerate evaluation of what is expected to become the first treatment for the new coronavirus. Bruce Aylward, assistant director-general of the World Health Organization (WHO), backed remdesivir at a press conference last week in Beijing.

“There is only one drug right now that we think may have real efficacy, and that’s remdesivir,” Aylward said. The drug’s clinical trial results could be available within weeks, he said.

Studies of vaccines also accelerated. Inventing a vaccine that stops people from getting the disease by preparing their immune systems to fight it off is still one of the most effective tools, experts said.

One by one, universities, research institutes and a handful of biotech companies have announced they’re working on vaccines. But it may take a year or two to get a vaccine tried, tested and into use.

But some experts warned that as in many other epidemics, early efforts and investment in vaccines for Covid-19 may fade without reaching concrete achievements as the outbreak eases over time.

During the 2003 SARS outbreak, China invested heavily in developing vaccines, which entered human trials in 2004. But as the research was completed two years later, no follow-up efforts were made as SARS disappeared.

“There was no need to roll out (the vaccine) to the market anymore,” said Weng Xinhua, an epidemiologist who led Shanghai’s SARS control efforts.

But Ding Sheng at Tsinghua University said vaccine development often requires long-term investment, which can rely only on government support. Even when an outbreak ends, governments should continue consistent funding to encourage institutions and businesses to engage in vaccine studies so that they can be prepared for future outbreaks, Ding said.