Update: A Hong Kong Dog Tested Positive for Coronavirus, And That’s All Anyone Can Agree On 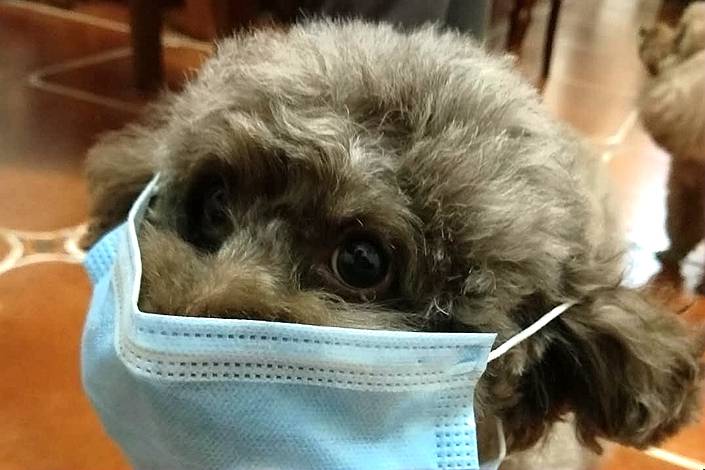 News of a dog testing positive for the Covid-19 virus has led some dog owners to put masks on their pets. Photo: Caixin

A pet Pomeranian that repeatedly tested “weak positive” for the virus that causes Covid-19 most likely got it from its owner, raising questions about whether the animal could serve as a host and infect others, or whether the traces found in its body were even viable.

Many experts who discussed the case in Hong Kong agreed the virus came from the dog’s owner, who tested positive for Covid-19, but cautioned against jumping to other conclusions. The Hong Kong Agriculture, Fisheries and Conservation Department, which first announced the case last week, also stressed that there is still no evidence to show pets can transmit the virus, adding that owners need not worry too much and should certainly not consider abandoning their animals.

The dog was tested several times, and results repeatedly showed traces of SARS-CoV-2, the virus that causes Covid-19, the department said in a statement issued late Wednesday. The dog was first tested on Feb. 26, yielding low-level positives from nose and mouth swabs, the department said. Similar tests on Feb. 28 and March 2 found the same results.

The same “weak positive” result from repeated tests based on different swabs indicated that the dog was infected rather than just showing surface contamination of virus particles spread by its owner, Dr. Thomas Sit Hon-chung, assistant director of inspection and quarantine at the AFCD, said Thursday.

“If it was contamination, the dog’s nasal or oral mechanism should have a way to clean the viruses,” Sit said. “It would not stay for that long.”

Officials in Hong Kong concluded that it was a case of “low-level infection” after consulting international experts, he said, although the blood test results are still pending.

A blood sample was taken from the dog March 3, which will be able to confirm infection by detecting antibodies. It often takes at five to seven days for the results.

A department official told Caixin the dog in question was a Pomeranian and was taken into the department’s care on Feb. 26 with none of the Covid-19 symptoms experienced by humans, such as cough, runny nose or difficulty breathing.

“Experts from the School of Public Health of The University of Hong Kong, the College of Veterinary Medicine and Life Sciences of the City University of Hong Kong and the World Organisation for Animal Health have been consulted, and unanimously agreed that these results suggest that the dog has a low-level of infection and it is likely to be a case of human-to-animal transmission,” the department said in a statement.

It added it will continue testing the dog and only return it to its owner when the results are negative. An official from the Hong Kong Centre for Health Protection previously told Caixin that the dog’s 60-year-old owner was diagnosed with the virus on Feb. 25. She started coughing on Feb. 12, was hospitalized on Feb. 24, and is now in stable condition. Her brother and sister-in-law also tested positive, though neither showed any symptoms.

The multiple weak positives showed the dog had been infected, and perhaps could serve as a potential intermediate host for cross-species transmission of the new coronavirus, Zhu Huachen, associate director of the Joint Institute of Virology at Hong Kong University told Caixin. She said the dog’s lack of symptoms showed the virus could live inside it, allowing the animal to secrete and spread the virus at the same time.

Other experts disagree. The 2003 outbreak of SARS also saw a small number of animals show low levels of that virus, but none became sick and none could spread the virus to humans, Vanessa Barrs, Chair Professor of Companion Animal Health and Disease at City University’s Jockey Club College of Veterinary Medicine and Life Sciences said on Wednesday.

Others pointed out that it’s far too early to jump to any conclusions without a blood test result, and that it’s not clear whether the viral material found in the dog was viable.

“All the (tests) tell us is that there is some genomic material from the virus that’s been detected (in the dog),” said Sanjaya Senanayake, a virus expert at the Australian National University. “So it’s not living virus necessarily, it’s not the whole virus, it’s just a little bit of virus — it could be dead virus.”

It was unclear what would happen if a dog contracted Covid-19, or what kind of symptoms it would show, Senanayake said. “But I think you would want to find live virus in the dog’s nose, throat or respiratory tract before you start saying it’s infected,” he said, adding that would require researchers to isolate the virus from a swab and grow it in the lab.

Jonathan Ball, a professor of molecular virology at the University of Nottingham, also stressed the importance of differentiating between a real infection and simply the presence of the virus, and emphasized the need not to overreact.

“I still think it’s questionable how relevant it is to the human outbreak as most of the global outbreak has been driven by human-to-human transmission,” he said. “We need to find out more, but we don’t need to panic — I doubt it could spread to another dog or a human because of the low levels of the virus. The real driver of the outbreak is humans.”

The story was updated with comments from Dr. Thomas Sit Hon-chung.