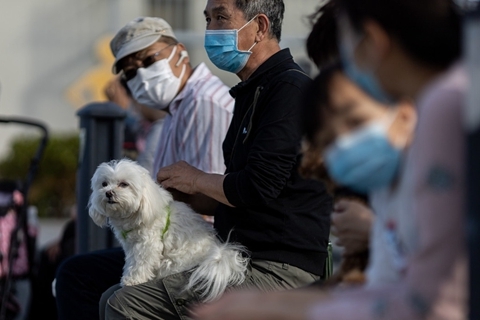 A Buddhist temple in Hong Kong has been linked to 18 cases of Covid-19 after two new cases were confirmed Wednesday, making it the center of the largest cluster of coronavirus disease in the city.

Hong Kong’s total tally of novel coronavirus infections reached 103 as of Wednesday. The city so far has reported two deaths from Covid-19 and 43 recoveries.

Twelve people who worshipped or did volunteer work at the Fook Wai Ching She temple in the North Point area have been confirmed with the virus in addition to six of their close contacts.

One of the newly added cases is the 43-year-old master of the temple, who visited Sichuan province on the mainland between Jan. 17 and 20, according to Hong Kong’s Center for Health Protection (CHP). He was put into quarantine after previous cases were reported in the temple.

The temple master exhibited no symptoms but tested positive from a throat swab Wednesday. Several previous tests on his swabs showed negative results.

Dr. Chuang Shuk-kwan, the head of the CHP’s communicable disease division, at a press conference said the monk is likely to be an asymptomatic or at a self-recovery stage so that his test results are unstable. But it is also possible that he is at an early stage of the infection, Chuang said.

The second patient confirmed Wednesday is a domestic worker for a previously infected family who worshipped in the temple, according to the CHP.

The Fook Wai Ching She temple came into the spotlight after a number of patients with links to it emerged since Feb. 23. Most of the patients visited the temple in late January and early February, according to the CHP.

The temple has been closed for investigation. Environmental samples collected Feb. 23 from several spots inside the temple ― including a cloth covering sacred texts, kneeling pads and the bathroom faucets ― tested positive, while samples from the public areas tested negative, according to the CHP.

Chuang said authorities are still tracing travel histories of patients linked to the temple but have yet to confirm a “patient zero.”

Believers gather in the temple twice a month for worship and dining together, creating opportunities for the virus to spread, Chuang said.

The temple is run by volunteers, and there is no registration system, making it difficult to track down visitors, Chuang said in an earlier press briefing.

Separately, Hong Kong’s Hospital Authority said the rate of transmission of the virus has been dropping in the city, reflecting higher awareness of hygiene and social-distancing measures.

Hong Kong also said Wednesday that it has begun evacuating residents stranded in Wuhan, chartering four flights that are expected to leave the epicenter of the outbreak on Wednesday and Thursday carrying 522 people.