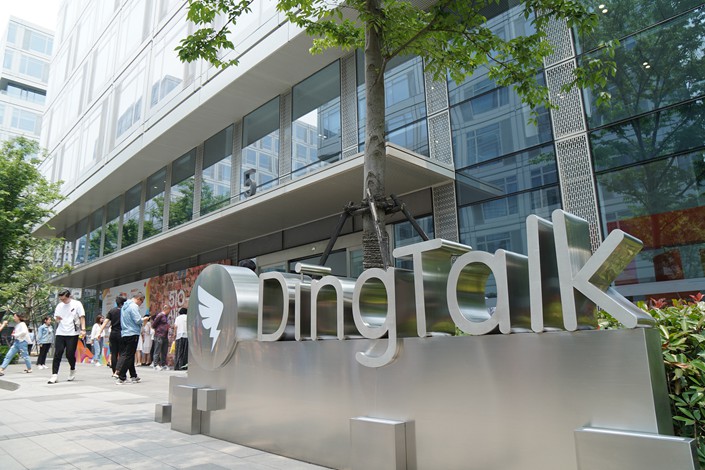 Tencent is blocking messages shared on its WeChat platform from Alibaba’s popular workplace chat app DingTalk, in the latest escalation of the rivalry between the Chinese tech giants.

The move comes days after WeChat did the same to Feishu, another Slack-like competitor developed by rival Bytedance.

As of early this week, most DingTalk links shared over WeChat were being blocked, an Alibaba spokesperson told Caixin on Tuesday. Alibaba Group Holding Ltd. filed a complaint with Tencent Holdings Ltd., but was told the restrictions “won’t be lifted,” according to the spokesperson.

Competition in the remote working space has been heating up as tech companies jostle to supply a massive spike in demand for solutions as many work from home amid the coronavirus outbreak.

Testing by Caixin found that some links shared from DingTalk got through, including news articles, but invitations, such as inviting a WeChat user to join a video conferencing event on DingTalk, had been blocked, forcing users to open them with a separate browser.

Tencent responded on Wednesday with a statement accusing DingTalk and “some third-party apps” of violating the company’s content sharing guidelines. The apps had “inappropriately taken advantage of WeChat’s relationship chain,” the statement said, “posing a threat to the privacy and security of WeChat users.”

Tencent’s targeting of DingTalk came days after ByteDance Ltd., a fast-rising social media startup known for its short-video app Tiktok, complained that links shared from its Feishu app, a competitor to Alibaba’s DingTalk, had also been blocked on WeChat.

Alibaba’s DingTalk is the undisputed work chat market leader in China, trailed by Tencent’s WeChat Work and two other relatively new competitors — Feishu, launched in 2018, and Huawei Technologies Co. Ltd.’s We Link, which launched in December.

As competition has grown increasingly cutthroat during the coronavirus outbreak amid soaring demand, Alibaba, Tencent, ByteDance and Huawei have all begun to offer more remote work services for free in a bid to attract more users.