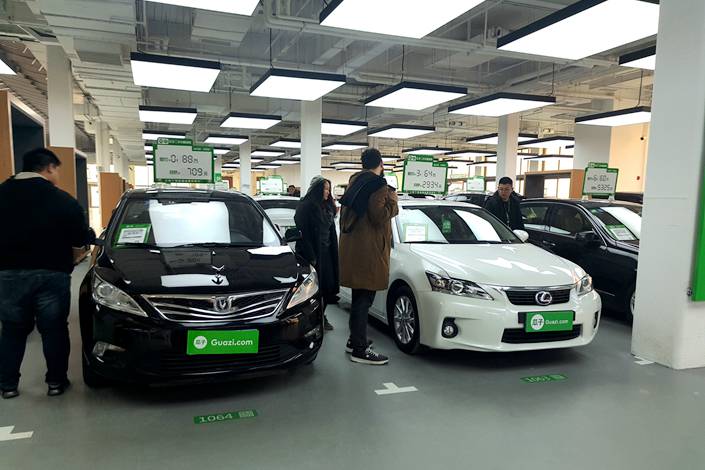 Second-hand cars for sale in Beijing on Feb. 23. Photo: VCG

China’s money-losing online used car sellers have been slashing salaries and jobs in recent weeks, operating in cash-conservation mode as business slows to a trickle during the Covid-19 outbreak.

The nation’s auto industry was already suffering through a difficult period even before the outbreak, with the market contracting for more than a year after two decades of explosive growth. But the disease has made the situation even more difficult, as many consumers stay indoors in order to avoid contracting the virus. Driving in general has also dropped sharply due to roadblocks both within and between major urban centers as part of the government’s bid to control the outbreak.

China’s already flagging new car sales plunged to a record low in February, with the China Passenger Car Association (CPCA) reporting an 80% sales slump for the month compared with a year earlier. At the its worst point, sales tumbled 96% in the first week of the month.

The period between Jan. 1 and the Lunar New Year has traditionally been a strong one for used car sales, spurred in part by promotional activities from dealers seeking to clear inventory before the most important holiday of the year. Trading in used cars totaled about 1.7 million units in December, an all-time high, boosting dealer confidence in the market. That prompted many to increase their inventories — a move most are now regretting.

While the industry has been slowly coming back to life in recent weeks, in step with China’s bigger return-to-work push, business is still far from normal levels. The China Automobile Dealers Association reported that about two-thirds of used car dealers had reopened as of March 2, with trading volume about 55.5% of ordinary levels. While still weak, those figures represented a marked 20% improvement from the week before.

In a bid to survive as their sales plunge, three top online sellers, Uxin Ltd., Chehaoduo Group and Souche Holdings Ltd., have all gone into cost-cutting mode in recent weeks, including layoffs and salary cutting.

New York-listed Uxin launched its cost reduction campaign on Feb. 15. It temporarily suspended some employees, guaranteeing their basic living expenses until their return to work. Other remaining rank-and-file workers had their salaries cut by an average of 20% to 30%, while managers and higher officials saw even bigger cuts of 40% or more, effective through the end of May. Uxin promised that suspended employees would be brought back as soon as the market improves.

Two weeks later, on Feb. 28, Chehaoduo, parent company of the Guazi.com online used car platform, announced its own cuts. Most ordinary employees saw their pay reduced by 30% and received 13 days of extra leave. High-level managers got pay cuts of 40%, and vice presidents were cut by 50% effective for the months of February and March. Previously, Yao Junhong, founder of Alibaba-backed Souche, said that his company was cutting 13% to 14% of its workforce.

The cuts paralleled similar moves seen in other sectors like travel, which are also getting hammered more than most due to lack of people out and about. This week, leading online travel agent Trip.com said in an internal memo that its top two executives would stop receiving salaries beginning this month, while other top management would also take voluntary pay cuts of up to half until the travel industry recovers.

“Compared with the 2003 SARS period, when vehicle consumption was still rising, demand for motor vehicles during this outbreak hasn’t been affected a lot,” said Shen Rong, deputy chairman of car-trading services provider New Runway. “But … since there are no offline trading venues, demand for trading has weakened, so the market is not very active.”

A Guazi employee told Caixin that a shortage of cars for sale was having a particularly dampening effect on online sales, as many sellers weren’t trading in their cars given the climate. “Right now Guazi isn’t lacking for buyers,” the employee said. “The main issue is there aren’t any cars to sell. In the past we could receive several thousand cars each day, but now it’s just a few hundred.”

Online used car dealers were already cutting expenses even before the outbreak in a bid to stem losses. Publicly traded Uxin’s performance was indicative of the tough environment even before Covid-19, as companies fought fiercely for market share and trading volume at the expense of profits. Uxin made a loss in last year’s third quarter, even though its revenue grew 33% to 461 million yuan ($38 million). It net loss for the period, 267 million yuan, was about half the figure from a year earlier.

Most of the online sellers conducted major fund-raising last year, meaning they are probably not in danger of exhausting their cash in the very near future. But the situation could be different for more traditional brick-and-mortar sellers, which are often smaller outfits with 10 or fewer employees.

One dealer said that most such players will face difficulty if their inventory exceeds 45 days’ worth of cars. Accordingly, many are planning big price cuts to clear out inventory and generate cash as people start to buy again. But the discounts, and the broader shock from the outbreak, could lead to a wave of closures by smaller players with less resources, observers said.