Business in Hubei Picks Up the Pace of Recovery From Epidemic 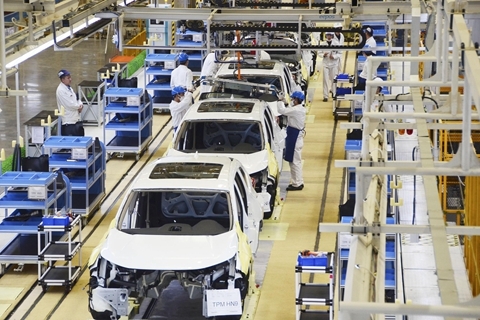 An assembly line at Dongfeng Honda in Wuhan. Photo: VCG

Chinese officials are relaxing restrictions to allow business activities to recover in many places across Hubei province, the epicenter of the Covid-19 outbreak, amid signs that the domestic spread of the disease is under control.

Qianjiang, a city of 1 million people 180 kilometers from the provincial capital Wuhan, will resume all public transportation and business operation in the “near future,” the local government said Tuesday in a statement. A city official told Caixin that companies in Qianjiang would be allowed to resume operation without obtaining official approvals.

Officials in several other Hubei cities also confirmed with Caixin that local businesses will be encouraged to resume production starting March 10 if they meet certain criteria.

People with a track record of low infection risk will also be allowed to travel within the province, the provincial disease control office said Tuesday in a separate statement.

New infections continued declining across China. As of Monday, 16 cities in Hubei, except Wuhan, reported zero increase in new infections for days. On Monday, China reported 20 new confirmed cases, the lowest number since January. Seventeen of the total were recorded in Wuhan, the city hit first and hardest by the new disease.

Chinese President Xi Jinping Tuesday paid his first visit to Wuhan since the outbreak began in December, signaling confidence in the country’s fight against the virus. Xi visited the Huoshenshan Hospital, one of the facilities built to treat Covid-19 patients, and pledged policy support to help Hubei return to normal, according to the official Xinhua News Agency.

While the outbreak will hurt Hubei’s economy in the short term, it won’t affect the long-term fundamentals of the Chinese economy, Xi was quoted by Xinhua as saying.

Wuhan, which accounts for more than 70% of infections in Hubei, has been on lockdown since Jan. 23 to contain the spread of the virus, followed by similar measures in cities across the province. Nationwide, strict travel bans and business suspensions have been in place for more than a month.

Amid signs of easing in the outbreak, less-affected regions outside Hubei have stepped up efforts to get people back to work. The outbreak caused China’s manufacturing activity in February to contract at the fastest pace in nearly 16 years with record declines in new orders, output and employment.

In Suizhou, one of the medium-risk cities, companies can start partial resumption of production in batches after March 10, according to a local official. Companies will need to submit disease prevention measures, screen employees and outline emergency response plans for regulatory approval before starting operation, the official said.

While restrictive measures remain in Wuhan, leading automaker Dongfeng Honda Automobile Co. is preparing for a partial resumption of production in suburban Wuhan March 11, a person close to the company told Caixin.

The joint venture between Dongfeng Motor Group and Honda Motor Co. won approval to resume some operations Sunday, Caixin learned. Some of the company’s suppliers were also approved to restart.

Dongfeng Honda operates three assembly plants in Wuhan, employing 12,405 people. The company previously planned to resume production Feb. 21, but that was postponed repeatedly amid the outbreak. It has yet to announce the resumption date.

Although companies in Hubei are moving toward resumption, many of them still face supply shortages and disrupted logistics. An executive of a textile plant in Xianning city said his company is struggling to get raw materials from Ximen in Fujian province.

“Drivers are unwilling to take orders to travel to Hubei,” the executive said. Logistics services inside Hubei are largely suspended, he said.

The textile company applied for resumption March 7 and is set to start operation shortly after a March 11 inspection, the executive said.