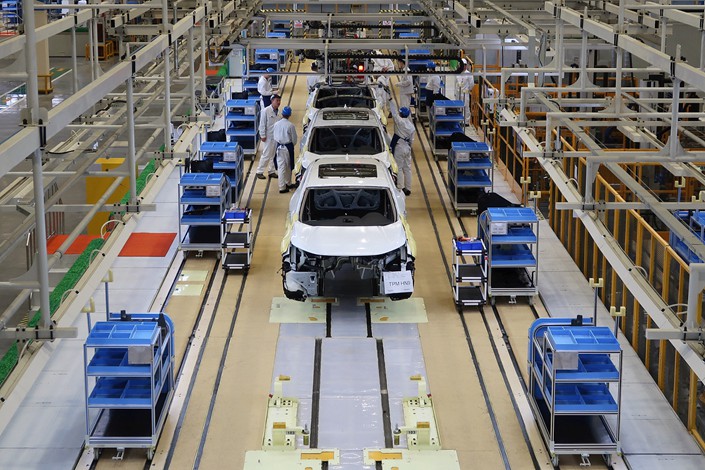 The car-making venture between Japan’s Honda Motor Co. and Dongfeng Motor Corp. resumed operations on Wednesday after shutting down for more than a month, a highly symbolic move due to the company’s location in Wuhan, the epicenter of the Covid-19 epidemic.

While much of China has been slowly getting back to work over the last few weeks after an extended Lunar New Year holiday to control the virus’s spread, Wuhan and much of surrounding Hubei province had yet to join the trend until this week. The virus is believed to have originated in Wuhan, possibly in a local seafood market that also sold wild animals. Nearly 60% of the nation’s more than 80,000 total infections have come from the city, which has been in a state of lockdown since late January.

A source at the joint venture, Dongfeng Honda Automobile Co. Ltd., confirmed to Caixin that it had partially resumed production at the massive manufacturing base. The move comes as China’s overall Covid-19 infection rate slows sharply, including in Wuhan.

The city’s disease control and prevention department met on Monday to discuss the way forward as the situation improves and decided people could begin returning to work and factories could resume operation when appropriate. As a company deemed an important part of industry supply chains, Dongfeng Honda was among the first group of companies allowed to restart.

The joint venture is the centerpiece of a massive car-making zone that the city of Wuhan hopes will transform the Central Chinese city into a major industry powerhouse. Honda alone has three factories there, and the zone is also home to Dongfeng’s headquarters, another Dongfeng joint venture with French carmaker Renault, and 500 car component makers that have also just restarted operations.

Dongfeng Honda is by far the zone’s single largest venture. It made 792,000 cars worth 135 billion yuan ($19.4 billion) in 2019, according to the economic zone’s website, accounting for about 54% of the zone’s total output. The venture employs more than 12,000 people, according to its website.

Hubei has been handling the issue of work resumption very carefully, even as companies and factories in the rest of China have resumed operations to varying degrees for several weeks now. The joint venture had previously planned to reopen several times, but delayed those plans in line with local efforts to control the virus. Its latest postponement was announced on Feb. 21, when it said it was complying with a provincial order saying work could not resume earlier than March 10.

China’s auto industry recorded its biggest decline in nearly 20 years for the months of January and February, as the virus further dampened demand that was already weakened by the nation’s economic slowdown. Dongfeng Honda was hit harder than most due to its location at the outbreak’s epicenter. The venture’s finished car sales in February totaled just 3,803 units, about 10% of the figure a year earlier.

The joint venture’s resumption of business comes as officials take similar steps across Hubei province, of which Wuhan is the capital.

An official in Qianjiang, a city of 1 million people 180 kilometers from Wuhan, told Caixin that local businesses are now being allowed to resume operation without obtaining official approvals. Officials in several other Hubei cities also confirmed with Caixin that local businesses will be encouraged to resume production starting March 10 if they meet certain criteria.