In Depth: Covid-19 Gives Robots a Chance to Shine 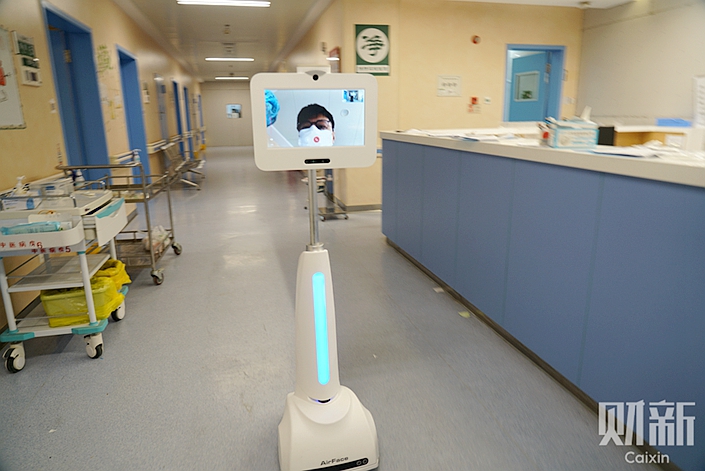 When humans fall short, how can robots fill in?

The past 50 days have provided an unexpected chance to explore the answer to that question. In hundreds of hospitals and makeshift quarantine stations in Beijing, Hubei province and Guangdong province, robots could be found delivering meals, taking temperatures, disinfecting rooms and even cooking.

After struggling to meet practical needs in the last few years, the robotics industry has been given an unprecedented chance of showcase its latest advancements during the ongoing battle against Covid-19, the illness caused by the new coronavirus.

The industry once struggled to find suitable complex scenarios in which robots could compete with human workers. However, over the first few months of 2020, hundreds of thousands of people found themselves in hospitals or quarantine centers across the country. With medical staff under stress and direct contact between people discouraged during the outbreak, robots finally got their shot.

On the evening of Jan. 25, the third day after the city of Wuhan, the epicenter of the outbreak, was put under lockdown, Shenzhen-based delivery robotics company Pudu Technology Inc. received two requests from quarantine centers in Shenzhen and Hangzhou. The centers got in touch hoping to use Pudu’s robots to deliver meals to isolation rooms. Before the epidemic, Pudu’s robots were mainly employed in restaurants, including hot pot chain Haidilao. According to Pudu’s founder and CEO Zhang Tao, quiet and orderly hospitals are actually much easier for robots to navigate than crowded restaurants.

Since then, Zhang’s company has delivered more than 200 robots in less than a month to help with efforts to contain the virus. Besides minimizing human contact and taking over repetitive tasks, which have both helped relieve pressure on staffing, using robots can also help save medical resources, Zhang said.

Medical workers have to wear protective gear when they interact with infected patients, but suits and masks have been in short supply at some points during China’s outbreak. “If you use a robot, you can conserve at least two protective suits each day,” Zhang said.

Robots have helped save such resources, not only for hospitals but also at road side checkpoints, police stations and residential communities, Zhang said.

Besides delivery robots, another Shenzhen-based industry leader, Ubtech Robotics Corp., experimented by putting three of its models in a Shenzhen hospital to take on tasks including temperature monitoring, sterilization, and artificial intelligence guidance in fever clinics.

The 3rd People’s Hospital of Shenzhen is the only hospital in the southern city designated to treat confirmed Covid-19 patients. The hospital has admitted more than 400 such patients since its first case on Jan.11. The hospital’s fever clinic receives about 100 patients on average each day and about 300 on its busiest days, according to Liu Yue, who runs the facility. To deal with that many patients, a group of two or three nurses has to make rounds every four hours. And workers have to disinfect the clinic every six to eight hours.

Liu said his medical team would be even more overloaded if they had to take the temperature of every patient manually, but with the help of robots, more than 200 people can be tested in one minute.

Even as the epidemic wanes in China, many robotics companies still see the health care industry as an opportunity because the country’s public health system will seek to upgrade itself after the outbreak ends, said Wang Bing, chairman of CloudMinds, a Beijing-based robotics company.

Wang said the future public health system may create huge demand for disinfection work at airports and on trains and subways. His company has also started to research and develop robots specifically designed to help with viral emergencies.

Meanwhile, as the rest of the world continues to grapple with the rapidly spreading virus, Ubtech’s marketing lead Lao Peifeng predicts that, unlike SARS, Covid-19 will have a long-term impact on the world. The company has received quite a few of inquiries from overseas about its products, Lao said.

One unforeseen complication to Zhang’s business has been local quarantine policies. Selling robots requires his staff to visit the places where they will be used, which during the outbreak has left them in jeopardy of being quarantined. One worker got quarantined for 14 days on a trip to a hospital in Wenzhou, Zhejiang province. In Beijing, employees have had to quarantine themselves for two weeks after returning to the city after a trip. Of the more than 200 people who work at Pudu or its partners, at least 40 have been quarantined during the outbreak.

Personnel and component shortages are another issue for the robotics industry. Shenzhen’s government allowed Ubtech’s factory in Shenzhen, which usually employs 200 workers, to resume production on Feb. 17. However, only 30 people returned to work that week. The company has estimated it would take another month to get back to pre-outbreak production levels

Inflated component prices and delays in receiving those components were other issues that have hurt robot-makers’ production capacity, said Ubtech’s Lao.

Though Lao believes the supply chain should recover sometime soon as more companies resume operations, deliveries of their robotics products — especially to overseas customers — will be the next bottleneck as they face uncertainties such as visa and logistical restrictions.

How far from scale?

One industry expert said that the current generation of robots are only really good at helping with one specific kind of work — repetitive tasks. For robots to be used on a larger scale at hospitals, their use must be incorporated into the design of the facility. After all, a virus poses no problem for a machine, but stairs do, he said.

The wider application of robotics is also restricted by their cost. “There’s no advantage in terms of cost, of course,” said the expert, noting that the price of a service robot can exceed 200,000 yuan ($28,748). By comparison, a nurse gets paid about 5,000 yuan a month.

In addition, nurses are capable of more tasks that require reasoning and judgment. They can also comfort patients, he said.

But robot-makers tend to believe that robots can be more cost effective than human for certain kinds of work. CloudMinds’ Wang suggested one robot working as a deliveryman or a security guard could replace two human workers. His company sells such robots at prices ranging from 100,000 yuan to 400,000 yuan.

Nearly 1,000 of Wang’s robots have been working in hospitals around China, including Wuhan Union Hospital and Beijing Ditan Hospital.

At this point in time, service robots can take over most fixed and repetitive jobs, Wang said.

His company’s original goal was to create a robot domestic helper. “Cooking, cleaning and doing laundry are the most difficult tasks,” he said.

He believes it will take another five to eight years for the company to achieve its goal.