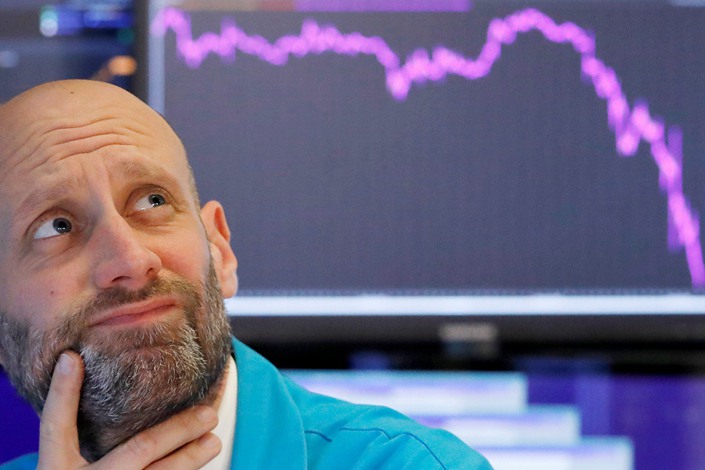 The U.S. sell-off was the worst the country has seen since Black Monday of 1987. Photo: VCG

Chinese shares opened sharply lower on the last day of the trading week after the worst U.S. sell-off in more than 30 years, but later pared their losses amid signs that markets in Europe and North America were stabilizing.

The Shanghai Composite Index opened down about 4%, following a plunge that saw the main U.S. indexes lose nearly 10% of their value on Thursday over concerns about the growing Covid-19 pandemic. Hong Kong’s benchmark Hang Seng Index opened down by more than 6%, following other major Asian markets sharply lower such as Japan and South Korea.

The U.S. sell-off was the worst the country has seen since Black Monday of 1987. Taken with earlier losses, the benchmark S&P 500 is now 27% below record levels set just three weeks ago, putting it squarely into bear territory.

But following their initial steep drop, the Chinese indexes moved steadily up through the session, and Shanghai ultimately closed down 1.23%, while the Hang Seng lost just 1.14%. The strength later in the day came amid signs that U.S. markets would end the week on a more positive note, with the Dow, S&P and Nasdaq futures indexes all up by 2.6% or more around 5:30 p.m. in Beijing.

For the week the Shanghai index was down about 5%, while Hong Kong lost about 8%.

“The market has been jolted to the point of breaking, and textbook common sense seems to no longer apply,” Nomura’s Masanari Takada wrote in a note, speaking of the U.S. meltdown. “To all appearances, investors are bracing themselves for a worst-case scenario in which the coronavirus spreads in explosive fashion and leads to a global recession, the lockdown of major urban centers across the U.S., and a severe credit crunch.”

The Thursday sell-off put U.S. markets squarely into bear territory for the first time since the global financial crisis of 2008. China’s markets have held steadier, despite the country lying at the epicenter of the global outbreak that has sickened more than 120,000 worldwide and killed more than 4,700 — the majority of those in China. But Chinese markets were some of the world’s worst performers in 2018, when the country entered its own bear market amid growing signs that its once-booming economy was rapidly slowing.

During the sell-off this week, investors may have been less bearish in Asia due to belief that local companies are better situated to weather a virus-related downturn than their Western peers, according to Jim McCafferty, joint head of Asia Pacific equity research at Nomura.

“Companies in Asia will feel the impact of the current turmoil on their businesses. This will lead to earnings downgrades and subdued investor confidence,” he said. “However, Nomura believes that Asian companies are likely to be more resilient to a global crisis than their Western counterparts. Asian companies are run conservatively. Most likely this is based on their recent experiences of exogenous shocks like the Asian Financial Crisis in 1997 and SARS in 2002-03. Against this background, Asian companies sit on large cash balances which can insulate against weak current trading.”