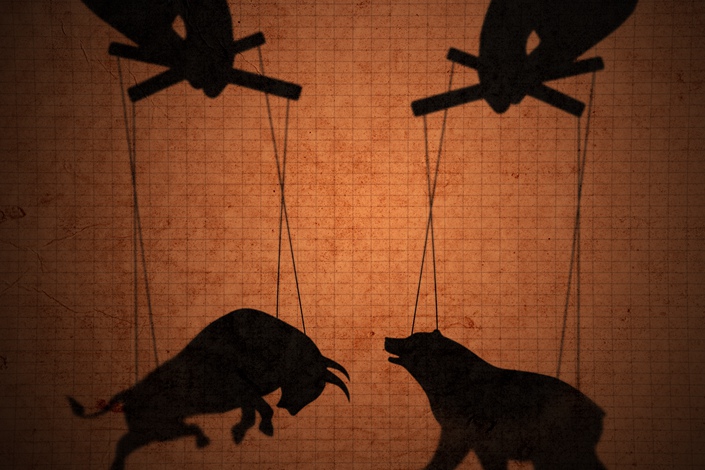 China's benchmark Shanghai Composite Index fell 1.1% on Wednesday, its third straight daily decline, which has taken its slump over the past five weeks to 13%. Photo: VCG

China stocks extended a bear market sell-off on Wednesday, with blue-chips dragging the benchmark Shanghai Composite Index to a fresh two-year low as investors continued to fret over Sino-U.S. trade tensions and a sliding yuan.

The index, which tracks the daily price performance of all A-shares and B-shares listed on the Shanghai Stock Exchange, dropped by 1.1% to 2,813.18, the third straight daily decline that has taken its slump over the past five weeks to 13%. The gauge has fallen by more than 20% since a high of 3,546.50 on Jan. 23, making it one of the worst performers among major global stock indexes in 2018.

The blue-chip CSI 300 Index of the top 300 stocks listed in Shanghai and Shenzhen slumped by 2.03% to its lowest in 13 months. The Shenzhen Component Index fell by 1.83%, while Hong Kong’s Hang Seng Index, which is heavily populated with mainland companies, slid by 1.82%.

Analysts say the recent market volatility in China has been driven by a combination of factors — trade tensions between China and the U.S., concerns over domestic corporate bond defaults, and uncertainties surrounding the growth outlook. Investors are also concerned about the potential for large volumes of shares to be dumped on the market as shareholders who have pledged their stock as collateral are forced to liquidate holdings to meet margin calls or repay loans.

Now, adding to the turbulence is the accelerating depreciation of the yuan — the Chinese currency has dropped by about 1.6% against the U.S. dollar this week and closed at a near six-month low on Wednesday.

Airline shares bore the brunt of the sell-off, as the weakening yuan will hurt companies with high levels of dollar debt, analysts said. The airlines will also have to pay more for new planes on order from foreign aircraft-makers and for their fuel, both of which are priced in dollars. China Southern Airlines Co. Ltd. dropped by 3.65% on Wednesday while Air China Ltd. closed down by 4.08%. China Southern has lost 15.9% so far this week, and is headed for its worst weekly loss since August 2015.

The yuan, which has been steadily weakening since mid-April, when it was trading at 6.2738 to the dollar, has dropped sharply since the middle of June on concerns that slowing economic growth will lead the government to ease monetary policy and that worsening trade relations with the U.S. could harm the Chinese economy.