Reporter’s Notebook: What Two Months of Reporting Has Taught Caixin About the Coronavirus 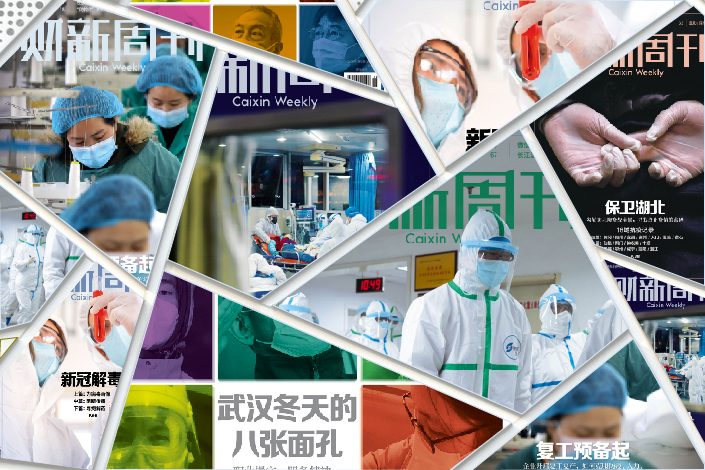 From Wuhan to all of China, Caixin Media has published six cover stories over the last month and a half in its weekly Chinese magazine. These features and investigations piece together what we have learned about the new coronavirus at various stages, detailing the shifting public health response, and the costs behind all of it.

I have translated and rewritten most of these cover stories into English. These stories offer lessons — paid for dearly both economically and socially in China — that might be of use to other countries now battling their own outbreaks.

How Wuhan Lost the Fight to Contain the Coronavirus

How Wuhan Lost Its Grip on Thousands of Suspected Coronavirus Cases

The four-part cover story was published almost 10 days after the unprecedented decision on Jan. 23 to lock down Wuhan and its 11 million inhabitants.

Confirmed cases were skyrocketing. The national mood had slipped into panic at time when people were usually immersed in celebrating the Lunar New Year holiday. Questions have persisted until today about who knew what when, and who missed the early signs that an epidemic was approaching. Since then, however, more details of the story have emerged.

It’s now clear that despite dire warnings from frontline doctors, hospital managers and city health officials implemented gag orders, forbade doctors to share information with the public and ordered biotech companies to stop testing. Authorities burdened the process of filing cases to the national contagious disease alert system with enough red-tape to render the system nearly ineffective. They also withheld critical information on person-to-person transmission of the virus when three teams of medical experts were sent from Beijing to investigate.

This delayed the response by several weeks, allowing the best window for containing the virus to close. During this period, the virus ran rampant in Wuhan and then spread around the country as people returned to their hometowns for holiday celebrations.

Slow official reaction in the early stages of a new contagious disease can occur for many reasons. It could be delayed by science — there are many unknowns about this disease — or by politics, through red tape or bureaucracy. There was also a practical problem — there were not enough testing kits and almost all Chinese manufactures were closed down for the holiday.

The best protection against missing the critical window comes from transparency, from which medical experts and policymakers, even at a time when official channels were clogged, can still pick up “soft intelligence” that can prompt swift preparation. Looking back, the regions that took precautions in the early days of the outbreak were the ones that were able to contain the virus at a considerably lower cost than their neighbors.

Three Chinese cities — Hong Kong, Shanghai and a Hubei city called Qianjiang, which neighbors the outbreak’s epicenter of Wuhan — all benefited from early precautions and their swift response to quarantine the infected and separate those suspected of being infected in order to protect the vulnerable. Their experiences are worth close examination.

But the priority then was still figuring out a way to save Wuhan, and ensuring other provinces didn’t miss their own windows for containment. One key question emerged at the time: How should we deal with the enormous number of suspected cases? The answer to that soon led to a major policy shift in Wuhan.

For the first 10 days after the city was put on lockdown, from Jan. 24 to Feb. 2, the policy was to focus on treating patients in severe or critical condition, and allow suspected cases to stay home and quarantine themselves. The city’s capacity to test people was slowly increasing, but still very limited. Many of the suspected cases were indeed infected patients, but without confirmation, they were unable to receive treatment. Access to treatment is critical when dealing with Covid-19, which develops quickly and can leave a patient in severe or critical condition in a matter of days. This early policy resulted in the collapse of the health care system and a rapidly rising death toll. Our reporter in the city described the period as 10 days of cruel natural selection.

We now know that 10% to 20% of coronavirus cases will develop into severe cases, and it is critical for these patients to be admitted to a hospital as soon as possible. The key problem with Wuhan’s early policy was home quarantining, which was required of all suspected cases at that time. It required more than 1,000 community management teams to make people in isolation stay isolated. There is a problem with this. Neither the patients or the community workers knew how to conduct home quarantine and there wasn't enough protective gear. The number of community transmissions and family clusters exploded. Consequently, with a larger denominator, the number of severe cases shot up too, overwhelming the city’s health care system.

It became incredibly difficult for even confirmed cases to get a hospital bed in Wuhan, and many patients had to wait hours just to get diagnosed. Often they would visit multiple hospitals in hopes of getting a bed. These movements exposed many more patients and medical workers to greater danger, and the number of infections in hospitals skyrocketed.

On Feb. 2, a critical decision was announced that aimed to finally get things under control. The local government decided to quarantine everyone who fell into any of four categories: infected, suspected, patients with fever (one of the most common coronavirus symptoms) and “close contact,” with the last referring to anyone who had had close contact with an infected person. The goal of the policy change was to identify all possible cases of infection and cut off the routes for possible transmission.

This decision marked a turning point in the battle against the virus.

It still took seven days after the announcement to identify and categorize patients. And that was backed up by setting up 16 makeshift hospitals that eventually held a total of 12,000 patients with light symptoms. It also required sending more than 10,000 medical workers from across China to Wuhan.

4 Suspected cases must be quarantined

Once authorities gradually got the problem of transmission under control, the effort shifted to saving lives. It was a daunting task. The rapid course of the disease means that intensive care personnel are the main force battling the virus. Caixin interviewed four leading ICU doctors. Here are a few takeaways:

1 The new virus often causes minor symptoms at the beginning, but it is more contagious than SARS. It can also cause the condition of patients to deteriorate faster.

2 It usually takes three weeks for the disease to escalate to critical condition. The second week is the watershed. “Some get through to the third week, but others won’t make it,” one doctor said.

4 The virus attacks the immune system, resulting in a drop in lymphocytes, or disease-fighting white blood cells, as well as lung damage and respiratory failure.

6 Last but not least, it’s important to cover all costs related to the virus, as otherwise patients might just give up in fear of burdening their families with huge medical bills (China waived medical costs for coronavirus patients on Jan. 23 and for suspected cases on Jan. 27.)

Hubei’s Other Cities Offer Lessons on Battling the Coronavirus

Although Wuhan has garnered global attention, there are 16 other cities in Hubei. Some suffered severely while others have offered valuable lessons. Caixin reporters visited the 16 cities and spoke with epidemic prevention officials, medical workers, patients, community staff, businessmen and local residents to sketch out a panoramic picture of the front lines.

Outside the epicenter, Shanghai was once considered one of the cities in China most vulnerable to the coronavirus because of its close economic ties with Wuhan. But the megacity of 30 million people has done better than most at managing the outbreak. A Caixin report found the city’s early, fast response featuring quick diagnoses and effective treatment helped Shanghai tackle the outbreak better than most places in China.

China’s Financial War Against the Coronavirus

The slowing increase in new cases was a sign that the outbreak was coming under control. The focus then turned to something overlooked during the early stages of the outbreak — What was the economic cost?

It is now clear that a full economic recovery will take time. Because China’s factories rely on millions of migrant workers, companies are struggling to get people back to work while limiting the risks of contagion. Some, like Foxconn, are competing for workers by offering lucrative bonuses and putting returning employees in quarantine before they are allowed to get back on the job.

Meanwhile, supply chain disruptions are holding back production. Some companies have had to stop accepting new business as global customers cancel orders. Companies face soaring costs and plunging revenue even as authorities do what they can to jump-start the economy, which was already slowing before the epidemic.

The government has taken a series of measures to cushion the economy from the outbreak, but getting everything back on track will still be a titanic challenge, especially for small and midsize companies.

In Depth: The Maddening Mystery of Defeating the Covid-19 Epidemic

This cover story focused on the many unsolved mysteries of the Covid-19 coronavirus that doctors and scientists continue to investigate, more than two months into the epidemic.

Scientists sequenced the new virus and captured detailed images of it shortly after the outbreak, identifying it as a new strain of coronavirus similar to SARS and MERS. But many distinctive features make the new pathogen more unpredictable than its deadly relatives — and harder to control.

The most urgent task for researchers is to quickly and accurately identify virus carriers, but several issues remain:

1 The virus can stay viable in the air and on surfaces.

2 Existing tests can still be unreliable, leading to false negatives.

3 There have been a large number of asymptomatic patients.

4 Some recovered patients may still carry the virus.

Doctors and researchers are racing to find effective therapies as well as vaccines to eventually get the virus under control. They are closely studying clinical cases in Wuhan in hopes of better understanding the virus and solving the mysteries surrounding it. Such efforts will help other places now fighting their own battles against Covid-19.

It’s too early to declare victory, but in a city under lockdown, regular people have been helping battle the epidemic. Caixin published portraits of eight ordinary people that have struggled amid the outbreak. The stories show how countless numbers of ordinary people have stepped up to the challenge created by the epidemic to become heroes in their own ways, often at great personal risk. Their efforts have helped get the central Chinese metropolis of 11 million people back on its feet after spending 50 days cut off from the rest of the country.

The battle is still ongoing. The focus in China has shifted from dealing with local outbreaks to dealing with a global pandemic and a growing number of imported cases. It’s likely that China won’t change its tactics for months. Wang Shuo analyzed how the fundamentals of dealing with Covid-19 will be positioned for the long term. Europe and the U.S. are looking at 12 to 18 months, and China should also prepare for the long run.