In Depth: How the U.S. Missed Its Window for Taming the Covid-19 Virus 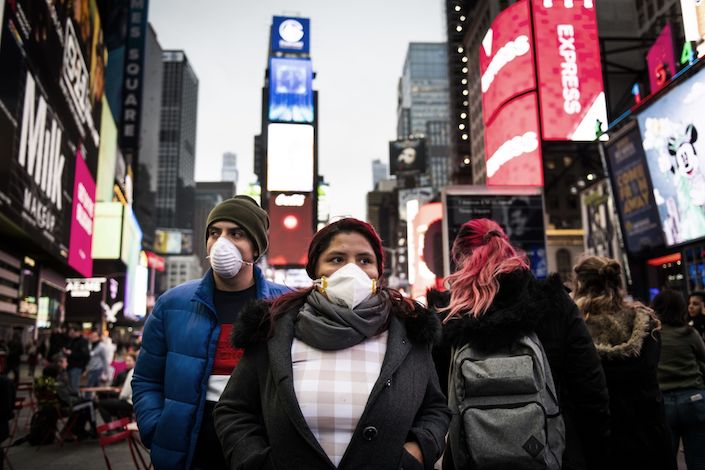 It took 54 days from the time the first Covid-19 case appeared in Wuhan Dec. 1 to the complete lockdown of the central China city of 14 million people Jan. 23.

It also took 54 days from the report of the first American case in Seattle Jan. 20 until U.S. President Donald Trump declared a national emergency Friday.

That’s about where the parallels end, according to public health experts. While China mobilized its 1.4 billion people over the past two months to successfully fight the burgeoning coronavirus pandemic, the American government has come under fire for a dithering response, even with a head start.

After quickly imposing travel restrictions in early January, the U.S. government’s epidemic prevention efforts stalled. The handling of West Coast outbreaks at a nursing home and on a cruise ship suggested officials failed to learn the lessons from similar situations in Asia. Complaints of insufficient tests, shortages of masks and other medical supplies and inconsistent comments from the Trump administration created uncertainty and panic.

The roller-coaster ride on Wall Street in the past month suggests investors lack confidence in the government’s response. Just a month ago, the S&P 500 hit a record high of 3386.15 on Feb. 12. Now, all major U.S. indices have fallen more than 20% from recent peaks, sending stocks into a bear market.

American consumers rushed to stock up on food, necessities and sanitation products as reports of the epidemic grew ever darker, creating shortages of toilet paper and hand sanitizer. All kinds of events were canceled, ranging from book fairs to church services to business conferences to almost all sporting events.

At the same time, quarantine and prevention measures have been otherwise relatively limited and inconsistent across the country. The U.S. government declined to suspend the highly vulnerable cruise ship industry. Decisions on how to contain the coronavirus have largely been left to state and local officials with little leadership from the federal level.

California’s Sacramento County even called off an automatic 14-day quarantine requirement for people who were in close contact with confirmed cases, saying it would focus instead on mitigating the Covid-19 impact. The health department of King County, Washington, is taking a similar stance, advising people to stay at home if they’re sick.

The strategy the U.S. is taking on Covid-19 is basically in line with its approach in the H1N1 flu epidemic of 2009 and the H7N9 bird flu of 2013, focusing on care for seniors and people with underlying illness, said Zhang Zuofeng, dean of the University of California, Los Angeles, School of Public Health.

Are the actions being taken now too late, and what needs to be done? The answers will depend on whether newly expanded testing capability shows how extensive the U.S. epidemic really is in the next couple of weeks, public health experts say.

The U.S. reported 2,330 confirmed cases and 50 deaths as of Saturday, ranking it the eighth-most infected country in the world. That’s well behind Iran and Italy, the two most-infected countries outside China. But until March 11, the whole of America could test no more than 300 to 500 cases a day.

The limited testing has raised speculation that large numbers of infected people have not been identified. With most parts of the country only now haltingly starting to restrict gatherings and close schools, the reported totals might be just the tip of an iceberg of how far the disease has actually spread in the country, authorities say.

The U.S. was among the first countries to respond to the outbreak in early January. The Centers for Diseases Control and Prevention (CDC) issued a level 1 watch alert as early as Jan. 6, urging U.S. citizens traveling to Wuhan to take precautions. The CDC also started to screen passengers from Wuhan at three airports Jan. 17.

In less than two weeks, the Trump administration declared the coronavirus outbreak a public health emergency, banning the entry of foreigners who had traveled in China within 14 days and requiring quarantines for American citizens who had been to Hubei province. It was the first quarantine ordered by the federal government in more than 50 years, since a quarantine for smallpox in the 1960s.

Ultimately, containment measures such as travel bans can only buy time for preparation, which should be used wisely to prepare for possible local spread almost anywhere, Rand Corp. researchers Jennifer Bouey and Courtney Gidengil told Caixin.

But it wasn’t until last week that Trump declared a national emergency, freeing up $50 billion to help fight the pandemic. That boosted the stock market to post its biggest rally since 2008, rebounding from the worst day in more than 30 years.

“To unleash the full power of the federal government, I am officially declaring a national emergency,” Trump said at the White House. CEOs of the country’s largest retailers and pharmacies pledged to make available drive-through test sites to “dramatically increase the availability of tests.”

The northwestern state of Washington, where the first case was found, has been hit the hardest, with the largest number of confirmed cases and about two-thirds of the country’s fatalities. Among the 35 deaths reported there as of Saturday, 27 were linked with Life Care Center of Kirkland, a long-term care and nursing facility about 20 miles from downtown Seattle.

What happened at the nursing home during the past month is a microcosm showing how the failure to do testing in a timely way might have made America miss the window for preventing community spread.

The nursing facility with 108 residents and 180 staff started to report deaths of elderly residents Feb. 19. But it didn’t finish testing all residents until Saturday. Some people died at the facility even before they could be hospitalized. Most were confirmed with Covid-19 infections only after their deaths because of the initial lack of testing capability.

The public health department of King County, where the nursing facility is located, said Saturday that all 95 remaining Life Care residents have been tested. Of those, 47 tested positive, and results are pending for five people. Testing for symptomatic staff has been provided but not concluded.

Pat Herrick’s 89-year-old mother Elaine Herrick, a longtime resident at the nursing home, died March 5. Hours after Pat got a call from the nursing home reporting her mother’s death from “natural causes,” she and several others with family members who also died gathered reporters outside the facility, pleading for clarification of their family members’ deaths. Herrick blamed the government’s lack of action for the tragedy.

The U.S. government’s handling of the spread of the virus on cruise ships offers further evidence of a failure to learn lessons from Asia. On March 6, 21 people aboard the Grand Princess cruise ship off the coast of San Francisco tested positive for the new coronavirus. After being stuck on the ship for days, more than 3,500 people of more than 50 nationalities eventually were allowed to disembark for quarantine at hotels or military bases.

Only a few of the people directing passengers’ departure wore protective suits and masks. Some passengers were not required to be tested. Local health officials said testing facilities across California were running at full capacity and couldn’t test all the passengers.

That was the second cruise ship of U.S.-based operator Princess Cruises Inc. that carried passengers and crew infected with the coronavirus. More than 700 people aboard the other ship, the Diamond Princess docked in Japan, were confirmed infected with the virus in early February. This month, it was reported that some crew members on another Princess cruise ship might have also worked on the two vessels that already had outbreaks.

And yet, America’s cruise industry has not suspended operations. After meeting with industry executives March 7, Pence decided to require enhanced screening of passengers but to continue allowing cruise ships to operate as normal.

Mitigation rather than quarantine

With limited hospital beds and other medical resources, home quarantine has become a preferred strategy for Americans with minor symptoms. As most of the country is relatively less densely populated, home quarantine should work better than in China, UCLA’s Zhang said.

The U.S. has about 45,000 staffed intensive care unit (ICU) beds nationally, which could be ramped up in a crisis to about 95,000. Because of a strong, late flu season, hospitals are already operating at 95% of capacity or higher, CDC Director Robert Redfield said at a Congressional hearing March 10.

“We really don’t have a lot of resilience in the capacity of our health-care system,” Redfield said.

Health experts estimate that 200,000 Americans might need ICU care in a moderate outbreak. A recent report from the Center for Health Security at Johns Hopkins University in Baltimore estimated that there were about 160,000 ventilators available for patient care. That might seem like a lot, but many have already been in use for flu patients, and a severe pandemic could quickly overwhelm capacity, experts said.

Not everyone is pessimistic. Amesh A. Adalja, an infectious disease specialist at the Johns Hopkins University Center for Health Security cited the 2009 H1N1 pandemic.

“Hospitals were stressed, but we didn’t run into a situation where there were no beds,” he said. It is hard to know exactly how many hospital beds will end up occupied by coronavirus patients, but proactive management of patient surge with creative use of hospital bed space might be part of the solution, he said.

But Adalja warned that the Covid-19 virus has proved uncontainable.

“There is no specific action the U.S. could take to contain the virus,” he said. “The stress must be on medication, hospital preparedness, increasing diagnostic testing, vaccine development, antiviral trials, and public health communication.”