Restaurants in China Are Reopening, But Finding It Hard to Recover Business 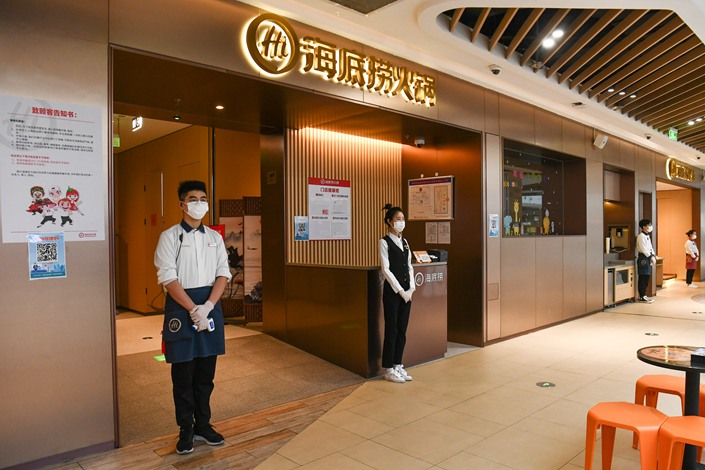 Restaurants in China are gradually reopening as new Covid-19 infections wane, but they are finding it difficult to reach even half of their pre-outbreak revenues.

Popular hot pot chain Haidilao International Holding Ltd., for example, opened a first batch of 85 locations for dine-in customers in 15 cities on Thursday after closing them in late January. It has reopened about one-sixth of its restaurants in China, with all locations in the major cities of Beijing, Shanghai, Guangzhou and Shenzhen still shut, though the company said it will reopen more according to each city’s virus control policies.

Xibei Youmiancun, a northwestern Chinese cuisine catering brand run by Xibei Group, had resumed regular operations at 167 of its 376 branches as of Tuesday, with another 160 only accepting takeout or delivery orders. Xibei Group chairman Jia Guolong complained to local media in early February that daily revenue had fallen to around 2 million yuan with some 100 stores fulfilling delivery orders, “a drop in the bucket” compared to average daily revenue of 20 million yuan before the outbreak.

More and more restaurants have worked to resume business as usual, with most of China outside Hubei province returning to work in recent weeks, but multiple restaurant chains have told Caixin their cashflow remains well below half of what it was prior to the outbreak, even after adjusting strategies and shifting focus to deliveries and catering. The loss of dine-in business has far outweighed revenue from new experimental initiatives.

Higher-end restaurants may have taken the biggest hit. Dong Shaobo, a senior executive for famous Peking duck chain Dadong, said the company’s “income is close to zero, or 99% below normal.”

High-end dining establishments like Dadong have found it more difficult to adjust to business models driven by delivery platforms. Dong Shaobo explained to Caixin that they have a different business logic than takeout providers and are not doing well in terms of competition for online traffic and orders. For example, they have to change their menus more drastically than others and adjust their dishes to serve much smaller portions to match the demands of customers eating in smaller groups at home. Dadong has resumed dine-in service in some restaurants, but found few customers.

Strict virus containment measures and difficulties resuming work make fully resuming dine-in service unrealistic for many restaurateurs. Hospitality businesses across China have been forced to innovate in terms of menus and marketing channels in order to make ends meet by scaling up online.

According to the China Cuisine Association, food deliveries now account for over 60% of catering business, whereas before the outbreak it was only 10% to 15%.