By Jia Tianqiong and Isabelle Li 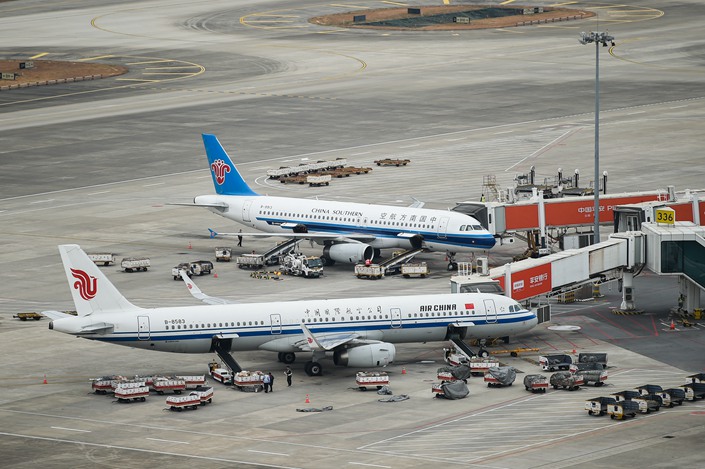 China may be recovering from the worst of its coronavirus outbreak but the gradual resumption of business and production has not helped domestic airlines make ends meet.

This year, the country’s six listed mainland airlines had lost a combined 22.3 billion yuan ($3.14 billion) as of Tuesday, according to analysis by the NUAA-VariFlight Joint Research Centre for Transportation Big Data based on past financial reports.

But insiders say that given massive fixed hangar fees, airlines have little choice but to continue running flights at a reduced rate just to maintain operations and pay their bills.

Flight numbers in the mainland have remained relatively low since March 3, after weak growth at the end of February when many people in China returned from their hometowns after an extended Lunar New Year holiday intended to arrest the spread of the virus.

For the week of March 12 to 18, the number of flights taking off fell 1.4% from the previous week.

The Civil Aviation Administration of China (CAAC) disclosed (link in Chinese) on March 12 that mainland flight volumes had only recovered to about 40% of their normal levels. About two-fifths of flights scheduled by China Eastern Airlines actually flew, while about half of those for Air China and China Southern Airlines did, according to VariFlight’s data.

A source close to China Southern Airlines told Caixin the Guangzhou-based carrier had suffered daily average losses of nearly a hundred million yuan since Wuhan went into lockdown in late January, triggering a wave of other quarantine measures across the country. The state-run group had already lost between 6 to 7 billion yuan by the start of the month, and full quarter losses could be more than 10 billion, the source said.

Virtually frozen travel demand as a result of the pandemic was the main reason for the airlines’ struggles, said VariFlight analyst Zheng Hongfeng. Business trips have been limited due to cashflow pressure across the business sector, while private travel plans have also been postponed or cancelled since many cities are still taking strict quarantine measures to contain the virus, Zheng said.

Nearly half of respondents to a survey by VariFlight on March 10 indicated they had no travel plans in the near future, while those who did were mostly looking at returning from their hometowns to the cities where they work.

People traveling for that reason also made up the lion’s share of those who flew in the past few weeks, suggesting travel demand could drop further, Zheng told Caixin.

China’s three largest carriers have been undergoing unprecedented operational struggles. Air China, China Southern and China Eastern released February figures on Wednesday showing they were flying far fewer flights, with their available seat kilometers plunging 70% compared to February 2019. An “available seat kilometer” is a measure of passenger-carrying capacity calculated by multiplying the number of seats on a flight by the number of kilometers traveled.

Passenger numbers have stabilized very slightly on domestic flights, Caixin reported previously, but that was mostly down to subsidies paid by CAAC.

“For now, maintaining operations is more important than profit. Parking fees alone are huge with dozens of aircraft sitting quiet on the tarmac. Carriers are losing nearly half a billion yuan every day, continuing operations is the only way to save themselves,” one airline company executive told Caixin.

Many airlines are seeking financial support from capital markets in order to ease the pressure on their cash flow. Several airlines have issued super-short and short-term commercial papers since the outbreak.

However, the aviation industry is expected to continue taking on losses into the future. If the pandemic extends into May, losses in the aviation sector in China alone could amount to more than a hundred billion yuan, industry insiders predict.