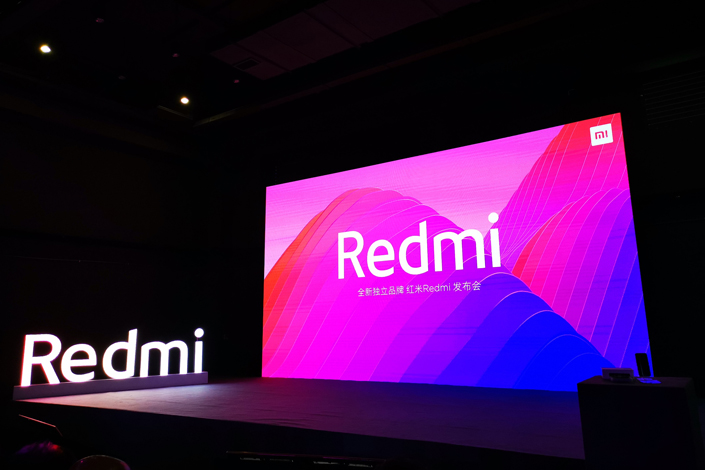 Xiaomi Corp. has launched an immense, 98-inch smart TV at the comparatively low price of 19,999 yuan ($2,829) as part of its ongoing effort to establish itself as a leading brand across a wide range of products.

The company’s Redmi unit launched the product, dubbed “Redmi Smart TV MAX,” during a livestreaming event on Tuesday — choosing to eschew the usual live product debut due to the coronavirus outbreak. The product is set to go on sale by April 9.

At a price of 19,999 yuan, the MAX is the most expensive TV ever launched by Xiaomi. However, it is far cheaper than comparable 98-inch models currently on the market, which typically cost more than 100,000 yuan.

By launching the product, Xiaomi is riding a “bigger-screen wave” that consumers have opted for in recent years, said Liu Buchen, a home appliance analyst. He called the 19,999 yuan price “disruptive” to market incumbents.

However, given that the market for 98-inch TVs is tiny — with annual sales of several thousand units — Xiaomi’s move is unlikely to have a significant impact on the overall television market in China, said an executive at a rival domestic TV manufacturer.

With the MAX’s rollout, Xiaomi aims to give its brand a boost by showing off a more diversified line of products, said the executive, speaking on condition of anonymity. The goal isn’t to grab a bigger share of what currently is a niche market, the executive said.

Xiaomi may not even be able to break even selling the product for 19,999 yuan, the executive said. The manufacturing costs alone for a 98-inch TV probably exceed the MAX’s price.

Xiaomi, which is also one of world’s largest smartphone makers, launched its first TV in 2013. Since then, its share of the domestic TV market has gradually grown. By 2018, Xiaomi had locked up 13.9% of the market, up from 1.6% in 2016, according to data from consultancy firm Sigmaintell.

In August, Xiaomi launched its first TV under its low-budget Redmi brand, which was spun off last year as part of the company’s strategy to transform Xiaomi into a higher-end brand. That Redmi product had a 70-inch screen and a price of 3,999 yuan, about 2,000 yuan lower than comparable models at the time. In October, Redmi lunched a 40-inch TV priced at just under 1,000 yuan.

Xiaomi is aiming at up-market consumers for its own brand, but for Redmi, it’s targeting consumers looking for more bang for their buck, Liu said.

Over the past few years, China’s TV market has been in the doldrums. Last year, the country bought 47.72 million TVs, down by 2% from the previous year, according to data from market research firm Beijing All View Cloud Data Technology Co. Ltd.

Consumers increasingly favor bigger TVs. According to All View Cloud, the average screen size of a TV sold in China last year was 52.1 inches, up from 49.5 inches in 2018.